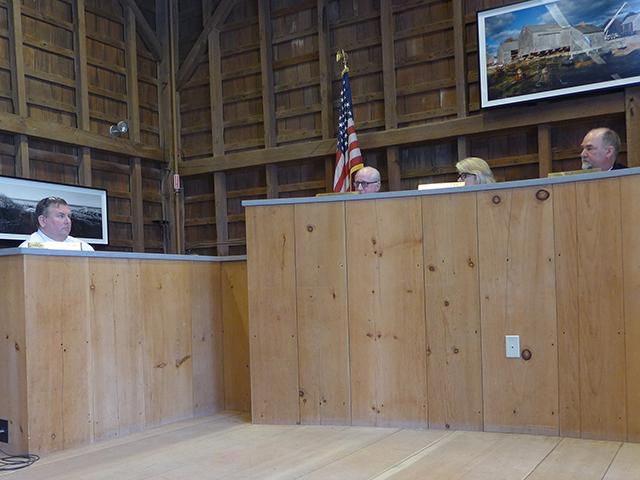 Michael Sendlenski, left, advising the East Hampton Town Board at its meeting on Tuesday. Mr. Sendlenski is stepping down from his role as town attorney next month.
By Jamie Bufalino

The East Hampton Town attorney, Michael Sendlenski, who has helped draft the low-nitrogen septic system and rental registry laws among other legislation since joining the town’s legal team in 2013, announced on Monday that he would be resigning effective May 3. “Michael Sendlenski really distinguished himself over his five-plus years by helping us protect quality of life in East Hampton and by advising us through challenging issues and lawsuits,” East Hampton Town Supervisor Peter Van Scoyoc said yesterday.John Jilnicki, the town’s senior assistant attorney, will serve as acting town attorney until the board appoints Mr. Sendlenski’s successor. A Southampton native, Mr. Sendlenski was an attorney for Southampton Town for seven years before being lured to East Hampton, he said, by Liz Vail, the town attorney at the time. The two had been middle school classmates. He was appointed to his current position in 2016.“While I’ve enjoyed my five years in East Hampton Town Hall, over the past year, I’ve felt the urge to explore opportunities in a more entrepreneurial setting,” Mr. Sendlenski said in a statement released on Monday. His immediate focus after he leaves his post will be to launch a private practice. “There’s nothing more entrepreneurial than starting a law firm,” he said on Tuesday. Financial considerations, including the prospect of paying for the college educations of his daughter, who is a freshman in high school, and son, who is in seventh grade, factored into his decision to enter the private sector, he said. During his time as a town attorney, he said that he had helped the town board coordinate the work of code-enforcement agencies — “from the building inspector to the cops on the ground and the fire marshal” — to address quality of life issues that had been ignored for many years. “So much time and effort goes into crafting legislation, but you can’t just put it in a book on a shelf, and say, ‘There it is.’ You have to enforce it,” he said. The most memorable event of his tenure, he said, was the 2015 town board meeting at which hundreds of residents gathered at the Montauk Firehouse to express their dismay about the increasingly raucous party atmosphere in the hamlet. “To have that many people care so passionately about the town — that’s what makes this place special” he said. At a recent board meeting, during a discussion about the town’s legal settlement with Marc Rowan, the billionaire who bought Duryea’s Fish Market on Fort Pond Bay, Mr. Sendlenski delivered an equally passionate response to Councilman Jeff Bragman, who seemed to question the quality of work of the town’s legal team. His department, Mr. Sendlenski said, has five attorneys “who work very hard, every day, fighting for the people of the town. . . . I cannot sit, and will not sit in this seat and be told that someone in my office didn’t fight hard enough. I won’t sit quietly and let him besmirch my office.”Mr. Sendlenski said, however, that the heated interaction had “zero impact” on his decision to resign. “I’ve been considering going into private practice for 10 years, and I finally formulated a plan over the last year,” he said.