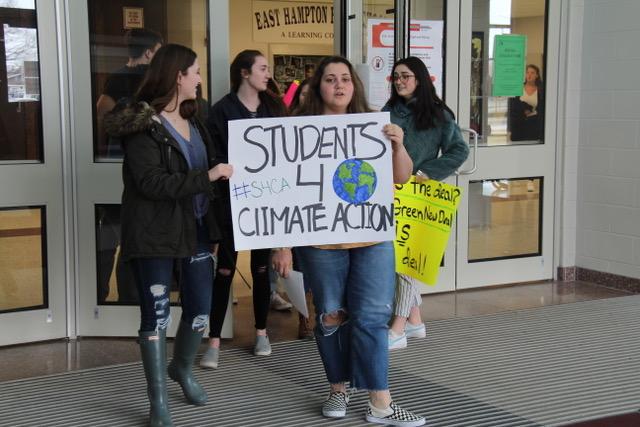 Lucia Ibrahim was one of 14 East Hampton High School students who took part in a worldwide movement to call leaders to action on climate change.
By Christopher Walsh

Perhaps the greatest lesson, for students of all ages, is that one person really can make a difference.The 14 East Hampton High School students who walked out of class on Friday morning were among more than 1.5 million around the world, all of them united by a motivation to call leaders to action on climate change. Each, directly or otherwise, was inspired by a 16-year-old girl in Sweden whose lone act of dissent has ignited a worldwide movement demanding immediate action to sharply reduce the fossil-fuel emissions that are blamed for climate change, manifestations of which are increasingly apparent on the South Fork and around the world. Bearing handmade signs with messages including "Students 4 Climate Action," "Make Our Planet Green Again," "Time Is Running Out," and "Clean Energy Now," the students walked out of the school around 11:30 with Aubrey H. Peterson, a school social worker and adviser to the high school's Environmental Awareness Club. "We demand clean energy!" they chanted. Students in the Environmental Awareness Club are clearly engaged with the subject. Told that the president has called climate change a hoax invented by the Chinese to put American businesses at a competitive disadvantage — one of several explanations he has offered, all free of supporting evidence — Brody Eggert, a sophomore, had a ready answer: "Ninety-seven percent of scientists disagree with that." Climate change will affect the entire planet and its inhabitants, but residents of East Hampton have particular reason for concern. The town is acutely susceptible to sea level rise and, as demonstrated by Hurricane Irene and Superstorm Sandy, in 2011 and 2012 respectively, extreme weather events loom over the town's environmental and economic well-being alike. Another threat to the local economy is fossil fuels' impact on the ocean and the life within it. National Geographic reported this month that marine heat waves have increased by more than 54 percent in the last 30 years, one mass of warm water off the West Coast causing massive die-offs of a multitude of fish and mammal species. "By the year 2048," said Kate Ward, a senior, "the fishing industry will collapse due to climate change and we'll have no seafood." Her statement echoed multiple ecologists' prediction of dead oceans within 30 years absent radical action on emissions and a transition to renewable energy, a prediction disputed by fishing interests. The Environmental Awareness Club is aligned with the Suffolk Student Climate Action Coalition, a group that has "banded together to try and make a difference," said Mr. Peterson's son, Aubrey W. Peterson, a sophomore. The coalition is "basically doing what we're doing now," he said, "protesting, doing different activities that could help save our environment, one protest at a time, one legislative bill at a time." The students are versed in the town's Energize East Hampton portfolio, which includes free home energy audits, incentives to install solar panels, and a push for wind power. "We're working toward 100 percent renewable energy in East Hampton," one said. "We're not there, but we're working toward it." Mr. Peterson told a visitor that, at the behest of Linda James, chairwoman of the town's Energy Sustainability and Resiliency Committee, the Environmental Awareness Club presented 600 signatures advocating both wind power and an investigation into the installation of solar panels at the high school. Across the Atlantic Ocean, 16-year-old Greta Thunberg launched a lone protest against her government's inaction on climate last August, a "school strike for climate" outside the Swedish parliament building. Four months after beginning her protest, she addressed the United Nations Climate Change Conference in Poland and, in January, the World Economic Forum at Davos, Switzerland, where she arrived by train and wasted no time in scolding the bankers and investors in attendance for their role in environmental destruction. Last Thursday, she was nominated for a Nobel Peace Prize. Back in East Hampton, members of the Environmental Awareness Club said that they were aware of Ms. Thunberg and her activism. But a mantra of the environmental movement — "Think globally, act locally" — was also evident. "Did somebody inspire you?" they were asked. "Mr. Peterson," was the reply.