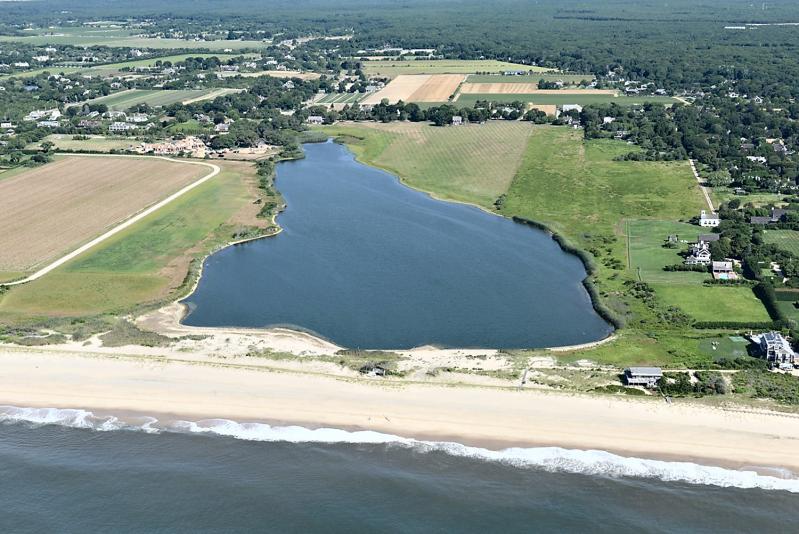 A Wainscott resident and candidate for the East Hampton Town Trustees has proposed to that body and to the town board a pilot project intended to mitigate the harmful algal blooms that have beset Wainscott Pond in recent years. “We have a problem,” Simon Kinsella told the town board at its April 18 meeting, “a dangerous situation” that “has been brewing for the last decade.” Wainscott Pond, he said, has the worst water quality of any body of water in the town, and is particularly bad at its northern end, where circulation is poor and phragmites proliferate. Mr. Kinsella said that a group of property owners has banded together to form a nonprofit organization, as well as a remediation plan, the latter including both long-range actions and “an immediate solution” in the form of a filtration system. That, he said, “will remove blue-green algae from the pond, and have an impact straightaway.” Blue-green algae, or cyanobacteria, are toxic algae that have fouled many water bodies on Long Island, including Georgica Pond. Mr. Kinsella said that his group, the Wainscott Pond Project Inc., was inspired by Friends of Georgica Pond, a group of property owners that has engaged Christopher Gobler of Stony Brook University’s School of Marine and Atmospheric Sciences to monitor that pond and develop mitigation efforts. Unlike one strategy employed in the Georgica Pond effort, an aquatic weed harvester that removed macroalgae in 2016, 2017, and again last year, Mr. Kinsella proposed a scheme that he said has been widely employed in Europe and Australia, but is rare in the United States. Where the aquatic weed harvester in Georgica Pond was like running “a giant sieve around the pond,” this approach was akin to “running the pond through the sieve.” A filter approximately nine feet long, two feet wide, and two feet high would process between 100 and 1,000 gallons of water per minute, Mr. Kinsella said. Dr. Gobler’s team would be involved in the program, he said, in conjunction with the trustees and the State Department of Environmental Conservation, which he said has given “tentative approval” to the plan. He was confident about the plan’s efficacy, he told the board, but could not know to what degree “until you run it in a live environment.” If successful, “you could use this same technique as an immediate solution of cleaning cyanobacteria out of water bodies,” he said. Supervisor Peter Van Scoyoc was unconvinced. The machinery would act “like a giant swimming pool filter?” he asked. Impacts would have to be considered, he said. “You’re not only filtering out harmful bacteria,” he said. “You could be filtering out invertebrates, larval fishes, larval insects. . . . This is a natural water body, essentially turning it into a pool. . . .”Mr. Kinsella said he had recently learned that a natural resources special permit might be required for the project to proceed, and that that could take at least two months to obtain. At that point, the summer season, when harmful algal blooms typically appear, would be well underway and the opportunity to test the project lost. “It may delay us an entire year, and puts us in a precarious situation,” he said, asking that any review and permitting be expedited. “If there are extenuating circumstances that would justify asking for an expedited review, that would be entertained,” the supervisor said. “If you’re saying there’s a public health issue . . . a public health component might be reason to put it at the top of the list.” Four days later, Mr. Kinsella told the trustees that the project is intended “to buy us time” to implement and see the benefits of longer-term mitigation measures. The program would increase circulation in the pond, he said, “taking from the south end and putting it in the north.” The filtration system would be situated on the shoreline, he told the trustees, with only a pump in the pond itself, suspended by a buoy. Jim Grimes said he was concerned that the system would extract fish larvae’s food sources along with its intended target, “which may not matter because you’re probably going to be sucking up the fish larvae too.” He likened the proposal to “something out of ‘Star Wars.’ ” Why this system, he asked, and not an aquatic weed harvester as used in Georgica Pond? The environments are different, Mr. Kinsella replied. The strategy in Georgica Pond was to remove macroalgae, a move driven by the belief that the release of nutrients as they decompose is nurturing and promoting cyanobacteria. “We don’t have a macroalgae problem,” he said. “We have a microalgae problem, which starts very early in the season.” Mr. Grimes said he would like a more complete explanation of “the collateral issues” in such a plan.  Francis Bock, the trustees’ clerk, said that the board should solicit input from Dr. Gobler “before we move forward.”