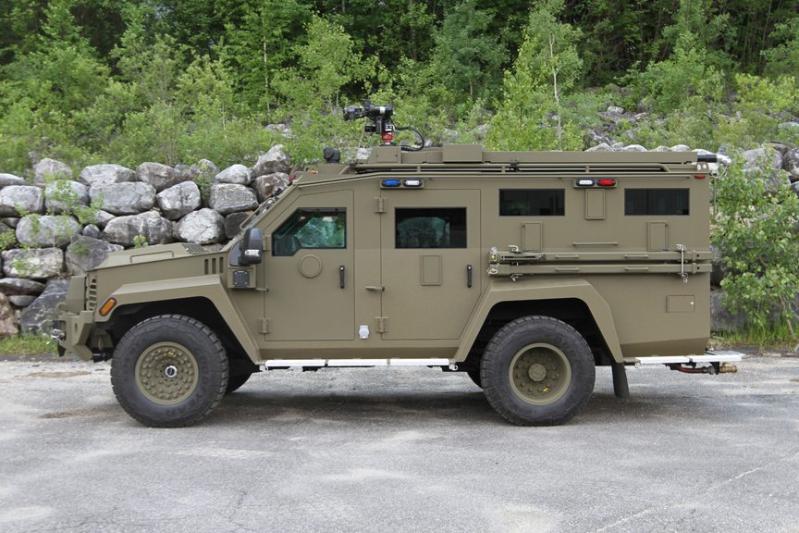 The East Hampton Town Board tabled a vote on accepting a donation of more than $300,000 at its April 18 meeting, but the matter has resurfaced on the agenda of its meeting tonight. “An individual has come forward who desires to donate funding for a high-quality piece of equipment that would specifically assist with school safety and/or the potential for improved response to a school safety situation,” the resolution begins. The equipment in question: a Lenco BearCat, or Ballistic Engineered Armored Response Counter Attack Truck, an armored vehicle designed for military and law enforcement applications. The donation, according to the resolution, would be $307,700. In the post-Sept. 11, 2001, world, terrorism and regular mass shootings have prompted a “militarization” of police departments, which are often now equipped with weapons of war, some of it surplus equipment from the armed forces. The trend is controversial, and at the April 18 meeting, one resident raised objections. David Buda of Springs, a self-styled government watchdog, called the planned donation “a very extraordinary event, one well-heeled person donating $300,000 to the town for an armored vehicle.” Mr. Buda raised no objection to the equipment itself; rather, he questioned the wisdom of accepting “such a large, special donation without disclosure.” The donor, he said, should be announced and congratulated. “You have to wonder,” he asked. “Are they possibly in a position to expect something in return?” In an April 20 email to the board, Mr. Buda wrote, “I see the potential acceptance by the town of a ‘completely anonymous and confidential’ donation in excess of $300,000 as being the antithesis of ‘complete transparency.’ It is also fraught with potential problems that the rules mandating ‘full disclosure’ of all municipal financial transactions were designed to eliminate.” He further questioned whether the town “truly needs such a vehicle, how will it be used, where it will be stationed, and when will it be deployed.”In response, Councilwoman Kathee Burke-Gonzalez shared with Mr. Buda and her colleagues on the board an April 20 email from Chief Michael Sarlo of the Police Department. The BearCat, Mr. Sarlo said, would replace an aging and outdated armored response vehicle that was originally donated to the Sag Harbor Village Police Department “as a member of the East Hampton [emergency services unit] team.” All such units, he wrote, “have a tactical response vehicle which allows the team to deploy as close to a dangerous situation as possible.”Though the donor seeks anonymity, “the three chiefs of police have met with him, vetted him, and reviewed his offer with the town and village board members,” the chief wrote. “When he reached out with an offer to donate funds, his focus was on school safety and the police departments. The three chiefs reviewed all of our current and planned safety costs and potential improvements, and the donor decided this was the best use of his donation funds. He did not want to just donate small yearly amounts to each agency or school district, but rather provide us with something which would be difficult to obtain within our budgetary constraints and the challenges of a shared services model . . . across three departments and numerous school districts.” He estimated the vehicle’s useful life span at 15 years. “If we want a self-sufficient team that can adequately respond to an active shooter, barricaded subject, school threat, etc., the team needs a vehicle like this one,” he wrote. In a response later that day, Mr. Buda praised the chief, but again questioned the appropriateness of the planned donation. “Further research into the legal question of whether a municipality may accept gifts in excess of $75 from any donor who conditions that gift on it being ‘completely anonymous and confidential’ should be undertaken by the town attorney,” he wrote to the board. Responding to an April 23 email to Supervisor Peter Van Scoyoc seeking comment, Joanne Pilgrim, the supervisor’s executive assistant, wrote, “There is an ongoing discussion/evaluation of this situation, with the town attorney and board members talking about the relevant legal precedents and decisions.” The situation was unchanged as of yesterday, she said.