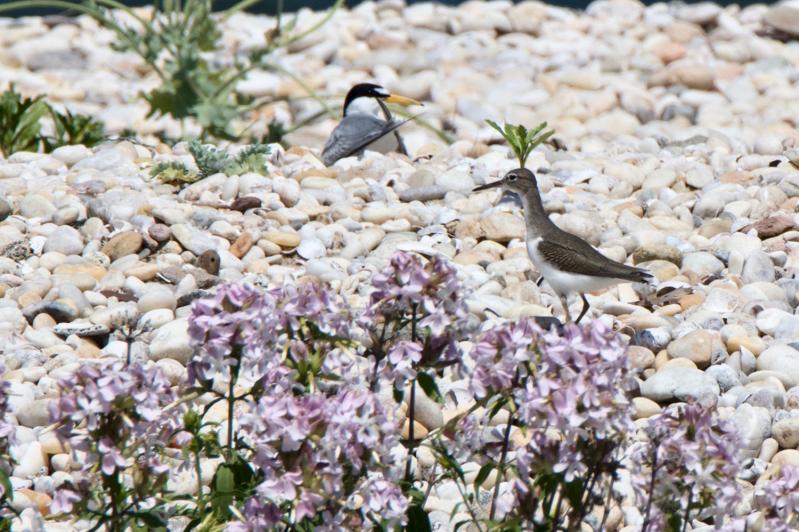 As the birder Terry Sullivan says, “Just how common is the common tern?” This one, center, was spotted at the least tern colony on Long Beach in Noyac.
Terry Sullivan
By Larry Penny

For the last 81 and 67 years, annual end-of-the-year, or Christmas, bird counts have taken place without fail in two nearby areas, Quogue to Water Mill, and Central Suffolk. The count area for each and every such count throughout North America for more than a century now has been a circle, 15 miles in diameter, centered in the same spot year after year.

These two areas are the ones where starting in high school I learned to count birds religiously by species. Almost all of the original counters, including Roy Latham, Gil Raynor, Dennis Puleston, Roy Wilcox, Chris McKeever, and Paul Stoutenburgh, are no longer with us, but the annual tradition lives on and over the years has become a worldwide event.

We were called naturalists, our studies of natural histories were serious hobbies, and we had regular jobs in between counts. Roy Latham was a potato farmer, Gil Raynor was a weatherman, Dennis Puleston was a world traveler, Roy Wilcox a duck farmer, Chris McKeever a lawyer, Paul Stoutenburgh a high school teacher, and Eric Salzman a classical music composer. I was one of those rarities who had formal training at graduate school, but the aforementioned were the true masters.

Now there is a whole new collection of birders. Some are professional scientists, but most are part-time naturalists, and there are as many women among the counters as men. Steve Biasetti of the Group for the East End is the compiler of the Quogue to Water Mill count, and Eileen Schwinn is the compiler of the Central Suffolk count. Because I started my natural history career as a teen with these two counts, I’ve lost track of them over the years. Thanks to Steve and Eileen for bringing me up to speed.

Just looking at the numbers on the tally sheets gives one a good sense of what’s been going on bird-wise locally for the last half of the 20th century and the beginning of the 21st. The number of species in each count has grown as the number of participants has grown from a handful to more than 25 or so. While Roy Latham used to do the Orient count by himself, at least 30 observers do it these days.

But not only that, one gets an idea of which species are in trouble, which are ruling the environment, which are extending their ranges, which are increasing in numbers, which are decreasing, which are new to the area, and which have almost disappeared. As Long Island changes from rural to suburban, the composition of its birdlife varies accordingly.

Everyone knows the nonmigratory common crow. The Q-W count recorded 666 of them, the CS count, 143. In 1995, the CS tally was 10,327. I’ve been told that this ubiquitous U.S. species has been dwindling, and the CS count agrees.

But the common crow has been joined by the more urban fish crow from the South during this century, and though none showed up on the Q-W count, three were present in the CS count area, while 94 had been counted in that area in 1989.

A third crow species, the raven, not too long ago listed in New York State as threatened, has been populating Long Island in this millennium. Four showed up in the Q-W count, nine in the CS count. Its newness here is substantiated by the fact that on both counts it has appeared only seven times on the 2012 counts and later.

The Southern bird that has stolen the show in the North thus far is the red-bellied woodpecker, tallied to the tune of 25 in the Q-W territory, 85 in the CS area. While the downy woodpecker is still king in the Q-W area, it lost out to the red-belly in the CS area, 85 to 80. None of our other three woodpeckers, hairy, flicker, or sapsucker, came close.

The robin is perhaps the best-known songbird of these parts and one of the first to arrive from the South each year in the spring. But lately as the winter climate softens, many of this species stay in our latitude. Hence 369 showed up in the Q-W count, 164 in the CS one.

A closely related species, the Eastern bluebird, our state bird, was reduced to a handful of individuals in the 1970s, the days of DDT on Long Island. Helped by birdhouse installation and other protections, they have made a good comeback. While only 8 were counted in Q-W, the CS area turned up 64, the most ever recorded.

While mallards have been trying very hard to overcome the black duck for supremacy locally, black ducks outscored them 804 to 704 in the CS territory and 431 to 381 in the Q-W.

The three species of scoters, or “coots,” as some hunters refer to them, are showing signs of decline. Once our most common sea duck and diving duck, 291 and 165 were counted in the CS and Q-W territories, respectively. What used to be called oldsquaws because of the sounds they made, but are now called long-tailed ducks out of deference to Native Americans, continue to be common in tidal waters, and 369 and 364 were tallied in the Q-W and CS marine territories.

Buffleheads, ruddy ducks, and hooded mergansers are small saltwater ducks hereabouts — 1,298 and 443 of the former were counted in the CS and Q-W territories, while 466 and 445 ruddies were tallied in those two territories, and, finally, 208 and 196 hooded mergansers were found in the two areas. In evolution, closely related forms get smaller and smaller. Is this happening here?

Common eiders are an example of Northern sea ducks, and they have been extending their range southward, like the great cormorant and various seal species. They are catching up in numbers to the scoters, it would seem. In this century, they have been breeding as far south as Fishers Island, and now 296 and 188 of this species were counted in the CS and Q-W territories.

Now that bald eagles are once again breeding on Long Island, they show up more and more in these counts. Ten were seen in the CS zone, six in the Q-W zone. Turkey vultures are rather new on Long Island and very rarely seen in the winter, as they are migratory. However, 17 and 2 were counted in the CS and Q-W areas. Turkeys are not at all related to the turkey vulture, but after repeated reintroduction on Long Island from 1991 on, the CS zone saw the most ever counted, 168, while 36 were in the Q-W count.

Finally, two longstanding expatriates from Europe apparently will be around for a long time. The starling and the rock pigeon were observed in both counts, the former species accounting for 787 and 1,647 individuals in the Q-W and CS counts, while the latter species came in at 156 and 118. Our native pigeon species, the mourning dove, a migrant, came in at a respectable 277 and 115 individuals in the same two territories.