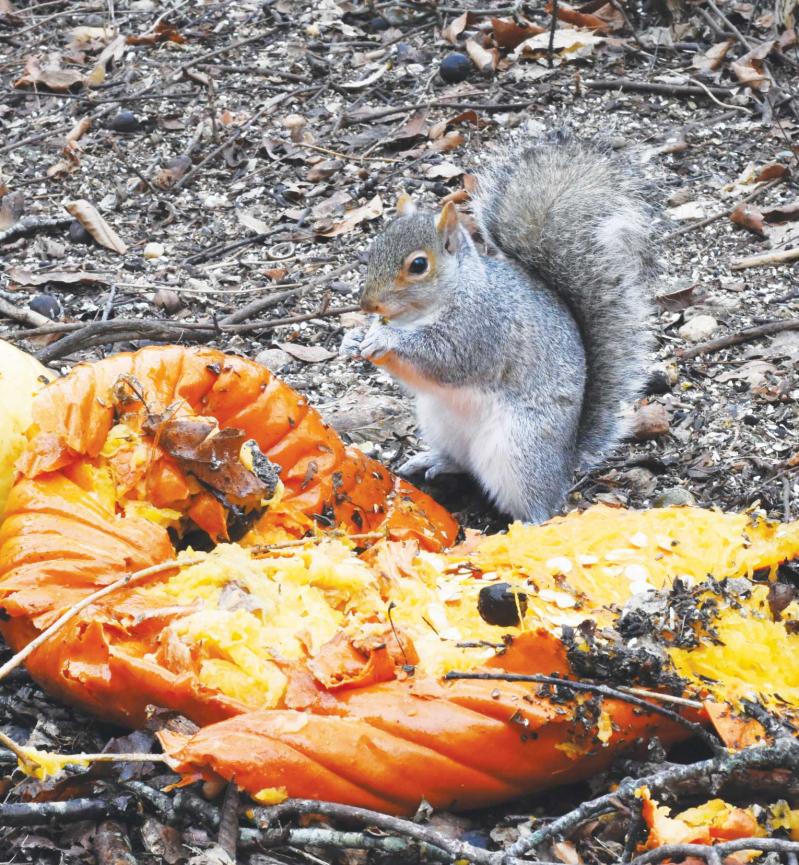 The seeds in a rotting pumpkin can feed an adult squirrel for several days.
Jean Held
By Larry Penny

Gray squirrels are found throughout the United States and in England. I have three in my yard this winter and they always serve as a source of amusement. They can run up and down the backyard trees as fast as they can run over the ground. Two seem to be a pair, the odd one is the subject of the other two’s affection. It tries to fit in, but is never fully accepted in the circle of squirrel games that transpire over the course of the day.

Squirrels are the closest thing to monkeys that I can think of in our area. Not only are they consummate climbers but they can also jump from branch to branch and tree to tree, using their furry tails as ailerons to guide them as they fly through the air. Just about everyone who feeds birds also feeds squirrels, not because they like them, but because the squirrels are so darn smart that they can figure out a way around almost any birdfeeder made to keep them away from the feed.

In captivity a gray squirrel can live to be 20 years old or more.

Squirrels are great tightrope walkers, in fact, great tightrope runners. There is a fence with a long horizontal bar running from one end of my backyard to the other. The squirrels often chase each other from one side of the property line to the other practically as fast as they can run over the ground. And they are no slouches when it comes to running; they can run almost as fast as the cottontail rabbit that occasionally visits the yard and much faster than any human, I would bet.

Squirrels are quite pretty in their gray suits with white-hair tips and other markings accompanying the gray. The sides of their faces are brown and the bellies and chins white. They have very few predators because they hang around where there are trees to climb and most of their would-be predators can’t climb trees, or if they can, can’t run up and down them nearly as fast as squirrels can. Since squirrels are rarely active at night, they don’t fall prey to great horned owls, but during the daylight hours they are susceptible to another feathered predator, the red-tailed hawk. Perhaps the biggest preyers on squirrels are neither mammal nor bird, but motor vehicles, as run-over squirrels are among the most frequent roadkills in my annual roadkill counts. Whenever there is a bad acorn crop one can expect to find more dead squirrels on the highways and byways.

Squirrels are big acorn storers and eaters, in the way that blue jays and chipmunks are. If they spend most of their downtime in a tree hole or leafy drey, that is where they also put some of the acorns they collect. When acorns are scarce, the jays fly elsewhere to find food. In suburbia squirrels get most of the winter victuals from bird feeders. It came as a surprise to me when I saw several squirrels (not as many as the crows, mind you) work over the rotting pumpkins left in a pumpkin field after the Halloween festivities had passed. One pumpkin will feed an adult squirrel for several days.

You almost never see a baby gray squirrel. The little squirrels born in the fall spend their wintertime with their mothers in holes or dreys. Chipmunks hibernate as woodchucks do in winter. Squirrels don’t, even though they are in the woodchuck family. You may have read or heard that the gray squirrels in Central Park and other New York City parks can get spoiled to the point where one will climb up on your lap and grab part of your sandwich. I guess if you hang around humans long enough you pick up some of their poorer habits. On the other hand, like blue jays they utter non-melodic “kaas” to warn other prey species when predators are in the area.

We don’t have red squirrels or fox squirrels on Long Island, though they are upstate, but we occasionally see black gray squirrels. How is that possible? They are mutants of the gray squirrel, not a separate species, and they tend to be more northern in distribution, as black fur absorbs more solar radiation than gray fur. Several mammalian species are black­er the more northern their distribution, hence the black Lab­rador.