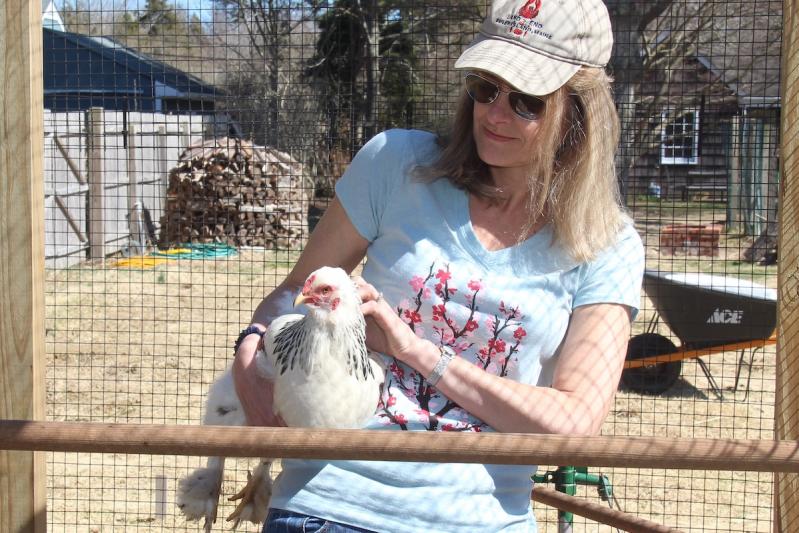 He ought to know: As a middle schooler, the East Hampton resident raised chickens on what was once his grandfather's dairy farm, between Sherrill Road and Osborne Lane. He even published the Poultry Press, a typed periodical covering all things fowl. "Lou-Lou, a small bantam hen, got caught in a sticky fly tape the other day," one report from 1978 begins. "Luckily, she was discovered and unwrapped."

With his wife, Ashley Milne-Tyte, he still lives on the property, and last year resurrected his avian avocation after completing Cornell Cooperative Extension's Master Gardener Program. Last month, the couple launched a roadside stand to sell the eggs produced by their 27 hens.

At Tiny House Farm, a piece of Charlie and Sons-owned property off  Spring Close Highway in East Hampton, Nikki Seelbach and Matias Whitmore raise 10 hens, the near-daily offerings of which are given to employees of the landscaping and gardening company.

Like oyster farming, raising chickens is a growing phenomenon on the South Fork, with poultry practitioners describing a low-maintenance operation that has multiple benefits of the environmental and gastronomic varieties, with little if any downside.

Would-be keepers of chickens are advised to check with their municipality before setting up shop, however. While East Hampton Town's concern is specific to a coop's size — a structure greater than six cubic feet would require a building permit — Sag Harbor Village limits the number of chickens on a parcel to one per 3,500 square feet and no more than 18, and roosters and commercial sales of any poultry products are prohibited. The size, location, and setbacks of a pen are also regulated. Southampton Town regulates structures' size and distance to property lines, as well as commercial activity.

Chickens must also abide by the rules for cats and dogs, a town official told The Star. "If they're excessively loud or stinky," she said, "your neighbors can complain, but residents are allowed to have chickens."

"These are like walking recyclers," Mr. Filer said of his flock, as a mixture of Rhode Island Red, Barred Rock, Buff Orpington, and Speckled Sussex scratched the dirt of a garden, aerating the soil. They are also effective composters. "We have very little food waste now, because everything goes to the chickens: carrots, celery, even leftovers — rice, pasta, bread, they love it," he said. "Of course, that ends up getting converted to their manure, which goes on the garden. You can put it on your lawn, turn it into mulch, compost it. If a person likes to garden and doesn't want to use chemicals and fertilizers, it's a great way to improve the soil."

Ms. Seelbach's parents kept between 30 and 50 chickens while she was growing up in Rhinebeck, N.Y. "This is my first time with my own flock, but I knew the gist," she said. "The initial setup is kind of hard — they need shelter, water, and food — but they don't need to be watched constantly."

A coop, with hen-size compartments lined with straw or wood chips, is essential. Mr. Filer said that if he were buying one now, it would be a mobile coop on wheels. "They're self-contained, and they fertilize as they go."

Food and water are also essential, with a heater for the latter during cold seasons. Both Mr. Filer and Ms. Seelbach supplement their hens' diet of food scraps, insects, ticks, and weeds with grain-based pellets.

One concern, however, is predation, from either hawks or raccoons, something Ms. Seelbach knows from hard experience, having lost two hens to hawks. "We have a lot of open space, so they like to go for the bunnies," she said of hawks. Once the winged carnivores have discovered chickens, "they come back." A coop and enclosure covered securely with steel chicken-wire should keep predators in check.

"We've been lucky," Mr. Filer said, "but we tend to let them out just before it gets dark. Chickens cannot see at night so when it's getting dark, they come right back to their house. They're not very smart, but they know they can't see."

The most impressive operation in town may be Iacono Farm on Long Lane in East Hampton, where some 3,000 chickens roam. Anthony Iacono, whose grandfather grew vegetables at the farm starting in 1929 and whose father started with poultry in 1948, said that 400 to 500 new hens are rotated into the flock each year. They are kept for two-and-a-half years, after which productivity declines and "they'll eat more than they're worth."

"And then what happens?" a visitor asked. "Chicken soup," was the reply. The farm is known for eggs and chickens alike, after all, not to mention chicken sausage, produce, homemade baked goods, and Mrs. Iacono's famous-recipe barbecue sauce.

"I would recommend that people start small," Mr. Filer said. "You can start with 6 or 12. It's probably just as much work to have 6 chickens as 15. You just need a place for their pen and access to water. It's great for kids, too. It's been kind of fun."