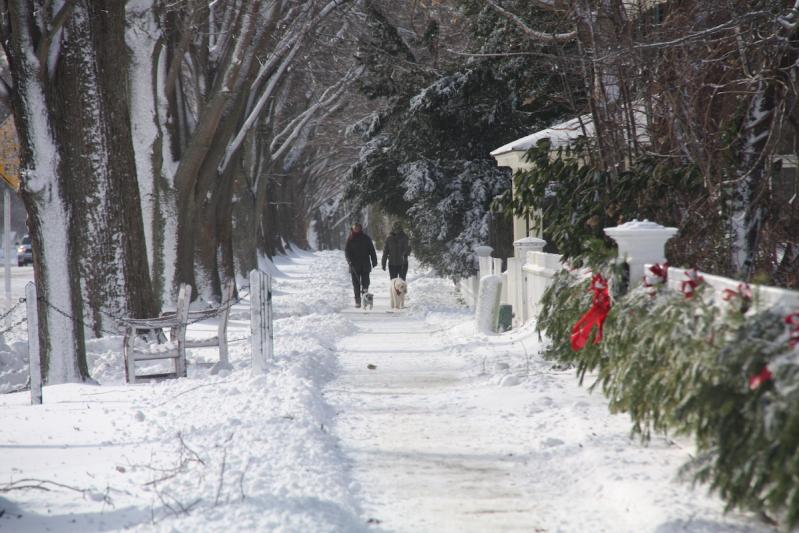 The basis for the percentage, Mr. Evans explained, has to do with the difference between weather and climatology. "Weather is what we have outside right now." Climatology, on the other hand, studies a region's  average weather over its last 10 to 20 years.

Another important difference: "A white Christmas doesn't mean there's snow on the ground at Christmas. It means that it's actually snowing on Christmas Day."

Even three feet of snow on the ground from Christmas Eve does not a hard-and-fast White Christmas make. The snow on the day, however, need only be so much as a light coating, the basis by which the National Weather Service deems any snow official. Wet sidewalk and snow collecting only on the grass? "That counts," Mr. Evans said.

This fine distinction between snow on Christmas and snowing on Christmas may account for the multitude of answers we get when trying to  determine how many white Christmases there have been here. And, as Mr. Evans noted, records for East Hampton are not easy to find. Most weather records pertain to New York City, Bridgeport, Conn., La Guardia Airport
— wherever there are reporting stations.

Where East Hampton lacked such stations, however, it had diarists. The diary of James Madison Huntting, a merchant and private banker who lived on Main Street, tells us that on Dec. 25, 1845, "snow fell yesterday and last night. Three inches deep, fair sleighing today. This afternoon cloudy and a heavy mist, snow disappearing."

It would seem that year came just shy of a White Christmas, but on Dec. 26, Mr. Huntting writes, "Last night we had more snow fall, good sledding today. The sleighs are plenty along street today." So 1845 checked the boxes for a white Christmas after all.
Earlier that year, on Feb. 10, Mr. Huntting "went to Sag Harbor in sleigh," a trip he judged to be "excellent." We can safely assume that snow looked the same in the 19th century, and that traffic did not.

The National Weather Service has East Hampton's last White Christmas down as 2002, two inches. "We're due," Mr. Evans said, especially considering AccuWeather's calculation that since 1912, there has been at least one inch of snow locally on Christmas Day 18 times, or once every six years.

National Weather tells a different story: Since 1883, it says, it has snowed only six times on Christmas Day on Long Island and in New York City. There has, of course, been snow on the ground on Christmas many more times than that, but, playing by the rules, that doesn't cut it.

"Your opportunities for snow are about 120 days. Only one of those 120 you've got for snow, you've got a shot at. So if you're a gambler, you're gonna bet the under, right?" Indeed, surprises are part of the deal, so even a seasoned weatherman like Mr. Evans has had his fair share of snow dumped over him, live on air, to the delight of Charlie Gibson and Joan London, and, of course, he has taken TV trays out of the commissary at ABC to sled down Central Park hills.

The Farmers' Almanac has predicted a particularly snowy winter for 2020 heading into 2021. "Remember last year's almost snow-free winter in the Northeast?" the Almanac writes. "Well, this year our prediction is very different, with the possibility of a blizzard hitting the Mid-Atlantic and Northeast states during the second week of February. This storm may bring up to 1-2 feet of snow to cities from Washington, D.C., to Boston, Massachusetts!"

So, a white Valentine's Day, then.

Richard G. Hendrickson, a longtime U.S. Cooperative Weather Observer in Bridgehampton, noted in a Jan. 12, 1961, issue of The East Hampton Star that the year-end weather report for 1960 had been record-breaking. By the end of December, he wrote, "13.7 inches of snow had fallen, more snow than in any December since 1945."

Mr. Evans explained why snow does not happen that often on the East End. "We're so close to waterā" he said, and the Long Island Sound, warmer bays, and the Atlantic make for more rain than snow.

An example can be found in a Dec. 18, 1958, issue of The Star, accompanied with photos by Frances Leddy and William Boone, under the heading "Snow and East Hampton."

"Our climate, warmed by the Atlantic, will not permit the wintering blanket which New England bears. We are spared the old, dirty snow of spring. And, too, we appreciate the moderation. Snows, like guests and fish, begin to wear, about the third day."
Another observation in the same 1958 article might be about to change because of Covid: "Many of our summer residents all have travelled miles to New England ski resorts. They will never realize that they could have enjoyed the snow from the same vantage point, by the fire with a hot buttered rum, just as well in East Hampton. But they should not be told, for selfish reasons. East Hampton in the snow is a pleasure reserved for the year-rounders."

What other secrets did the year-rounders of the 1950s keep to themselves? Hugh King, director of Home, Sweet Home, remembers snowfall on the potato fields, now part of the South Fork golf club on Old Stone Highway in Amagansett. Mr. King, with Gosman, Bistrian, Nielsen, Rodriguez, Loper, and Kelsey children, among others, got out their Flexible Flyer sleds, and, wearing mackinaws and flap hats, trudged up Quail Hill to ride back down. There was a big hole in the middle for a water pump, Mr. King recalled, where "our sleds would jump up in the air and we would go all the way down to the bottom of the hole. Yeah. It was scary and fun at the same time."

Mashashimuet Park's History and Future
A Conference for Young People to Create Solutions
Get Outside, Get Moving
END_OF_DOCUMENT_TOKEN_TO_BE_REPLACED