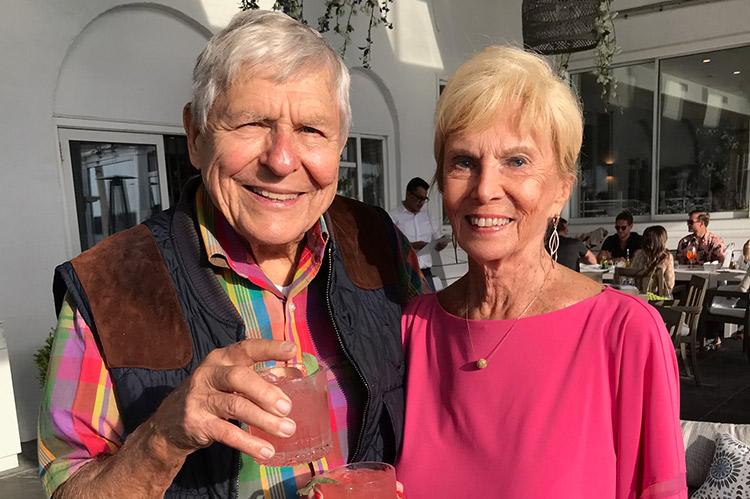 Love has no age limit. Neither does Match.com, which is how Robert Marshall, 93, and Anne Marshall, 88, found each other.

After a three-year engagement, the Marshalls were married on June 11 at EHP Resort, surrounded by family members and friends, in a ceremony conducted by Loretta K. Davis, who is also the executive director of the Retreat in East Hampton.

When they connected online, “Somehow I could see so much in her photo — her personality — and she certainly is a gorgeous lady,” Mr. Marshall said. Their first date was at the Bernards Inn in Bernardsville, N.J., near where the bride was previously living, and they said they both felt it was love at first sight.

Ms. Marshall said she finds herself intrigued by her new husband’s jazz piano playing, never comprehending how it is that he is able to improvise. And Mr. Marshall discovered his wife has a lovely singing voice and a great sense of rhythm. They share a passion for cooking and gardening and have a similar sense of humor “sometimes bordering on the bawdy.” Together, they said, they “enjoy being restless, creative, and sometimes downright lazy.”

From their previous unions, the new couple already had a combined 132 years of marriage in their past.

The blushing bride wore pink and was attended by her daughter, Myla Pridgen, an interior designer, as matron of honor. Her son, Kjell Purnell, a financial consultant, walked her down the aisle. Mr. Marshall’s two daughters, Dr. Gabrielle Salomon and Annette Franey, along with Dana Nickel, were the bridesmaids. The best man was Jack Murphy, a science student at the University of Boulder, and the groomsmen were Jacques Franey, proprietor of the Domaine Franey Wines and Spirits store in East Hampton, and Dr. Amir Salomon, a retired neuroradiologist.

Mr. Marshall holds a master’s degree in education from the City College of New York and a doctorate in clinical psychology from the State University at Buffalo. He was a psychologist in the Army during the armed conflict in Korea and was chief clinical psychologist at the V.A. hospital in Montrose, N.Y. The author of two books and more than 40 articles, Mr. Marshall serves on the faculty of the Center for Modern Psychoanalysts and maintains a private practice.

Ms. Marshall, who was born in Utah and can trace her family’s ancestry back to Brigham Young and Eli Whitney, has a bachelor’s degree from the University of Oregon, where she was a member of the Kappa Kappa Gamma sorority. In Arcadia, Calif., she started her first interior design firm, which she later re-established on the East Coast as Anne Cooper Interiors, serving clients with multimillion-dollar estates.

The Marshalls took an early honeymoon in 2020, stepping off a cruise ship just as the Covid-19 pandemic was setting in.

The couple have decided to settle in East Hampton while maintaining a residence in New York City, and have plans to winter in Florida and take frequent cruises.