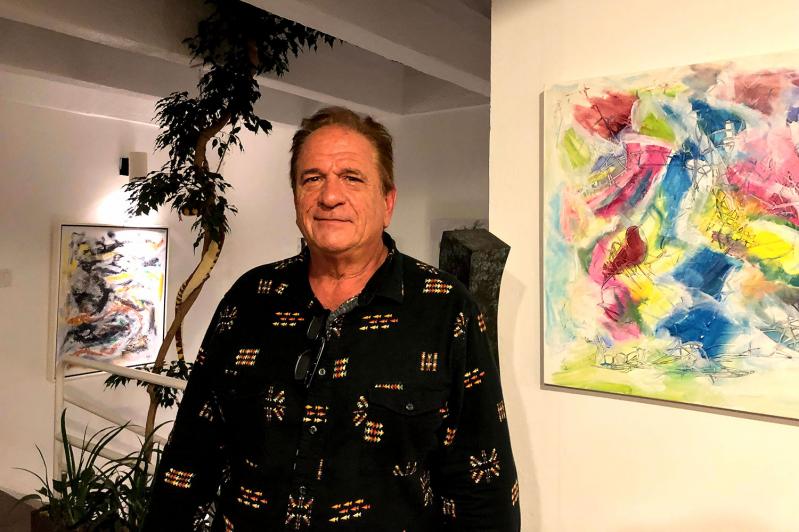 Used to treat opioid addition, among other things, the psychedelic ibogaine is "so powerful, and the relief so palpable, that people think they're cured," said Spiro Alexio, a psychotherapist. "But it's just a tool."
Zoe Lubetkin
By Zoe Lubetkin

"It was natural that it came my way, because it's about as far out of the box as you can get," said the psychotherapist Spero Alexio during his presentation on psychedelic ibogaine last Thursday. "It's outside of the house the box is in."

Mr. Alexio's Ibogaine Tour kicked off last week in Sag Harbor, the first stop of an event postponed for a year because of the pandemic. At the home of the artist Kimberly Goff, speaking to an audience of 10 or so, Mr. Alexio lectured on the applications of ibogaine to treat opioid addiction. Helen A. Harrison, the director of the Pollock-Krasner House and Study Center in Springs, joined him to supplement the talk with an anecdote about Pollock's use of nontraditional therapy.

Ibogaine is a psychedelic derived from the iboga tree, a rain forest shrub native to West Africa. It has been used for centuries in tribal civilizations' medicine and ritual; Western medicine adopted it in the 20th century. The drug works most effectively on heroin, addressing it in as little as one treatment. American heroin, however, is more and more often laced with its synthetic counterpart fentanyl. Fentanyl addiction requires two treatments: one to transfer the patient to a real opioid from the synthetic, and another which, if it succeeds, puts an end to the addiction.

Ibogaine's psychedelic nature allows patients to confront the trauma and circumstances which lead them to become opioid users. The trip lasts between 24 and 36 hours. "It's clinical and supernatural at the same time," Mr. Alexio said. The dose metabolizes in four to five days, and its metabolite noribogaine remains in the system around two months, repairing neurotransmitters.

Mr. Alexio was careful to reiterate that it is not a magic cure, but a procedure to be taken seriously. "It's so powerful, and the relief so palpable, that people think they're cured," he said. "But it's just a tool." If the circumstances which lead patients to use opiates do not change after treatment, they can and will relapse, he said. After-care therapy to address and attempt to change those circumstances is crucial. Ibogaine is classified as a Schedule 1 drug in America, so Mr. Alexio's patients must leave the country — often venturing to Mexico, but it's also available in countries like Canada — to have the procedure at established treatment centers abroad. These trips can be as short as a week, costing around $7,000, or last up to two months, which will run much more. Patients return to the States and complete after-care with Mr. Alexio, who is based in Las Vegas but treats patients virtually, nationwide.

His patients undergo a personalized therapy experience to determine if ibogaine is right for them. "This is not the kind of thing to be trifled with," he said, as, because of the psychedelic's intense confrontative properties, "the ibogaine will know." To address this, psychotherapists analyze the "set and setting" of a patient to make sure their mind-set and treatment conditions are optimized to be conducive to the drug.

Mr. Alexio was initially skeptical of the treatment. But his practice has an untraditional history: "For many years, I was the therapist you went to when all else failed," he said.

This skepticism has morphed into respect and a desire to spread the word about the drug on his tour this year, speaking about ibogaine not as a miracle treatment but as a complex process that can have enormous potential to treat addiction. "[Ibogaine treatments are] facilitators, they open doors of perception, but if you look at them as a cure, you're missing the point," he said.

The next stop on the Ibogaine Tour will be East End Naturals in Wainscott, where Mr. Alexio will speak at 7 p.m. next Thursday. Seating is limited and can be reserved by calling him at 702-204-9472. More information is at theibogainetour.com.