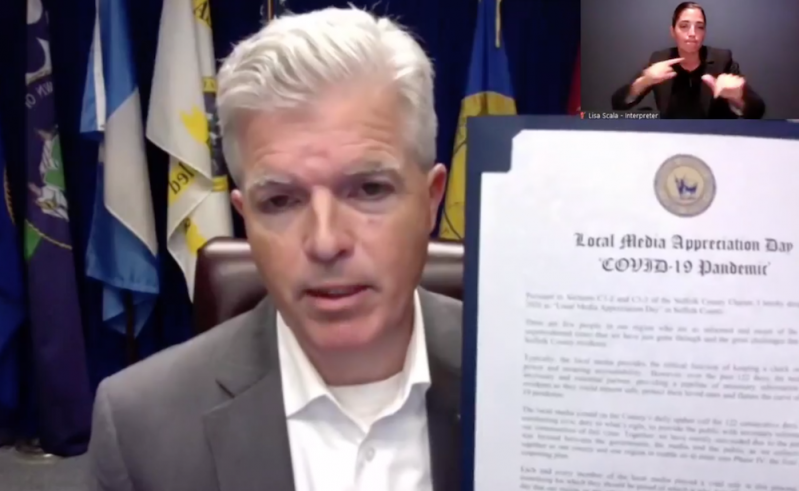 Wednesday was a momentous day in Long Island’s long journey through the coronavirus pandemic. On the same day that Suffolk County Executive Steve Bellone held his 122nd and final daily press briefing, no deaths from Covid-19 infection were recorded in the previous 24 hours and the Long Island region entered the last of a four-phase reopening plan.

The news was not all good, however: The county also reported a more than 50-percent increase in positive Covid-19 tests over the previous day, with 69 new infections reported.

The 69 new infections in the latest 24-hour reporting period represented an increase from 45 on Tuesday and 43 on Monday, but “we don’t put a lot of credence into any one day,” Mr. Bellone said. The new cases were among 4,108 tested, an infection rate of 1.7 percent, also higher than recent statistics, which have hovered around 1 percent.

Countywide hospitalizations for Covid-19 infection fell, by 7, to 50, which Mr. Bellone called “an amazing number, considering where we’ve been.” Just nine Covid-19 patients are in an intensive care unit, a decrease of one from Tuesday. “It’s amazing to see that number in single digits,” he said. The total number of deaths in the county was also adjusted downward, by one, to 1,984.

With Long Island reaching phase four of reopening, lower-risk activities not previously allowed can now resume. These include certain indoor and outdoor arts and entertainment, media production, and professional sports, albeit without fans in attendance. Gatherings are limited to 50, up from 25 in phase three. Houses of worship may be filled to 33 percent of their capacity.

The Long Island Aquarium in Riverhead, the Long Island Maritime Museum in West Sayville, and the Long Island Game Farm, Wildlife Park, and Children’s Zoo in Manorville all opened to the public on Wednesday, all following guidelines and protocols for staff and visitors.

Mr. Bellone spoke at length about businesses that remain shuttered, including movie theaters, bowling alleys, catering halls, and fitness centers. “Some have closed for good,” he said of gyms. Consultations about how to reopen these businesses safely, taking a phased approach and with reduced capacity, are underway, he said. “Over all, what we’ve heard is they want to be part of the solution to reopening. Many have spent months developing their own health and safety plans” that “incorporate best practices that put the health and safety of their employees and customers first.”

“This isn’t a sprint, it’s a marathon,” said Mr. Bellone, a long-distance runner himself. “You have to get started, though. We need to redouble our efforts to work with these struggling businesses to get them to reopen in another, safe way.”

Mr. Bellone touched on plans to reopen schools in September, which he said are in development. “I think schools need to reopen, but obviously that needs to be done safely,” he said, referring to the Trump administration’s current push to see schools reopen nationwide, beginning next month. “Putting together those plans is no easy task, but it is critical,” he said. Reopening schools “should not be a divisive issue or a political issue in any way. . . . We certainly cannot have a whole generation of kids that are falling behind.”

With school district budgets facing significant cuts due to drastically reduced revenues during the pandemic, “it is critical that the federal government provides disaster assistance at the local level,” he said, “so that burden is not placed overwhelmingly on local taxpayers.” There will be significant added expense to reopen schools safely, he said.

County officials are also working on procurement of supplies in the event of a second wave of Covid-19 infection, he said, adding that contact tracing will also remain important.

Mr. Bellone recalled the first of his daily briefings on the county’s response to the emerging pandemic, on March 8. The county’s first confirmed case of Covid-19 was announced the next day. “At that time, our economy was open and strong, sales tax revenue was up and strong,” and the county was on track for a second consecutive annual budget surplus.

Five days later, Deputy County Executive Peter Scully became the first county employee to test positive for the coronavirus, forcing Mr. Bellone’s own 14-day quarantine. “The next day, we ordered the schools closed. We were in full crisis mode,” he said.

“Here we are four months later, July 8, and we’ve reached the final stage of reopening of our economy. We’ve been up the mountain and made it down the other side. In the process, we’ve seen terrible tragedy and acts of extraordinary heroism.”

There is still work to be done, Mr. Bellone said, referring to the businesses that remain closed. But “now that we’ve passed all the major data-driven hurdles to get to this final stage of reopening, after 122 days I will be ending my daily Covid-19 briefings.” Briefings will continue on an as-needed basis, and the county’s website will continue to offer essential information.

Toward the conclusion of his remarks, Mr. Bellone held up an executive order that he said he would sign after the briefing, proclaiming the day Local Media Appreciation Day in appreciation of the role the Long Island media have played in getting critical information to the public. It would “commemorate the partnership and historic work that has been done to contain this virus and save lives,” he said. “Our work is far from done, but we are entering a new stage of this unprecedented event, and I say thank you.”