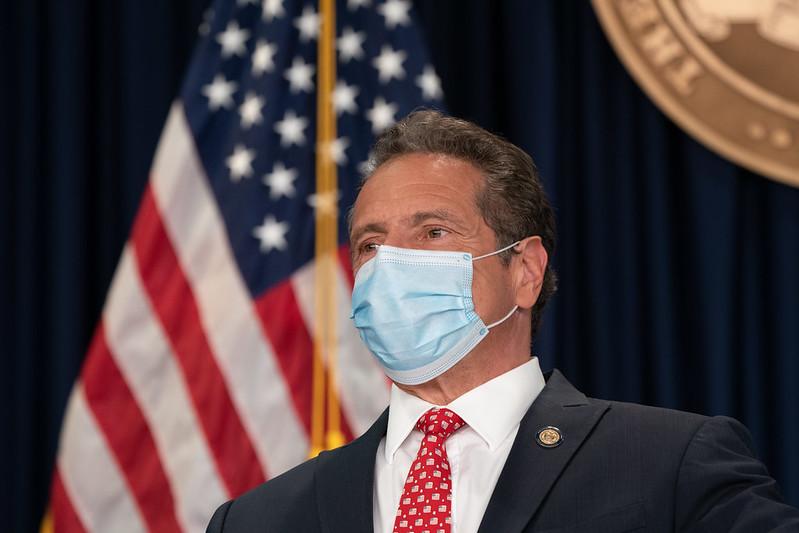 Gov. Andrew M. Cuomo donned a mask to underscore how important it is to wear one for protection against the coronavirus in crowded public places such as bars and restaurants.
By Carissa Katz

Gov. Andrew M. Cuomo announced on Thursday that he will sign an executive order allowing the State Liquor Authority to immediately suspend liquor licenses for bars or restaurants found to be violating the state's Covid-19 rules and regulations. A related executive order will make bars responsible for the sidewalk or "outside area immediately in front of their premises."

Numbers in Suffolk County continued their downward trend, too. Forty people tested positive in the 24-hour period ending Wednesday, an infection rate of .7 percent, according to County Executive Steve Bellone. Mr. Bellone said it seems people have largely been complying with state regulations, but that county officials are in communication with local enforcement agencies when complaints are received to the county hotline. "We get that information to them right away," he said. "My view is that we just reopened in phase two, there's a lot of cooped up people, a lot of energy that was stored up, that people wanted to get out. . . . Unless there's an egregious violation, we're informing, we're educating."

"We certainly don't want to be overly aggressive with businesses that are struggling to get back on their feet," he said. "At the same time, where you have examples of egregious violations, then it is important to have a mechanism in place to respond effectively to that."

Among the regulations in place for Suffolk restaurants in phase two is that outdoor dining groups of up to 10 people are allowed, but "you have to be serving food and you have to be seated," Mr. Bellone said. Masks are to be worn by patrons when they are not seated.

In phase three of the reopening of the economy, expected to begin on Wednesday, restaurants will be able to offer indoor seating at 50 percent of their usual capacity.

In other Suffolk numbers from the 24-hour period ending Wednesday, there were 125 people hospitalized and 35 in intensive care units, and 15 were discharged to continue recovering at home. Three people died of the virus in the last 24 hours. Sixty-six percent of the county's 3,046 regular hospital beds and 62 percent of its 576 I.C.U. beds were occupied.

While the governor announced that he will stop his daily Covid-19 live briefings after Friday, the county executive said he has no plans to suspend his daily press briefings, which can be viewed on Facebook Live. Until the economy is fully reopened here, the county is still in "the crisis period for this event," he said, and it is important to communicate on the local level and get critical information to individuals and businesses.