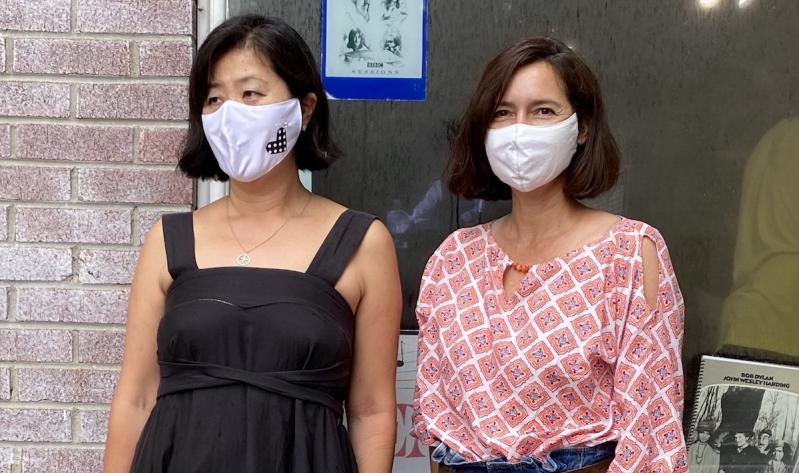 In March, with shortages of personal protective equipment looming, people who could sew quickly stepped up to do their part, even while working in isolation from each other.

Undaunted by isolation and a lack of supplies, Anne Kothari and Yuka Silvera spearheaded one such effort, working with friends to make masks and caps for hospital workers last winter and spring. In their case, the limitations gave rise to a network.

When a friend called this winter to say, "Dr. Fauci said it's time to make masks," Ms. Silvera, an East Hampton resident and costume designer, looked at the fabric in her studio and, following a mask pattern available online, "I immediately made about 60 masks."

Ms. Silvera posted on social media about her effort to make personal protective equipment, and Ms. Kothari was quick to offer help, even though the sewing machine she had ordered would take weeks to arrive. Ms. Silvera lent her a portable machine and a pair of fabric scissors.

Ms. Kothari, a former model and actress who now designs clothing, took to the work with ease and started making some masks using double layer T-shirts to start.

"I don’t know how many times I drove to Anne's house, or she drove to my house and we didn’t see each other and just left supplies in the mailbox or by the front door in a bag," said Ms. Silvera.

Lauren Richard-Holt, a social worker at Stony Brook Southampton Hospital, had told Ms. Silvera that the hospital was "in dire need of surgical caps."

Ms. Kothari found a surgical cap pattern online and the friends started turning out caps, too.

"At some point, we realized the Sag Harbor variety store was open, and Anne bought some cotton, but we mostly used old sheets that our friends donated," Ms. Silvera said.

Ms. Kothari said she got addicted to sewing, sometimes spending five to six hours a day working on the masks and caps at home in Amagansett. Other volunteers would make anywhere from five to 10 to 20 masks per batch.

It was enough to lose count, but about 300 masks and 400 caps went to Stony Brook Southampton Hospital and Stony Brook University Hospital, as well as SUNY Downstate Medical Center and Woodhull Medical and Mental Health Center, both in Brooklyn. The group also donated lunch money for 30 anesthesia intensive care unit workers at SUNY Downstate, which they chose after reading a New York Times article about how the hospital was not receiving as much money as other hospitals.

The group's acts of kindness were local, too: 30 masks for East Hampton Town Hall, and masks to postal workers, employees of the East Hampton I.G.A., Stop and Shop, and workers at the Montauk transfer station.