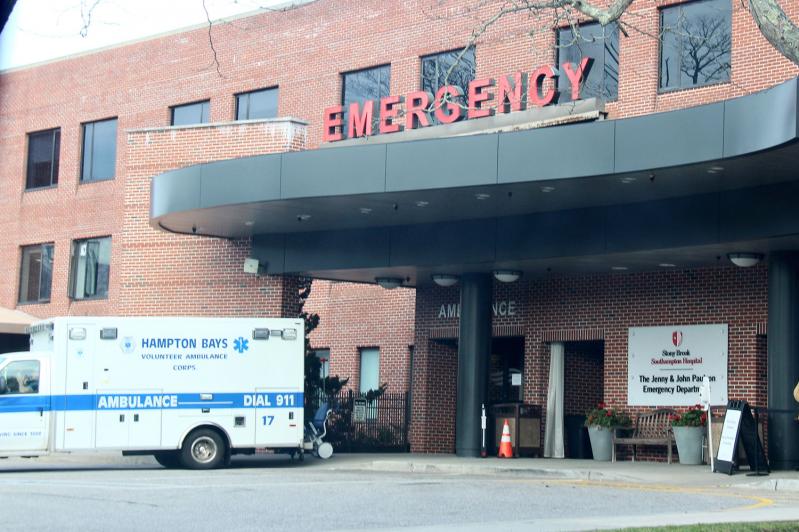 Stony Brook Southampton Hospital has 94 staffed beds and is "completely prepared to double our bed count when and as needed," a hospital spokesperson said.
Durell Godfrey
By Christine Sampson

"If hospitals become overwhelmed, more people die," Dr. Fredric Weinbaum, the chief medical officer at Stony Brook Southampton Hospital, said in an interview Wednesday. "It's really important to be able to take care of every individual in a very attentive way. Each person does represent unique challenges and if you're overwhelmed with too many cases all at once, then it's going to be a lot more difficult."

That's the reality of Covid-19 -- and the reason behind the heavier focus on hospital capacity put forth by Gov. Andrew M. Cuomo this week, Dr. Weinbaum said -- but there's good news for our local hospital: Fighting the surge in the spring this year has fortified Stony Brook Southampton for the second wave that's expected to come in the next few weeks.

"We are well prepared as a hospital," Dr. Weinbaum said. "We're always staying ahead in terms of our supplies of personal protective equipment, beds, and available staffing so that we can take care of any eventuality that occurs. The type of surge that we saw initially came to us very quickly without saying, 'Okay, take the next two months and prepare.' Now we're prepared. We've had the experience. We've been through it."

A hospital spokesperson said this week that Stony Brook Southampton has 94 staffed beds and is "completely prepared to double our bed count when and as needed." Governor Cuomo has mandated hospitals "surge and flex" by increasing capacity to at least 25 percent more beds. He has also instructed hospitals to balance patient populations among and between themselves to avoid any one facility's becoming overwhelmed.

Governor Cuomo on Monday added hospital capacity to the metrics that can put a region into a tougher state of lockdown. If a region's hospitals reach 90-percent capacity, it will automatically trigger a shutdown.

To overwhelm the hospital system "means people die on a gurney in the hallway," Governor Cuomo said. Earlier in his remarks, he compared the field hospitals the state had set up in the spring to that which one might expect to see in military combat situations, and said there was the potential to need such facilities again if the virus is not brought under control soon.

Whether or not a region can have indoor dining is now tied to hospital capacity: Indoor dining will be reduced from 50 percent to 25 percent or even zero if a region's hospitalization rate spikes and does not level out within five days.

Hospitalization rates could impact indoor dining and not gyms or personal care businesses because the evidence shows that the latter two are not where Covid-19 is spreading. Rather, Governor Cuomo said, it's "living-room spread" -- small gatherings among family members and friends, particularly where travel is involved -- that now account for more than 70 percent of new Covid-19 cases.

Governor Cuomo is also asking hospitals to recruit retired doctors and nurses to step back into the field to help existing health care workers. The state expects to have about 20,000 more professionals re-enter the field this way.

Dr. Weinbaum said Stony Brook Southampton hasn't had to rely on those retired medical professionals just yet. "We have a significant cadre of physicians in our outpatient offices who have demonstrated willingness to come into the hospital and meet additional physician needs," he said.

On Wednesday, there were about 4,993 people with Covid-19 in hospitals across the state. On Long Island, Governor Cuomo said on Tuesday night that only about 18 percent of hospital beds remained available, the lowest percentage of any region in the state.

Stony Brook Southampton had 17 patients with Covid-19 as of Tuesday afternoon, including three who are in intensive care units. Dr. Weinbaum said Wednesday that the hospital has had a Covid-19 survival rate higher than 90 percent since the start of the pandemic. Of the most severe cases, he said, at least 70 percent are able to survive. "Even the majority of the sickest of the sick are able to pull through," he said.

Dr. Anthony Fauci, the director of the National Institute of Allergy and Infectious Diseases, joined Governor Cuomo remotely for a press conference on Monday.

Dr. Fauci called the governor's strategies a "really sound" plan, and noted that the state has "a lot of backup contingencies, which I like. You're not going to get caught shorthanded on this."

Asked by the governor when he expects the worst of the holiday-induced transmission of Covid-19 will be, Dr. Fauci said he believes it will peak in mid-January. "Without substantial mitigation, the middle of January can be a really dark time for us," he said.

Governor Cuomo also asked Dr. Fauci to address the Covid-19 vaccines that are on the horizon. Recent surveys have shown, he said, that nearly half the population isn't yet willing to take the vaccine.

"When you have 75, 80 percent vaccinated . . . you have an umbrella of protection over the community," Dr. Fauci said. "The level of community spread will be very, very low. The virus will not have any place to go. . . . If 50 percent of the people get vaccinated, then we don't have that umbrella of immunity over us."

Front-line essential health workers and residents of nursing homes and long-term care facilities would likely be first in line to get the vaccine. And average people with no underlying health issues that might move them closer to the front of the line would likely be able to be vaccinated near the beginning of April, Dr. Fauci said.

The pharmaceutical company Pfizer expects to have emergency approval for its Covid-19 vaccine Thursday, and Governor Cuomo said that as soon as that happens he expects to convene a statewide panel for its approval for use in New York. New York State is anticipating an initial allocation of 170,000 doses.

The 90 locations across the state that can provide cold storage for the vaccines will receive enough doses for roughly 90,000 patient-facing hospital staff, or 40 percent of total hospital patient-facing staff, the governor said Wednesday. If all goes well, by the end of week two, "all high-risk staff will receive vaccination," he said. They would be followed by emergency medical service providers, other health care workers, and then essential workers. The state has opted into a federal program whereby pharmacies will handle vaccinations in nursing homes, the governor said.

At Stony Brook Southampton, the prospect of the vaccines gives Dr. Weinbaum hope. "It's really thrilling to think about a vaccine that's highly effective," he said. "As soon as a vaccine is available, immunization will start, though it will be months before the general population is seeing a lot of the vaccine out there."

According to the state, 6.24 percent of the Covid-19 test results reported Tuesday in Suffolk County -- 972 people -- were positive.

"If we don't change our behaviors quickly our hospital system will be at risk of being overwhelmed and we will lose more lives," Suffolk County Executive Steve Bellone said in a statement on Tuesday. He urged people to avoid small indoor gatherings.