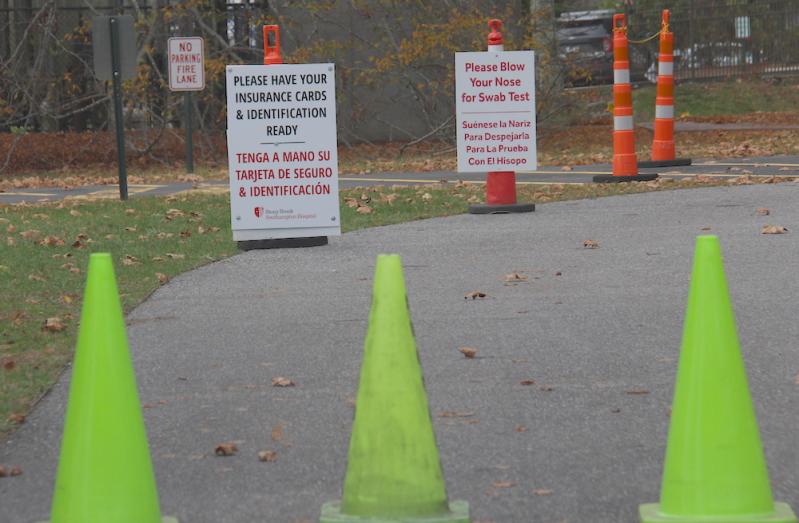 Parts of Nassau County as well as Upper Manhattan are also at risk, Governor Cuomo said Sunday. A yellow zone is instituted when the seven-day average of the daily positive test rate (outside of New York City, which is 2.5 percent because of its high population density) exceeds 3.4 percent for 10 days. Long Island's percentage of positive cases was 3.5 percent on Saturday and 3.23 percent for the week. According to the state, Suffolk County's number of positive cases was 532 on Saturday, a positivity rate of 3.79 percent.

Among Suffolk communities most likely at risk are Riverhead and Hampton Bays, County Executive Steve Bellone said in a press conference on Friday. That day, Mr. Bellone said the daily positive test rate was 6.5 percent in Hampton Bays and 5.6 percent in Riverhead. Rapid-result test sites have been set up in those two communities within the last four days.

In a yellow zone, according to the governor, mass gatherings, both indoors and outdoors, would be limited to 25 people and houses of worship are limited to 50 percent capacity. There would be a four-person limit at tables in both indoor and outdoor dining. Schools would remain open as long as 20 percent of students and staff members are tested at random. To exit a yellow zone, a geographic area must show a decline in the seven-day average positive test rate for 10 days and must have an overall seven-day average positive test rate below 1.5 percent for at least three consecutive days at the end of that same 10-day period.

“Context is important. What people should be asking now is what is my community’s infection rate? Not what is the state rate, because it’s different across the state,” Governor Cuomo said.

He said the upcoming holiday season between Thanksgiving and New Year’s Eve will be “a dangerous period.” It is critical that people keep Covid-19 under control through their actions, he said. Because of viral incubation periods, Governor Cuomo said he expects to see the fallout from Thanksgiving sometime between Dec. 2 and 10. The outcome of continued social activity through New Year’s Eve will come to light between Jan. 2 and Jan. 15, the governor said.

Because of “the social behavior of the season” it will be difficult to predict exactly how many people are likely to come down with Covid-19, Governor Cuomo said.

Still, he said, “it’s amazing how good a job New Yorkers are doing at keeping the rate down.” New York has the fourth-lowest Covid-19 infection rate in the United States; only Vermont, Maine, and Hawaii are lower.

In Suffolk County on Friday, the most recent day for which state data were available, the positive test rate was 2.7 percent with a seven-day rolling average of 3.1 percent. State data showed that Suffolk’s daily rate has been above 3 percent for the seven days leading up to Friday.