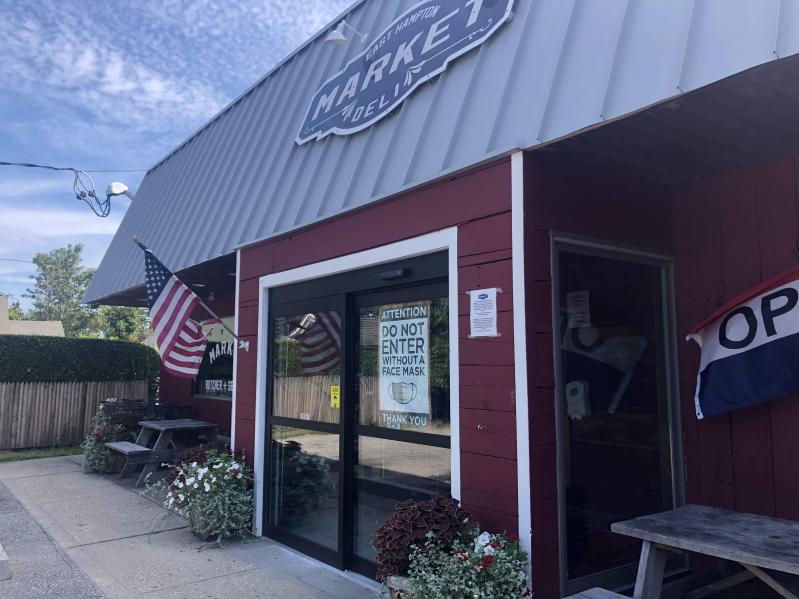 Many places around town have signs requiring customers to wear masks.
Christine Sampson
By Jamie Bufalino

For the first time since July 13, more than 100 new cases of coronavirus infection were reported in a single day in Suffolk County last week, with 104 people testing positive on Thursday and 103 on Friday.

After dipping to 49 on Sunday, by Monday the number of new cases in the county was up to 89, and on Tuesday 109 new cases were reported, according to Gov. Andrew M. Cuomo's office.

According to the county, 8,609 tests were administered last Thursday, and 10,195 on Friday, resulting in a 1.2 percent and 1 percent positivity rate respectively. On Tuesday, 10,845 people were tested, and the positivity rate was 1 percent.

That is far lower than the 2 percent rate on July 13, when just 4,795 tests had been administered and 102 new cases confirmed. Still, the uptick in new cases coming when schools have reopened and colder temperatures are causing more people to spend more time indoors, where the risk of infection is greater, makes it necessary to keep safety precautions in place, said East Hampton Town Supervisor Peter Van Scoyoc on Tuesday. "We were considering holding hybrid town meetings where a limited number of citizens could attend in person, socially distanced with masks, [but] I was waiting until schools reopened to see if there would be an upswing in cases," he said. "At this point we will continue to operate as we have."

The town has also been stockpiling personal protective equipment and cleaning supplies in case of a possible virus resurgence, said Joanne Pilgrim, the executive assistant to Mr. Van Scoyoc.

"We've been told since early March, beware of the fall," Gov. Andrew M. Cuomo said at a press conference in New York City on Monday at which he announced a plan to address the clusters of infections that have occurred in Brooklyn, Queens, Rockland, Orange, and Broome Counties, as well as a section of Nassau County. "These clusters have to be attacked," he said, likening them to embers in the midst of dry grass. "It always starts in a cluster, and then the question is, can you stamp out the cluster before it spreads?"

The governor ordered New York City schools in nine hot spot ZIP codes and areas surrounding them to close as of Tuesday.

When the "hot spot" zones are excluded, the positivity rate in the state is 1.01 percent, which he called "unbelievably low," but, he added, "as we're going into the fall I believe it's going to be practically unsustainable."

To keep infection rates as low as possible, the governor said earlier this week, communities must closely monitor schools, strictly enforce the state mandate that requires people to wear masks in public when they are not able to maintain social distance, and deter mass gatherings. On Tuesday, he announced that the fines for sponsors of mass gatherings will be increased to $15,000.

"Mass gatherings are the superspreader events," he said, even those held outdoors. "I mean, look at the spread in the Rose Garden," he said, referring to the recent White House ceremony at which President Donald J. Trump announced his nominee for the Supreme Court. At least a dozen people who attended the Rose Garden event, including President Trump and the first lady, Melania Trump, later tested positive for the virus.

Much to the chagrin of many families, concern about large gatherings will also extend to Halloween celebrations later this month. Seeking to do its part to prevent the spread of the virus, East Hampton Village will not allow crowds to gather there on Halloween this year, Police Chief Michael Tracey announced at a village board meeting on Thursday. Traditionally, streets such as Cooper Lane are cordoned off from vehicle traffic that night to provide a safe space for trick-or- treaters and their families to make the rounds, and the elaborately decorated houses are a draw for families from well beyond the village.

"In previous years, we've had upwards of 1,000 people," Chief Tracey said, "but this year we're just not going to be able to do that in a safe manner." The Police Department has sent a letter to school districts advising parents and students to take part in more low-risk activities. On the advice of the Centers for Disease Control, "we must discourage the gathering of large groups of people to prevent the spread [of the virus]," the letter said.

Trick-or-treaters will still be allowed to visit houses in the area, Chief Tracey said at the board meeting, but police will be on patrol and urging them to quickly move on before the crowd size becomes potentially dangerous.