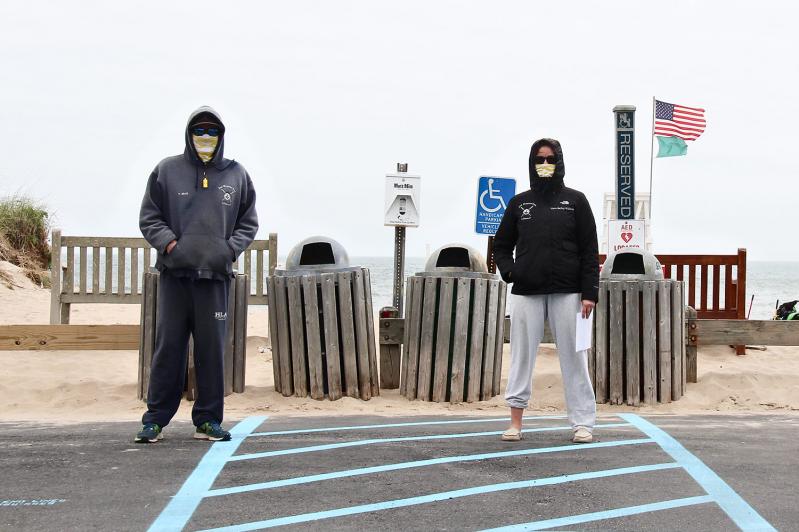 As East Hampton Town opened some ocean beaches for the first time on Saturday, Tom Mott and Kiara Bailey-Williams, lifeguards at Atlantic Avenue Beach in Amagansett, were ready for the crowds that mostly stayed away due to the less than optimal weather.
Durell Godfrey
By Christopher Walsh

With an assist from Mother Nature, the “slow, soft reopening” to the summer season envisioned by East Hampton Town Supervisor Peter Van Scoyoc last week largely unfolded according to plan over the Memorial Day weekend. A gray, damp Saturday discouraged many beachgoers, and windy conditions on Sunday and Monday brought fewer people to the ocean beaches than town officials, who had developed new safety protocols, had anticipated.

It was a most unusual start to the season, with the Covid-19 pandemic still a significant concern to government officials and public health professionals despite its apparent diminution on Long Island and the region's having met the metrics required for yesterday’s launch of the first of a four-phase reopening of commercial and recreational activity.

Mr. Van Scoyoc said on Tuesday that he had visited the town’s four ocean beaches that were open over the weekend. New signs and “a very large contingent” of enforcement personnel including police and traffic control officers, parks and recreation staff, marine patrol, code enforcement officers, and lifeguards were deployed there and in the hamlet’s commercial cores. “The weather was not too beachy, it was not conducive, for the most part” to a day at the shore, he said, and that “kept things fairly low key.”

“I’m pleased with the opening so far. It was nice to have an opportunity to get things up and running and worked out prior to what might be some really busy beaches if and when the weather gets to be nice.”

Kay Tyler, executive director of the Montauk Chamber of Commerce, agreed with the supervisor’s assessment. “It seems like everyone had a great weekend — ‘great’ meaning, no issues,” she said on Tuesday. “The town’s businesses were working together collectively and just really banding together to make sure things were working right and for the best. We all think that not having the greatest weather had a little to do with the crowds being a little bit controlled and subdued. But for the most part, in our book, a great weekend that could potentially have been a little chaotic.” The weekend “gave business owners a taste for what’s coming,” she said.

Based on her observations and reports from business owners, people complied with protocols such as social distancing and wearing a face covering in public, Ms. Tyler said. “We did have traffic, for sure. But we didn’t have the madness of people running around town that we anticipated.” Motel managers, she said, reported widespread compliance and respect for others, “and if someone did forget to wear a mask, they immediately went back to get it. It seems that all the out-of-towners either got the message that they need to be respectful or they’re just so used to it at this point. Hopefully, this will be an example of what the rest of the summer looks like.”

“There was more a flood of enforcement than users” at the beaches, Councilman David Lys said on Tuesday, and that contingent and the uneven weather worked in favor of continued social distancing and the wearing of face coverings in the town’s parking lots, restrooms, and in food vendor lines. Mr. Lys was to meet yesterday with the advisory group comprising multiple town departments that developed recommendations and protocols for a phased opening of beaches, parks, and other recreation areas. Results of those recommendations and protocols will guide any adjustments — “tweaking things for the larger crowds,” he said.

“No one was overwhelmed,” Mr. Lys said, “but we understand it’s going to get tougher from here on.”

Becky Molinaro Hansen, the East Hampton Village administrator, said on Tuesday that village beaches “had minimal patrons” over the weekend due to the weather. She quoted Jamie Tulp, the beach manager, who relayed that “over all, it was a quiet weekend but a great opportunity to clean, practice social distancing, and discuss the summer that awaits us.”

Sag Harbor Village Mayor Kathleen Mulcahy said that she was “very proud of Sag Harbor and relieved that the visitors who came out respected our community enough to wear masks and not stay around [on Main Street] any longer than they needed to.” Ms. Mulcahy had issued an executive order on Friday limiting parking on Main Street to 30 minutes, which she said was necessary to protect public health given the expected congestion resulting from an influx of visitors, seasonal renters, and second-home owners.

At Gosman’s Dock, at Montauk’s harbor, business at Gosman’s Clam Bar and a walk-up window at the Inlet Cafe was “about as good as you can expect under the circumstances,” said Chris Gosman, an owner and manager. Though its indoor and outdoor dining decks were closed, the complex’s expansive open spaces and the Clam Bar’s menu — “a little more conducive to takeout than a full-service restaurant where you’re paying $35 a plate,” he said — made for “a different kind of weekend, but it was all right.” The Inlet Cafe offers sushi, which, Mr. Gosman said, customers are accustomed to ordering for takeout.

“Even though the weather wasn’t great, people really wanted to be out and about,” he said. “Even if they were just standing up drinking a beer or sitting on the gazebo steps, they were still happy. Quite a few people ate on the premises, and didn’t take food to go home.”

But to Mr. Gosman and others for whom a business’s survival may depend on the 15 weeks between Memorial Day and Labor Day, a return to normalcy cannot come soon enough. “Certainly, everybody wants to get back to some sense of normalcy; we’re all tired of sheltering in place,” Mr. Van Scoyoc said. “We’re not going to rush, we’re definitely going to make sure we do this in a safe way.”