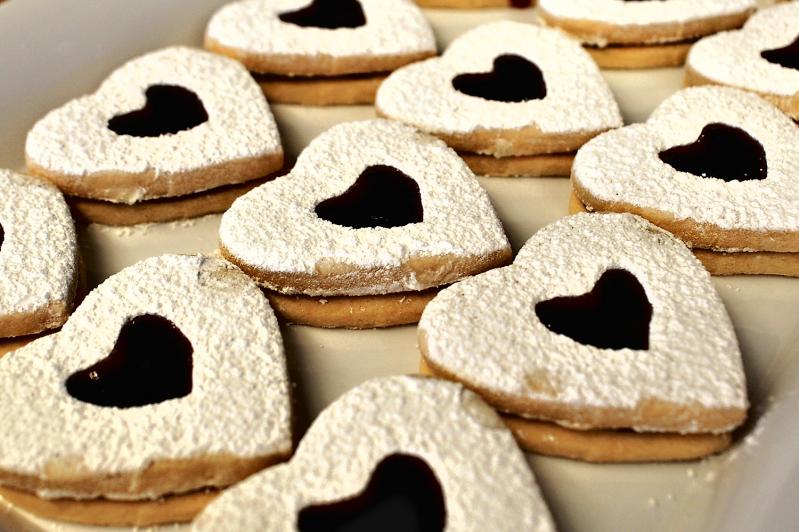 Several bakery owners say they are as busy now as they are in summer, and it's not just bread people are after, but also little endulgences like these cookies from Breadzilla in Wainscott.
Michael Hansen
By Bella Lewis

Man shall not live by bread alone. Alone in quarantine, however, man seems to live for bread, and East End bakeries are in overdrive working to satisfy that hunger.

“Bread is essential. Everyone wants bread,” said Keith Kouris, who owns Blue Duck Bakery in Southold with his wife, Nancy. “Right now we’re selling the amount of bread we would sell in the summertime when the tourists are out.”

Breadzilla in Wainscott reopened today with a completely redone retail layout and plexiglass walls between customers and employees. Meanwhile, around the corner Levain Bakery is selling twice as much bread as it usually does at this time of year.

This is the masked, gloved, socially-distanced state of affairs at a few of the East End bakeries during Covid-19 — proving that to their customers, they are essential businesses indeed.

At Goldberg’s Bagels, which has locations across the East End, once apocalyptic bagel orders — dozens and dozens of bagels for pickup — are now in rotation with individually prepared, takeout sandwich orders. But that wasn’t true a few weeks ago. The shops normally go through tons of rolls, too, but there was a two-week period when one shop didn’t have a single order for anything on a roll. Prepared food orders are now trickling back in, said Amanda Goldberg. “People are getting annoyed with cooking.” And what the shops have lost in foot traffic they are mostly making up for in phone orders.

When pandemic-related shutdowns forced restaurants to suspend in-house dining, 50 of Blue Duck’s accounts across the East End closed. Farm markets that remained open helped offset the loss of the restaurants’ business to some extent. “We were able to maintain our staff despite a reduction in hours,” Mr. Kouris said. He sees a good 15 to 25 customers from the South Fork drive to the Southold Blue Duck every week. And, not surprisingly, people are not only hungry for bread, but for “small pleasures in this time of stress. Maybe that means we’re overeating, but dessert is a way to make it seem not so bad,” he laughed.

Blue Duck is receiving an influx of orders for small, seven-to-eight-inch birthday cakes, sized just right for the immediate family.

Those small pleasures are also keeping Levain on its toes, and its bread is just as much in demand as the massive and decadent cookies the bakery is famous for. Usually bread is on the shelves for most of the day from a morning bake, but now the demand and the amount of bread per order requires an afternoon bake, too, said Grant Harris, Levain’s assistant general manager.

“Despite these challenging times, we’re heartened to see that our team members show up every single day with a ton of positivity and an unwavering dedication to each other, to our business and to our customers,” said Andy Taylor, Levain’s C.E.O. “We’re also seeing such great support from our local community and neighbors. We’re very grateful.” Levain has five locations in Manhattan, as well.

In Wainscott, “the main thing that we’re doing differently is we’re all wearing face masks, taking staff members’ temperatures before each shift, and washing our hands every 30 minutes, which we keep track of with a timer in the store,” Mr. Harris said. “Anytime that we’re using cash, we’re putting gloves on and washing our hands immediately afterward.” With four people at a time allowed in the store, Monday and Thursday are low-key, but Friday, Saturday, and Sunday get as busy as any summer’s day might, with a line of six or seven people out the door.

Breadzilla now has an upstairs fan that pulls air up and out, recirculating it to efficiently let out and replace the store’s atmosphere entirely, multiple times a day, explained Brad Thompson, who owns the bakery and takeout spot with Nancy Hollister. He wanted to reduce employees’ prolonged exposure to any air that could transmit the virus.

Ms. Hollister continued going into the shop during its closure to bake bread for food pantries. Breadzilla is a stalwart provider of leftovers to pantries, but less frequent pickup routines in response to Covid-19 have required her to bake more bread than usual in one go. She has been donating 75 to 80 loaves of bread a week during the nearly four weeks the store was closed for renovations.

“We’ve always had to have gloves,” Mr. Thompson said regarding shifting precautions for employees. “As far as the Health Department goes, Suffolk County’s is one of the strictest in the country.”

In response to the quarantine’s sudden rise in home bakers, Breadzilla will also be selling ingredients like chocolate chips, sourdough starter, unsalted butter, and yeast (the ever-elusive ingredient in shortage at grocery stores).

A self-described master bread baker since 1999, Mr. Kouris at Blue Duck advocates for home baking and its restorative properties when “everyone is in quarantine, by themselves going crazy, with their kids going crazy. Bread is therapeutic and so is baking in general. We sell our yeast and flour if people ask for it. We don’t have an issue getting it, so why not share it if we can.”

“We’re blessed to be able to stay open and have the support of customers,” Mr. Kouris said. “Our heart goes out to all the small business owners who have to go through this.”
--
Correction: The original version of this article misstated the number of the Levain Bakery's Manhattan locations. It has five Manhattan locations.

East Hampton Samples Are a Crucial Contributor to Lyme Test
Ready to Adopt a Pet? ARF Is Ready, Too
Guild Hall's Curator Visiting Studios Virtually Through June
Seeking Stories and Images From the Time of Covid
END_OF_DOCUMENT_TOKEN_TO_BE_REPLACED