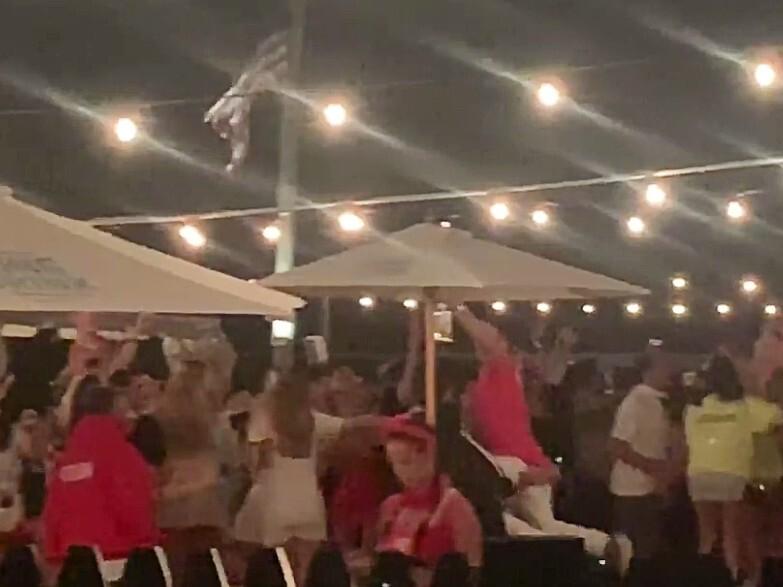 Rick's Crabby Cowboy on Saturday night, from a video shared on social media

The owners of two Montauk nightspots and the manager of another were arrested over the July Fourth weekend on low-level charges having to do with alcohol storage and signs — allegations that may lead to more serious consequences for Rick Gibbs of Rick's Crabby Cowboy, Vincenzo Lentini of Ruschmeyers, and Jeffrey Capri of Nick's on the Beach.

In a release issued Sunday afternoon, East Hampton Town officials said police had observed numerous violations of Covid-19 regulations at each of the bars. The town is expected to forward the reports to the New York State Liquor Authority, which has the power to revoke liquor licenses.

Videos and photographs taken of crowds at several other Montauk gathering places will also be sent to the Liquor Authority, the town said.

The enforcement initiative came as Suffolk County appeared ready to move ahead into phase four of reopening the economy. County Executive Steve Bellone in a weekend press call said he expected to take that step on Wednesday.

"It has been an incredible turnaround," he said. "The public is overwhelmingly abiding by the regulations."

That was not the case in Montauk on Saturday night. Videos shared on social media show young patrons without masks whooping it up on densely packed dance floors. A town detail –- a police sergeant, an officer, and a fire marshal -- visited businesses to check on compliance with state orders aimed at slowing the spread of the novel coronavirus. The rules limit restaurants to half-capacity, and mandate that alcohol be served along with food, and only to groups of guests seated at least six feet apart.

In a video reportedly taken at Rick's, on East Lake Drive, a crowd of men and women under a tent can be seen on their feet, dancing, and singing along to Neil Diamond's hit "Sweet Caroline," as others wait on a line outside to join them. One man, holding what appears to be a bottle of alcohol, is lifted into the air by another and bounced up and down in time with the music; neither is wearing a mask.

East Hampton Town Supervisor Peter Van Scoyoc says in the release that he will ask the Liquor Authority to suspend the licenses for restaurants that repeatedly ignore Covid-19 rules.

In an email to The Star on Sunday, East Hampton Town Police Chief Michael Sarlo said that Saturday in Montauk had been “extremely busy all day. Traffic was at a standstill. We were very proactive in visiting the restaurants throughout the afternoon, walking foot posts and working with the lifeguards and marine patrol on the beaches,” where, he said the lifeguards “were using 10-foot poles to encourage distancing.” Drones were used as well, to monitor the crowds.

Late in the day, said the chief, “we focused on restaurants. The dining set-ups, and most of the restaurants were in compliance with the orders, and approved by the fire marshal. It was busy, but it was pretty orderly.”

Police did receive complaints, as well as shared videos and social media, about “some after-hours activity violating the guidelines,” Chief Sarlo said. Enforcement teams “visited numerous locations and found a lot of compliance and good work being done by a lot of restaurants.”

The evening’s citations against Rick's Crabby Cowboy, Ruschmeyers, and Nick's on the Beach were for “routine [Alcoholic Beverage Commission] law violations,” he said.

Sunday morning, however, was a different story.

“The information we got back this morning obviously shows further violations at several locations, which we immediately forwarded on to the [State Liquor Authority],” Chief Sarlo wrote. “We anticipate more action from the state on those businesses. Obviously, we would rather have stopped the activity, and addressed the violations while they were occurring, but we just got too busy to make it back to all of the locations later in the evening. We are expending a lot of overtime, putting resources in play and working very hard at this.”

During that night, he noted, police were “completely swamped with calls for service, fireworks, residential noise, and everything else we are tasked with in summer. Over 100 calls overnight.”

Albany has not been receptive, the chief said, to his repeated requests to order restaurants to close early or at least to stop serving alcohol when their kitchens close, and also to disallow the alcohol-to-go option. "They don't seem to truly understand the volume of establishments, as well as the strain on our resources we experience serving the community during peak summer hours.”

County Executive Bellone, during his weekend press call, acknowledged that the three Montauk nightspots were not Saturday night’s only law enforcement headache. There were “serious injuries” in Port Jefferson, he said, from revelers lighting fireworks, and in Central Islip as well, where at least one person sustained hand injuries. And at the Rodeway Inn in Huntington Station, there was a suspicious fire; he thanked the county K-9 squad in that incident for already having someone in custody.

Mr. Bellone had some good news about Covid-19, noting that in five of the past seven days, there have been no deaths in the county from the virus. “We are moving into the new week in very good shape,” he said. He added that he is not concerned that Wednesday’s move into Phase 4 of the reopening would send the wrong message. “We are in the position we are in because people have followed the guidance," he said.