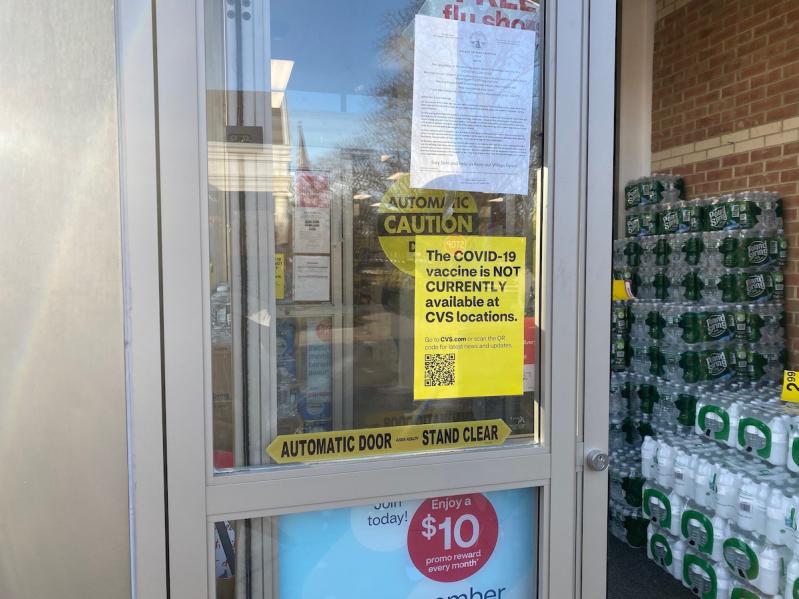 For those seeking to get a Covid-19 vaccine, the CVS on East Hampton's Pantigo Road posted the bad news on its front door.
Jamie Bufalino
By Jamie Bufalino

A lack of supply of Covid-19 vaccines continues to impede New York State's effort to inoculate the more than seven million residents now deemed eligible to receive them, Gov. Andrew M. Cuomo said at a press conference on Monday.

For East End residents hoping to book an appointment online for a vaccination at Stony Brook University, the nearest state-run site, the message has been a consistent: "No appointments available." On the websites of urgent care facilities in Riverhead and Huntington run by Northwell Health, which is overseeing vaccine administration on Long Island, the notice is even more explicit: "We currently do not have availability for vaccinations due to limited supply from New York State."

Governor Cuomo said Tuesday that 93 percent of the 1.3 million first doses of vaccine the state has received thus far from the federal government had been administered, but the weekly supply has decreased. The state received 250,000 doses for the second week in a row, he said, down from 300,000 in the first four weeks of distribution. The state allocates the doses in a set percentage, with 21 percent made available for health care workers, 27 percent for essential workers including police and other first responders, and 52 percent for people 65 and older, he said. There is a separate allocation for those in long-term care facilities.

Medical facilities on Long Island have received 229,520 doses as of Tuesday, according to the state, and 172,500 or 75 percent had been administered.

Designating the vaccines for different populations has also been a challenge, Mr. Cuomo said, because the state has no idea exactly how many doses it will receive. "Right now we go week to week, and I can't tell what we're going to get next week," he said.

On Tuesday, President Joseph R. Biden announced that an additional 1.4 million vaccine doses would be distributed to states starting next week. That increase will continue for three weeks, Governor Cuomo said later that day. Going forward, the federal government will provide a "reliable three-week forecast" on vaccine supply, according to President Biden. "So, we will both increase the supply in the short term by more than 15 percent and give our states and local partners more certainty about when the deliveries will arrive," he said.

Nevertheless, Mr. Biden said, "the brutal truth is: It's going to take months before we can get the majority of Americans vaccinated."

In a bit of good news, Governor Cuomo said the pace of vaccinating health care workers, who have been given first priority, has picked up, with 72 percent now vaccinated compared to 63 percent last week.

On Monday, Suffolk County reported 1,135 new Covid cases, an infection rate of 8.54 percent, and 808 hospitalizations, an increase of six from the day before. The seven-day average infection rate on Long Island is 6.9 percent, according to the state, the highest of any region in New York. The seven-day average was even higher in Suffolk, at 7.2 percent. The number of people hospitalized in the county has been above 800 on all but five days in January thus far.

There have been no superspreader events to blame for the elevated infection rate, said the governor, who attributed the increase to "personal behavior and awareness."

"We're having conversations with the large hospitals and the local elected officials because we want a targeted strategy for Long Island," he said. "I don't have a good single answer for why it's going up on Long Island, but give us a few days."

Celebrate Hanukkah All Across Town and at Home
Stuffed With Turkey? Walk It Off
Blood Drive Tuesday in Bridgehampton
END_OF_DOCUMENT_TOKEN_TO_BE_REPLACED