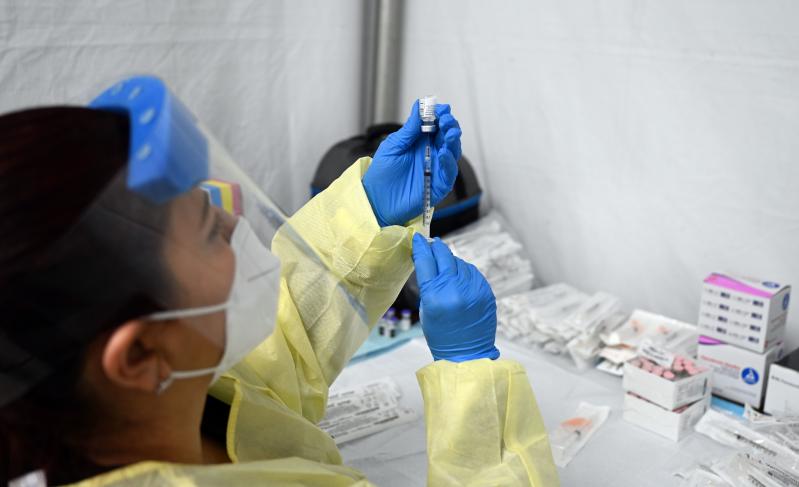 Yolanda Mendez, a pharmacist in Harlem, prepared doses of the Pfizer Covid-19 vaccine to be distributed in that community on Jan. 17.
Kevin P. Coughlin / Office of Gov. Andrew M. Cuomo
By Christopher Walsh

Gov. Andrew M. Cuomo wrote to the chief executive officer of Pfizer, a developer of one of the federally approved Covid-19 vaccinations, on Monday to ask if New York State could purchase dosages directly from the corporation.

The governor appealed to the New York City-based pharmaceutical giant amid ongoing frustration with the Trump administration, complaining on Monday that the federal government dramatically increased vaccine eligibility last week while distributing fewer doses to the state.

"I am requesting that the State of New York be permitted to directly purchase doses from you," the governor wrote to Dr. Albert Bourla. "The distribution of any doses obtained directly from Pfizer will follow the rigorous guidance the state has established, while enabling us to fill the dosage gap created this week by the outgoing federal administration."

"Shifting guidance from the Centers for Disease Control and Prevention drove the number of New Yorkers eligible and prioritized for the vaccine from five million to seven million practically overnight," the governor continued. "The federal administration essentially opened up a floodgate while cutting our supply — leading to confusion, frustration, and dashed hopes."

Also on Monday, the governor issued a letter to the federal Health and Human Services secretary, Alex Azar, demanding an explanation for the false†claim that all doses that had been held in physical reserve would be shipped†to states, when the federal government had already distributed those doses and would not be increasing the supply.

In remarks to the press on Monday, Mr. Cuomo complained that because federal guidelines increased eligibility to those 65 and older, "you now have seven million New Yorkers chasing 300,000 vaccines" distributed weekly. At that rate, it would take six months for those eligible to be vaccinated. Worse, he said, the quantity of doses has fallen to closer to 250,000 in recent weeks.

"Now," he said, "you're talking seven months to get seven million vaccinations done. Why did you raise that expectation?"

Vaccinations in the state have surpassed one million, the governor said, reaching almost 330,000 in the fifth week of administration versus 34,640 in the effort's first week. Those who received a first dose are starting to receive the required second dose. "The health care system has ramped up aggressively," he said.

But Long Island "has taken a relative jump, which is concerning, and we're watching that," he said. Long Island's seven-day-average positive infection rate is 7.84 percent, the highest in the state, and 1,649 are hospitalized with Covid-19 infection.

Rates of infection are declining across the state, however, and the rate of hospitalization is slowing, but more contagious mutations of the novel coronavirus could quickly reverse those trends, he said.

"Unvaccinated doctors and nurses are still a problem," the governor said. "Put together with a second wave, that should keep us up at night. . . . That's why they were prioritized nationwide in receiving the vaccine." Just 60.1 percent of hospital workers on Long Island have been vaccinated, he said.

The governor said that he would not attend Wednesday's inauguration of President-elect Joseph Biden and Vice President-elect Kamala Harris in Washington, as he had initially intended, because of "talk of doing demonstrations at state capitals. . . . We saw what happened in Washington a couple of weeks ago. We have made preparations here, we have state police making preparations, we have police officers on standby. I think that my place is to stay in New York State given this possible circumstance."

On the East End, elected officials of towns and villages wrote to the governor and Suffolk County Executive Steve Bellone on Thursday complaining about a lack of vaccination centers.

"The five East End towns have seen their population swell to summertime levels since the advent of the pandemic as residents have fled from urban areas to the safety of the more rural East End," according to the letter signed by East Hampton Town Supervisor Peter Van Scoyoc, Assemblyman Fred W. Thiele Jr., State Senator Anthony Palumbo, and other officials. "The vaccine distribution system on the East End, with the new, expanded eligibility categories, is virtually nonexistent."

They asked that the East End "get its fair share" when vaccine dosages become available and that the governor and the county executive "work with us now to establish a network of distribution sites" across the East End.