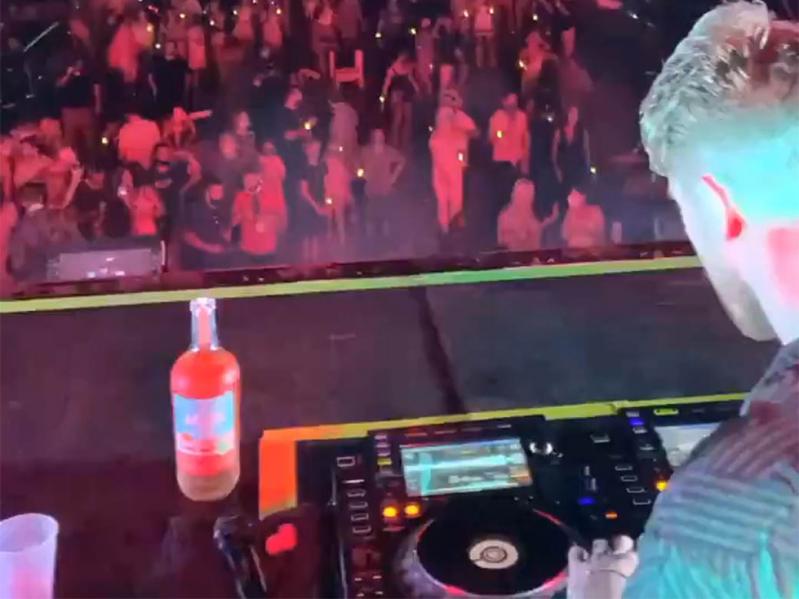 The Chainsmokers played a show on July 25 at Nova's Ark, attended by as many as 3,000 people.
Twitter
By Christopher Walsh Christine Sampson

The New York State Health Department has charged In the Know Experiences, the concert promoter involved in the Chainsmokers concert held in Water Mill in July, with violating public health law. Gov. Andrew M. Cuomo announced last week that the state will seek $20,000 in fines for holding a "nonessential gathering" and failing to enforce the wearing of face coverings.

"As I said immediately following reports of this event, it was an egregious violation of the critical public health measures we have had in place since the beginning of this pandemic to protect New Yorkers from Covid-19," Governor Cuomo said. "We will continue to hold people and businesses accountable for their actions, and the local governments must enforce the rules or else we will hold them accountable as well."

Charges against the company are also proceeding through Southampton Town Justice Court.

At a town board session last Thursday, Supervisor Jay Schneiderman suggested the town is now being treated differently by the state because of the concert.

"The governor is now asking for our special events that we issue, to be reviewed and approved by New York State," Mr. Schneiderman said. "We haven't received anything yet in writing . . . so we don't really have any details as to whether that will be every event or large events, or what led them to the conclusion that Southampton should be singled out like that. We believe that the entities that reviewed that permit reviewed them carefully for compliance with all the state guidance and that it met the standards, and the organizer unfortunately didn't follow the permit precisely."

"Thank God the Chainsmokers event, as controversial as it was, did not lead to any cases of Covid like the super-spreader events," Mr. Schneiderman added later. "That's not to say what happened was excusable. We're as upset as the state is with what happened. It's challenging, because we want to find ways for people to live their lives. We want to be entertained and raise money for charities and do it in a safe way."

Since the concert the town has issued three summonses to both In the Know Experiences and its owner, Seth Kaplan. Mr. Kaplan and his company have pleaded not guilty, represented in court by Edward Burke Jr. The defendants are due back in court tomorrow on two charges of violating public health law and one charge of failing to follow special-event notification rules.

"We anticipate the arraignment of an additional charge of a similar nature for each named defendant," Sean M. Cambridge, an assistant Southampton Town attorney, said by email this week.

In the meantime, with the heightened state scrutiny of public events, other gatherings in the town have been affected. The Bridgehampton Lions' annual pumpkin-carving contest is now a virtual contest, and John Eilertsen, Ph.D., executive director of the Bridgehampton Museum, said an outdoor concert series the museum was planning was axed last month, even though it would have adhered to the 50-person maximum-attendance guideline.

"We thought we'd do low-key and play to the street," Mr. Eilertsen said this week. "However, before we applied for any special-event permit in the town, they advised us that because of the New York State guidelines for Covid-19, the town was only approving car concerts. People have to stay in their cars. And we just didn't have the facilities for that."

Mr. Schneiderman said the town was working with a company that specializes in homeland security and public health and safety, to do "a top-to-bottom review" of the town's events-permitting process.

"They've been in constant communication with the state and the governor's office as well," James Burke, the town attorney, said at the work session. "All my feedback is that the governor's office and the state are pleased with what the town is doing . . . I think we're working together and they brought up some good points. There are some things that we can do probably better, which is a good thing."

In the Know Experiences held the Safe and Sound Concert Series featuring the Chainsmokers on July 25 at the Nova's Ark Project. Southampton Town issued a special-event permit for the concert after reviewing the promoter's application, which described multiple measures that would be taken to protect against transmission of the novel coronavirus. However, the promoter's application omitted reference to a designated "friends and family" section where concertgoers could freely congregate and where, according to the governor's statement, mask wearing was not enforced.

More than 2,150 people attended the event, according to a state investigation, exceeding the maximum allowable capacity per the permit. The governor also charged that the event was not held in accordance with other safety measures outlined in the application and promotional materials, thus creating conditions that increased the risk of spreading Covid-19.

"We have worked too hard throughout this pandemic to keep infection rates low utilizing proven public health measures, and we must ensure that they stay in place, Health Department Commissioner Howard Zucker said last week. "If they do not, enforcement is always an option. We will take whatever measures we can to protect the public health of all New Yorkers."

A spokesman for In the Know Experiences said that the company is aware of the state charges and has no comment at this time.