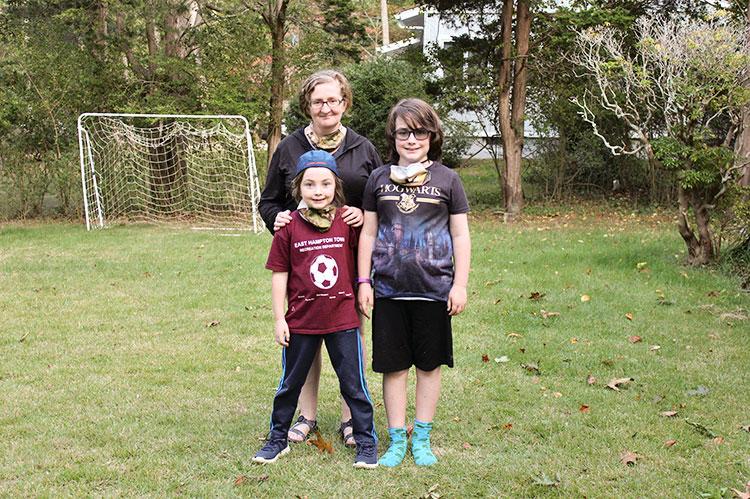 Saoirse and Adire Quinn, in front, with their mother, Margarette Doyle, recently shared their experiences at Springs School during Covid-19.
Bella Lewis
By Bella Lewis

Saoirse and Adrie Quinn are old enough to remember school before Covid-19 — before home was "school" on some days. Now Saoirse, a Springs School second grader, and Adrie, a fifth grader, are adjusting to a new normal, one that accounts for every moment of the on-site school day, but leaves them and their parents accountable for their remote learning at home.

On a recent Thursday afternoon, sitting on the grass to talk about school, both were as bright-eyed and bushy-tailed as a parent could hope for in any school year, let alone this one.

"I feel like it's a fun experience, all of us learning in the house," said Adrie.

The Quinn siblings are lucky to have a parent at home. Their mother, Margarette Doyle, helps to oversee the day's work.

"Some days, to be honest, it can be a challenge, but I am not working, so I can devote more time to teaching them," Ms. Doyle said. "Other parents who work from home do find it more of a challenge."

The basics in Springs: Everyone gets a Chromebook, which is new this year for students in kindergarten through second grade. Saoirse had been using her home computer since the spring because the Chromebook shipment for younger grades was on back order. It arrived last week.

Previously, students in third grade and up got Chromebooks, and had the privilege of taking them home only from fourth grade up, Ms. Doyle explained. "Now because of partial remote they wanted to make sure all children had access to the same education," she said.

Christine Cleary, the acting Springs School principal, said during a school board meeting on Monday that the remote learning system "needs work. . . . It's not one size fits all." A parent survey will be sent out that will help the school district fine-tune its academic plans, she said.

"I think it's clear and organized, but I think what's happening is the motivational piece. Some of our students don't have the support at home and maybe we have to teach into that a little bit. That's outreach."

Springs School uses Google Hangouts for remote learning. Saoirse has a live Google Meet on Wednesdays "because it's easier for my teacher to do, because everyone is home on Wednesday. The other days that my teacher is teaching kids, it would be hard for her to do the Google Meets."

As part of cohort B, last names M through Z or thereabouts, the Quinns are on site at Springs School on Tuesdays and Fridays. (Siblings with different last names are kept together.) On her remote days, Saoirse completes the set section of a physical packet given out once a week to her whole class -- on Monday to cohort A and on Friday to cohort B. That way, each group has five school days to complete it. Videos posted online by her teacher help the process on her Monday and Thursday home-learning days.

Adrie has live, 10-to-15-minute check-ins on Google Meets on Monday and Thursday. Like his sister, on Wednesday his whole class is online together as a group for a Google Meet. His work is all digital, so on remote days, he gets written or video instruction at the start of the day and has his work graded and sent back to him at the end.

So that "the kids get the exact same instruction weekly," Ms. Doyle said, Adrie will do the same lesson in school on Tuesday that the other cohort did in school on Monday. Likewise, the Monday in-person cohort does the same remote lessons, usually an assignment, or continuation of an in-person assignment, paired with prerecorded video or instructive slides. There is no live-stream teaching at Springs School, such as what the East Hampton School District is doing in many cases for its remote learners.

Also different from East Hampton, which puts children in cohorts in Monday-Tuesday and Thursday-Friday groups, the Springs in-person days are alternated (Monday-Thursday cohorts and Tuesday-Friday cohorts) so kids do not go long without being in-person with their teacher. "There's really only a two-day span where they don't see their teacher in the week. They can also reach out to teachers on remote days if they need one-on-one," said Ms. Doyle.

Wednesdays hark back to school days of yore with the full crew assembled on Google Hangouts and online games. The hardest part: "Not seeing my friends," Adrie said. "So my best friend, he's in my class, but he's in cohort A, so it's a little sad not seeing him. I saw him today though, in the [East Hampton] library, which was a pleasant surprise. We just met by chance."

Saoirse said she likes to "stick to the schedule" and, like her brother, prefers not to take breaks in between subjects. "It's a lot shorter than the school day. They recommend you do two hours every day, but I normally get done in an hour and a half."

Ms. Doyle explained that with 25 to 30 minutes per subject, it's hard to say how much less school itself they are actually doing.

Things like lunch, recess, gym (mask-less and distanced at 12 feet), plus special subjects like art and music, account for more time when peppered throughout an in-person day at school.

The Quinns try to finish school by 1:30 p.m. on remote days by consolidating academics on the front end. "I really like that we can all do something together in the afternoon. Take a walk, go to the library, or bike-ride," Saoirse said. Still, she said, sometimes, "it's kind of hard to find something to do after you're done."

To accommodate a more structured pickup schedule and temperature check (the first round of which is at home every morning), the first and last period of the in-person school day were cut, so that what used to be an 8:10 a.m. start and 3:11 p.m. finish is now an 8:45 a.m. start and 2:45 p.m. finish.

Also scheduled into the day are "mask breaks," for example, when students watch a video in school at socially distanced desks. Asked if it is hard to wear a mask all day, Saoirse replied, "No, not really." She said also that only the recess monitors have to be attentive to six-foot distancing as desk placement makes distancing easier for the rest of the day.

Springs School is in the middle of construction to ease overcrowding anyway, an approximately $23 million project that started well before the pandemic. The classrooms were small to begin with, said Ms. Doyle, but appropriately distancing the desks was achievable by having two cohorts take turns in each classroom.

There are 60 students in second grade at Springs, broken up into four classrooms, each with no more than nine students. Saoirse's cohort has only eight kids; the other cohort that occupies the same classroom on opposite days has six.

Adrie said that one new student in his class had moved here from New York City, but it seemed to the Quinns that the influx of students is on a par with what it would be in a normal year. There are 69 students in fifth grade, also spread across four classrooms, with each cohort also having a maximum of nine students.

Other differences in the school day include the fact that "only the eighth graders are doing Spanish this year. We used to do Spanish every year since first grade," Adrie said. Saoirse eagerly awaits November, when science will be added back into the school day. Some special subjects are in rotation as a result of the adjusted schedule.

The Quinn siblings are big readers. Luckily for them, the Springs School library still allows students to take out books as long as they take them home and don't leave them at school before returning them.

Even with all the changes in place this year, the Quinns have kept up with some of their usual habits, like walking to school each day.

"I don't walk, I run," corrected Saoirse, ever enthusiastic about the school day. "You run, yes," her mother confirmed.