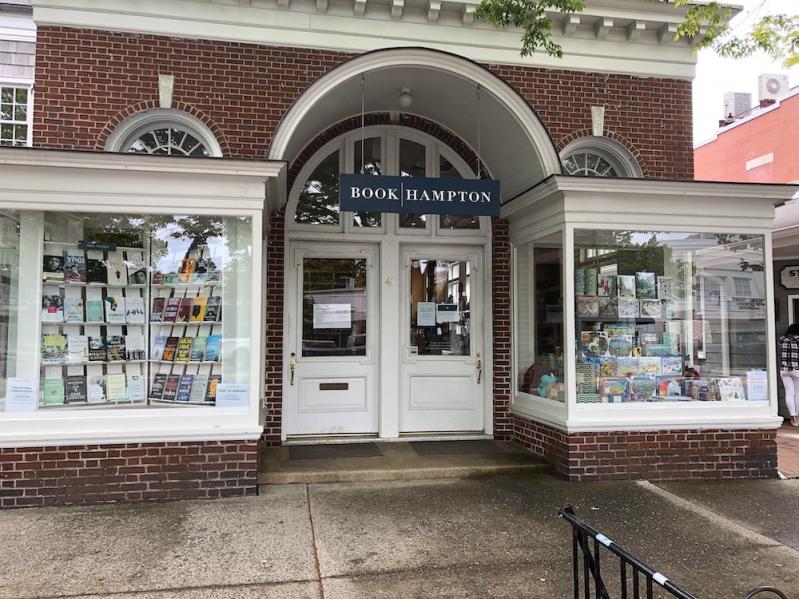 BookHampton in East Hampton Villag has been doing online orders and home deliveries, and as of this week is also offering curbside pickup.
Carissa Katz
By Christine Sampson

Two months of a nearly complete economic standstill came to an end Wednesday, when Long Island reached regional criteria necessary to reinstate some industries as evidence shows that the spread of Covid-19 here is increasingly under control.

Social distancing and mask-wearing mandates have not been lifted, and there is still a ban on gatherings larger than 10 people in New York State, but construction projects can resume, as can manufacturing, agriculture, forestry, charter fishing, wholesale trades, and retail with a curbside or in-store pickup model only as part of the first of four phases of reopening.

“That is a milestone and a very important one,” Suffolk County Executive Steve Bellone said Tuesday, “and a very important step forward for all of us. . . . This worked. We significantly flattened that curve [and have] been on a downward trajectory for a number of weeks now.”

The necessary steps included setting up a contact tracing program, and Mr. Bellone said Tuesday that the county has identified 1,368 tracers for that program. A state website shows net new hospitalizations have declined for 14 straight days, either by way of meeting those metrics directly or by taking a three-day rolling average of the numbers. The state website, however, has not been updated since Monday, and still shows the region has not met the hospital death criteria of a 14-day decline or fewer than five per day. There are fewer than two new cases per day per 100,000 residents — Suffolk’s rate was 1.06 as of Monday — and patient volume in hospitals is less than 70 percent in both regular beds and intensive care units.

Mr. Bellone, along with Nassau County Executive Laura Curran, is part of the regional control room that will monitor Covid-19 numbers and pull back on reopening plans if need be. On Tuesday, Gov. Andrew M. Cuomo called on the two county executives to be “disciplined.”

“Focus on what’s happening on those numbers,” Governor Cuomo said. “You see a little movement, you pounce on it. Find out what it is, explore it, and resolve it.”

Mr. Bellone said he knows “the economic devastation is real.”

The “priority is opening as quickly as we can . . . while keeping safety in mind. The last thing we want to do is reopen and have a spike in cases,” he said. “We need to do more and we are looking to do exactly that.”

“I remain very confident in the business community and their ability to respond positively to these measures and to do the common-sense things necessary for us to be able to do this safely,” Mr. Bellone said on Tuesday.

Looking ahead to the future, Governor Cuomo has said individual regions can move into different phases when their trends indicate it’s safe to do so — which could be more quickly than increments of two weeks, as he initially stated.

“The public also needs to be assured that they’re not going to be placed in harm’s way. The businesses realize that, and know they’re going to have to be practicing safe reopenings,” East Hampton Town Supervisor Peter Van Scoyoc said Tuesday.

The town’s Business Recovery Committee, formed last month to develop protocols for a reopening of commerce, and Dr. Bruce Polsky, an infectious disease specialist whom the board named as a consultant, will continue to advise during the reopening, Mr. Van Scoyoc said.

Throughout East Hampton Town, Mr. Van Scoyoc said, “I think it’s widely understood that it’s in everybody’s best interest to get this right and do it right the first time. People are not going to want to visit establishments — a restaurant or takeout, retail — unless their comfort level is such that they feel safe doing so. I have to say I’m very pleased with the way our community has responded.”

“We want to flatten the curve,” he said of Covid-19 infection. “We don’t want to flatten our businesses. I think we can do both, but it will take patience and cooperation from all involved.”

“The one thing we have become very accustomed to here, is there is nothing set in stone, particularly because everything about this is new,” Mr. Bellone said. “Everything is learning as you go along and adjusting to that as you take in new information.”

Greg Turpan, who owns a housewares store in East Hampton, said he has been in touch with other retailers, and has concluded that curbside will work for some businesses but not others. “You have to know what you want” for curbside, he said, but at his store, “people want to come in and look around.” At his Santa Monica, Calif., store, he has only done “a modest day’s business” since curbside sales have been permitted.

He is looking forward to phase two of the state’s reopening plans, when he anticipates inviting one customer in at a time, as long as the customer is wearing a mask. “I hope to eke out some semblance of business,” he said.

Jesse Bartel, the manager of BookHampton in East Hampton Village, is looking forward to some level of personal interaction with customers now that retail can resume to a degree. The store has been doing online orders and home deliveries, but “it’s not why I got into the book business,” Mr. Bartel said.

Ironically, Wednesday — the day the reopening took effect — BookHampton was closed as per its usual operating hours.

The shutdown had a sliver of a silver lining for some retail stores, particularly bookstores, because Amazon had stopped shipping books and scaled back shipping of some consumer goods for several weeks.

“Things aren’t exactly flourishing economically. We’ve been doing okay, but at the same time we have to play it very carefully. We’ll kind of see what happens,” Mr. Bartel said. He called on people to shop locally as much as possible, particularly post-pandemic. “I think what’s best is to see what’s open, and if you like them, support them and find a way to give them money. Remember your favorite spots and see what you can do.”

But reopening is bittersweet for Stephanie Tekulsky, the owner of Steph’s Stuff in East Hampton Village. She is excited to offer curbside pickup at her store, she says, but it’s for a going-out-of-business sale. The lockdown pushed her to that decision, which she made in early April.

“You can’t pay these rents,” she said.

With Reporting by Jamie Bufalino and Christopher Walsh

New Dog Agility Park, Community Garden Sale in Montauk
HarborFest Is Canceled
Few Fireworks on South Fork This Year
Easing Stress on the Environment, One Flush at a Time
END_OF_DOCUMENT_TOKEN_TO_BE_REPLACED