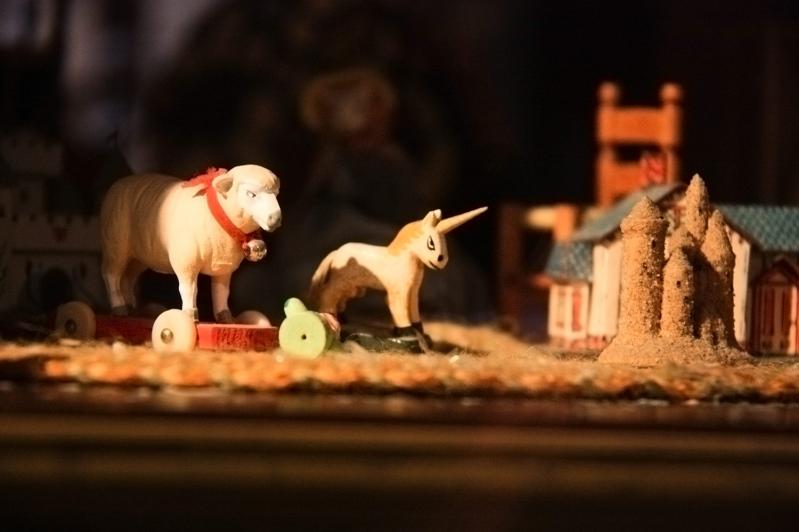 Making your hurried holiday rounds, as you sprint off Main Street and into the Ladies Village Improvement Society’s Bargain Box thrift shop — recently renamed the Shops at the L.V.I.S. — you cannot fail to notice the octagonal dollhouse in the entryway. It is huge, standing tall at 5-foot-4, with nine rooms, two bathrooms, a basement, and an attic. When you pause to peek inside, you see how intricately it has been decorated, with festive details that change with the seasons.

The dollhouse was donated by the late Deborah Ann Light to the L.V.I.S. in 1999, and it has become such an emblem of the society that there is, indeed, a Ladies Village Improvement Society Dollhouse Committee, at present comprising Jean Rickenbach, Joan Denny (who also was the president of the organization for three consecutive terms in the late 1990s), Mary Busch, and Lynn Cotter. 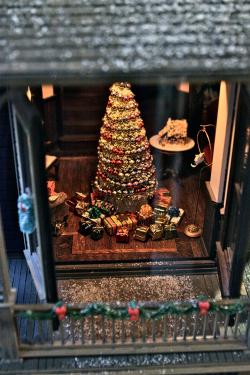 The committee is in charge of decking the dollhouse’s halls — and porch, and kitchen, and windows, etc. — four times a year, at Christmas and Hanukkah (a minuscule menorah has appeared for the past three years), spring (with an accent on Easter), the Fourth of July, and Halloween.

Mrs. Rickenbach, the committee’s chairwoman, said her favorite time of year to decorate is winter. “The living room at Christmastime, with the trees and all the presents . . . Christmas is the big, big thing.”

Although the public is advised not to touch the display, the committee members are allowed to move items about, of course — and they are not too old to occasionally indulge in a bit of kid stuff: “Whenever I’m down there I play with the people,” Mrs. Rickenbach said.

Dollhouses have been part of the L.V.I.S. culture for decades. For many years, Ms. Denny and Peggy Ann Sherrill, the first chairwoman of the Dollhouse Committee, furnished and decorated dollhouses that were constructed by East Hampton builders and auctioned off at the L.V.I.S. Fair each July. 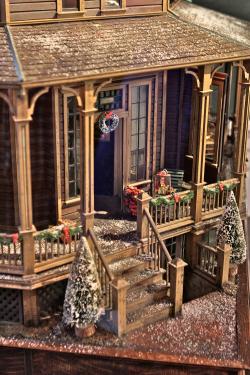 The late Ms. Light was an L.V.I.S. member and Amagansett resident who is probably best remembered for having donated 220 acres of Amagansett farmland to the Peconic Land Trust (giving rise to Quail Hill Farm and the nascent community-agriculture movement). She had been fascinated with dollhouses since 1976, apparently, and in 1978 worked with Michael Sinclair — an English summer resident, actor, and stage set designer — to design and build a miniature replica of Hook Mill, using the original plans, which was auctioned off at that summer’s fair.

Ms. Light and Mr. Sinclair invented an elaborate hoax about an imaginary painter, Walter Plinge, who — as they wrote in letters with fictional senders’ names to The Star — had lived off Main Street and was a “Victorian bachelor who liked to play the mandolin and an ornate harmonium . . . and to collect Delft.” (That is, blue china with windmills on it from the Netherlands.) Sinclair even gave a scholarly talk about the fictional character and the history of the windmill the day before the fair. 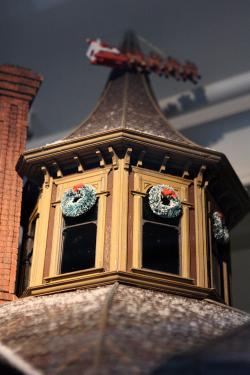 Ms. Light’s imagination is still evident in the furnishing of the extant L.V.I.S. dollhouse. Ms. Denny highlighted notable features of the room decorations arranged by Ms. Light that remain as they were in 1999: “The bed, with the Tiffany box and the rose on it” — conjuring up the idea of a tryst — “is so romantic.” And the parlor, “decorated with a gentleman in mind . . . Deborah did all of that,” she said.

The house was commissioned by Ms. Light in 1979, to be built by Pat and Noel Thomas of Sea­view, Wash., miniaturists and artists who constructed some of the country’s most wondrous dollhouses. The couple were particularly known “for creating an illusion of reality that evokes memories from the viewer,” as they wrote on their website, “memories jogged by such details as broken lattice where a dog might have scratched his way under the house, smudges around doorknobs and stair railings, peeling paint at the back door, and rusted chimney flashing.”

Previously, the Thomases had been known for miniature houses in a Queen-Anne-ish style, but they were ready for something different. The something different you see today in the front hall of the L.V.I.S. was based on an Orson Fowler-designed residence in Irvington, N.Y., which is on the National Register of Historic Places. (Fowler, an architect and phrenologist, was the author of an 1848 book titled “The Octagon House: A Home for All, or a New, Cheap, Convenient, and Superior Mode of Building.”) They spent at least six to nine months building it, installing cabinetry, and wiring it for electricity, and the lilliputian re-creation was shipped east to Ms. Light in 1982. The first time she saw it, she later wrote, she “promptly burst into tears! It was so beautiful.”

Ms. Light had moved to Sag Harbor by 1999, and was in failing health. She asked Ms. Denny to lunch one day, and told her that she had offered the dollhouse to several museums, each of which had been interested but none of which was willing to sign a contract agreeing never to sell it — so was offering it to the L.V.I.S.

Ms. Denny took the proposition to the L.V.I.S. board, who, after hearing that caveat, not to mention the insurance cost, etc., voted five for, five against. As the board’s chairwoman, Ms. Denny could have cast a vote to break the tie, but decided instead to take the offer to the entire membership. She called a meeting, told the story, and put it to a vote. This time, the result was unanimous.

Ms. Light paid to remove a wall of her Sag Harbor house to get the dollhouse safely out. It was carried away with care to its forever home, and will remain there, it seems, an emblem of generosity and creative whimsy for the delight of generations to come.

The L.V.I.S. dollhouse, decked out in marvelous decorations for the holidays, has an amusing history.