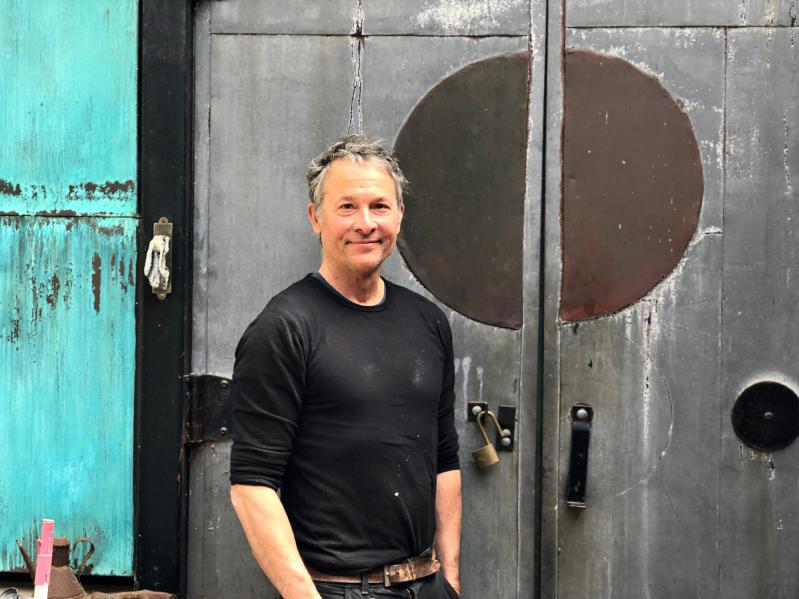 Mr. Dobler, above, made the big metal doors behind him at his sheet metal studio in Northwest.
By Carissa Katz

Sheet metal runs in Max Philip Dobler’s blood. His grandfather, who immigrated here from Germany in 1925, was a sheet metal worker and eventually passed the business he founded in Bellmore, Max Dobler Tinsmith, on to his son, Mr. Dobler’s father. Among his father’s projects was a copper roof for the Montauk Lighthouse for a renovation in the 1970s. By the time the youngest Mr. Dobler was in junior high, his father had him working “every available hour.” And by the time he finished high school, he could operate nearly every piece of equipment in the 3,500-square-foot shop.

He would go on to run that shop himself for 27 years and now has a fully-equipped metalworking studio behind his house in East Hampton’s Northwest, where he continues to fabricate everything from zinc countertops and commercial freezer channels to fireplace surrounds and handcrafted benches.

“I really never wanted to go into the metal industry,” he said earlier this month at his studio.

Mr. Dobler had a passion for photography from an early age and moved to Paris to pursue it after college. “Back then, in the ’80s, you could live in Paris for like $3,000 for the year.” He spent another four years working in product photography in New York before being called back to the family business. “The money was there, and it wasn’t in photography, and I had to make a career choice,” he said. But he never left photography behind — readers of The Star will recognize his name as a frequent contributor of photos to these pages.

For the 27 years he ran the metal shop, its projects took his attention. The shop used to make all the metal dog coffins for the Bideawee pet cemeteries. It produced kitchen exhaust systems and stacks for food processing facilities and even outfitted an entire pharmaceuticals laboratory, everything from the pill-collection systems to the air-conditioning units on the roof. He started making furniture when he rejoined the family business and has been doing it ever since, mostly as a creative rather than commercial pursuit.

He had all the tools he needed at his disposal. “For my apartment, I needed a table, so I would make a table out of copper and brass with inlay,” he said. Twenty or so years ago, he began to make copper grandfather clocks, too. “I loved old French antique grandfather clocks, so I decided it would be cool to make something out of metal.”

He has been working on a series of benches constructed of plywood clad with sheet copper, and in the case of his most recent creations finished with a layer of melted tin. The base of his current project features squirrels and an acorn in a stenciled design he hand-cuts with a jigsaw and then bends around the wood. When it is done, none of the wood will be visible. Birds adorn the base of another. The animal motif is a favorite, used also in an earlier series that had live-edge wood seats and steel bases.

He has shown the benches with the East End Design Group at Ashawagh Hall in Springs. For the right price, he can be convinced to sell, but short of that, he’s happy to hang on to these labors of love, each one representing hundreds of hours of work.

Among the more visible commercial projects fabricated at his studio in Northwest are the zinc countertop at the Roanoke Vineyards tasting room on Love Lane in Mattituck and the horseshoe-shape hot-rolled steel bar top at Coche Comedor, the new Mexican restaurant in Amagansett owned by the team behind La Fondita, Nick and Toni’s, Rowdy Hall, and Townline BBQ.

Mr. Dobler’s sister, an architect, drew up the plans for the studio, which includes two small buildings joined by a covered outdoor space. He did the copper roofing himself, and all the glass and steel work, and made its big metal doors with material left over from a job at the Merrick Library. His house, too, is filled with his creations, from the kitchen counters to the copper wood stove surround.

“The reason why I do this stuff is because it’s fun,” and his studio, part inside and part out, adds to the enjoyment. “I just love being outside. And in the summer, it’s light until 8:30, so I can listen to music while I work.”

Hoedown on the Farm, Cocktails in the Garden
Main Beach Free Concerts in Final Weeks
Services and Counseling After Death of Popular Teacher Assistant
END_OF_DOCUMENT_TOKEN_TO_BE_REPLACED