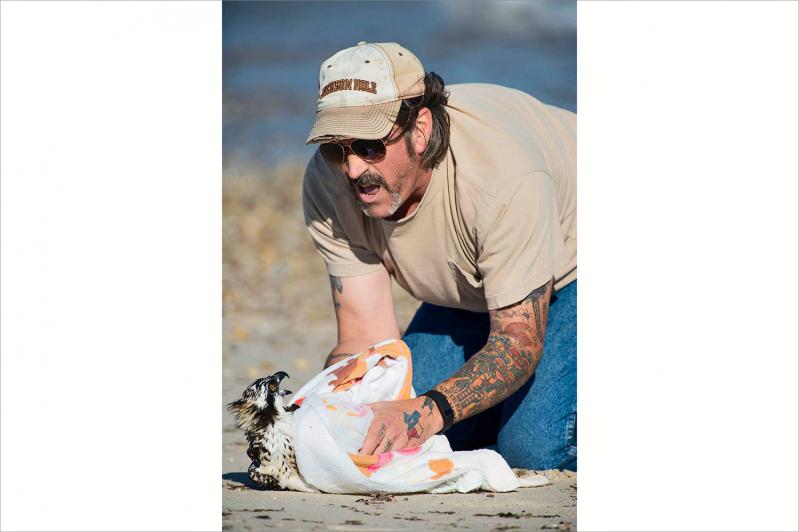 Dell Cullum in action. A night of comedy at the American Legion Hall in Amagansett on April 3 will raise money for his Wildlife Rescue of East Hampton nonprofit.
Doug Kuntz
By Jeff Nichols

I did not hear about Dell Cullum the way most people do out here. I did not read one of the many articles Dell has been celebrated in, I did not attend an event that Dell was asked to speak at regarding protecting and saving our wildlife, nor did I know about his television show on the local LTV channel or his many short films. I also never called Dell in the middle of the night regarding a raccoon in my house, or during the day to help with a deer entangled in a fence.

This is how most people encounter Dell Cullum. My encounter was far more pedestrian, if you will.

For me, it was a court order. To avoid a large fine and points on my driver’s license, I agreed to 24 hours of community service. This brought me in contact with Dell.

The Town of East Hampton furnishes you with a list of participating community service supervisors to choose from. As I looked down the list, I noticed that roadside trash removal was an option. I had always admired people who pick up trash along the sides of the roadways. It looked like rewarding work in which you see the results of your efforts instantly. I also liked some of the tools these people used, like the thing that grips the trash.

For some strange reason, some people still have no problem with throwing their trash out their car windows, or just tossing it on the ground. This is quite evident as you drive any of our major roads.

Dell returned my phone call quickly and was remarkably friendly and laid back. He told me rather than babysitting me while I picked up trash, he would pick up trash with me. Not in the same location, but farther up the same road or along a neighboring road. He supplied me with trash bags and gloves, which he paid for himself, and thanked me repeatedly every time I finished a work session.

I must admit, it was tempting at first to go through the motions, fill a couple of bags, and claim more hours than I worked, but there was something humane and nonjudgmental in the tone of Dell’s voice. He trusted me and appreciated my efforts, and because of this I did not want to let him down.

I chose the Napeague stretch to pick up garbage. At first I was a little embarrassed, as certainly people who knew me would see me, but the more I worked the less I cared who saw me or what they thought. I was being productive. I would do two hours each day for a couple of weeks.

After each session I would take photos of the trash I collected and proudly email them to Dell. His response would always be, “Great work, thanks for your help.” When I completed my hours of community service, he wrote the judge a wonderful letter boasting of my hard work and what I had accomplished.

About a month later, on a Sunday, I found myself in a melancholy state. I was 52 years old, had no kids, and lacked a real career, which had me feeling pretty hopeless. A week earlier, I had noticed a lot of trash along Three Mile Harbor Road near the dog park, so I picked up a few large trash bags and went to work. Within 10 short minutes my depression had completely lifted; I felt useful.

Now at least once a month I grab a trash bag and do what I can. Does it help? I don’t know, but it sure makes me feel good. I also believe that after doing a good thing, when you tell people about the deed it loses power. But in this case it might help someone else beat the blues.

A month later, I saw Dell’s campaign to remove trash cans from the beaches and put them back at the road ends and was shocked by the difficulty he was having. I started watching his films on YouTube and became a real fan. When I heard that Dell’s nonprofit organization, Wildlife Rescue of East Hampton, was getting 501(c)(3) status, I wanted to do a fund-raiser free of charge to help.

For those who don’t know, the team at Wildlife Rescue of East Hampton is a group of experts from organizations across the East End of Long Island. Many of these folks volunteer for other rescue or rehabilitation operations year round, as does Dell, who thought it would be beneficial to both the wildlife and the rescuers, as well as the community, to organize the rescue responders in a way that wouldn’t overwhelm this small group.

When the same folks respond to emergency calls day after day, it can become both mentally and physically exhausting. This can easily render a rescue responder unfocused, which can result in injury to either the animal or the responder or both. Wildlife Rescue assigns its dedicated responders to daily or weekly shifts depending on the season. This enables an active responder to be on call at all times during the shift to respond to emergency calls or pickups, or to transport injured animals from one medical facility to another.

So to help Dell and our wildlife, a fund-raiser was in order. This is what I do. When I moved out here 15 years ago, I noticed that a lot of events were having B-level comics perform. This bothered me, because I know what comics’ fees are, and I knew that the producers of the shows were bringing out semiprofessional comedians and passing them off as national headliners.

So my goal was to bring out top Manhattan comics. With real, not made-up, credits. I’ve produced shows for the Montauk Playhouse, Southampton Hospital, various fire companies, the Southampton Lions Club, as well as for many national causes, like Autism Speaks.

I was in show business for 15 years. In fact, a movie was made based on a book I wrote, “Trainwreck.” It was a spotlight film in the 2007 Hamptons International Film Festival and, retitled “American Loser,” went on to become an HBO feature presentation. For 15 years I was a comic myself and got to know all the big acts, all the major national headliners, like Jim Gaffigan, who helped us raise $60,000 for the Jimmie Heuga Legacy Foundation, which gives scholarships to those with multiple sclerosis.

For Dell, I was able to secure Dan Naturman, who was a regular on the hit HBO show “Crashing.” Dan has been on multiple late-night shows, including David Letterman’s and Conan O’Brien’s, a collective 10 times. Dan had his own Comedy Central special and was a semifinalist on “America’s Got Talent,” among a long list of appearances. Dan works clean and is remarkably clever. One of the best acts in the country.

Equally as impressive and hilarious are the openers, Sandy Marks and Meghan Hanley. I will M.C.

Jeff Nichols lives in Montauk. More information is at jeff-nichols.com.