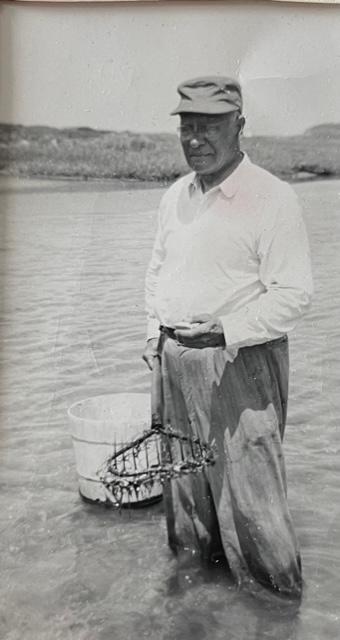 As he had done with his father, and that father with his father back through the generations, my grandfather Jesse Halsey enjoyed clamming all his life. He left us a handwritten account of a day in the 1920s that he spent honing his clamming skills with Charles Sumner Bunn and learned to cook clam chowder from Charles’s mother, Mary Emma Bunn. The Bunns were members of the Shinnecock Nation, and clamming and clam chowder for the Bunns were traditions passed down over many millenniums.

And so it was that Grandpa’s story begins: “Charlie Bunn knows the ways of ducks and geese, of the winds and waters and the tides, also the lands beneath the waters. He can find fish, oysters, and clams — and for chowder one must have clams. If you want the best clams you must go with Charlie Bunn. Take old clothes or a bathing suit, wear shoes that won’t be hurt by water . . . go to Sebonac Beach off Cow Neck Point to east’ard of the Old Cut . . . and catch your own or at least watch him do it.”

Timed for the falling tide, Charlie and Grandpa drove to West Neck Landing and took Charlie’s motorboat a mile down the harbor through the “gut” into Peconic Bay. After an hour of clamming, a couple dozen clams in hand, the two left the water and drove to Mrs. Bunn’s home on the Shinnecock Reservation. There, she had a hot wood fire waiting their return. After demonstrating how to shuck the clams, Mrs. Bunn chopped them using a whalebone-handled knife carved by her husband, David Waukus Bunn. This was a round-tipped clam knife that had opened four decades of the hinged shells of delicious mollusks.

Grandpa took careful note of Mrs. Bunn’s chowder preparations. He admitted, however, that he never knew the exact herbs that she picked. She simply walked around the yard cutting whatever herbs she found and folded them into her apron. Removing the leaves, she threw what she’d picked into the bubbling iron pot of chowder. “No good cook tells all,” Grandpa wrote.

After watching the preparations, the three enjoyed large helpings of Mrs. Bunn’s clam chowder. In his story, Grandpa recorded complimenting Mrs. Bunn on her chowder as “an emulsion of Pelecypodan deliciousness,” to which she responded, “It’s always a little different each time, and it gets better each time you make it.”

So it was that some 30 years later, Grandpa took my sister and me and four cousins clamming and taught us to cook Mary Emma Bunn’s clam chowder. We clammed on the shores of Great Peconic Bay near enough to Sebonac to find ample nests of clams. When the tide was low all the cousins ran splashing, leaping, and screaming into the warm salty water. Charlie, Sophie, Joe, and Bill grabbed an eagle-armed clam rake. Margot and I stayed close to shore and used our wiggling toes to dig deep into the sandy bottom to uncover our mollusks. We searched for the hard-shell, round-shaped clams that fit in the palm of your hand. As the tide came in, Bill and Charlie lugged the heavy clam basket up the sand dunes into the kitchen.

There, following Mrs. Bunn’s dictate, we laid out our harvest on the counter to let “the bivalves relax their tension.” Soon after, one by one, Grandpa deftly slipped the clam knife into the slight bevel at the corner of the shell, and with a quick turn of the wrist — “kerplunk” — the succulent insides dropped into a wooden chopping bowl. The clam juice was saved and the clamshells were washed and stuffed into a bag to be strewn later onto the driveway.

After coarsely chopping the clams, all the chowder ingredients were put on a table beside the outdoor log-burning brick oven. Into a large iron pot went chopped Canadian bacon to brown followed by sliced onions. Then the clams. Water and clam juice, sage, thyme, marjoram, a bay leaf, a pinch of clove, some white pepper, and salt were added. The chowder simmered covered for a good hour. Twenty minutes before dinner, Grandpa added diced potatoes and freshly chopped tomatoes.

As he made final adjustments to the seasonings, the steam from the pot filled the air with the salty, heady aroma that only a mixture of onions, bacon, tomatoes, and clams can produce. With the gong of the dinner bell, the magic moment arrived. Reverently and gleefully, the sunburned faces of the Halsey cousins, their parents, and grandparents scrunched together around a large round wooden table under a canopy of pine trees. We hungrily feasted on pungent, textured, earthy clam chowder made from hand-dug clams grown in the briny waters of Great Peconic Bay.

And indeed, as Mrs. Bunn told Grandpa, this ancient recipe is always a little different each time, and it gets better each time you make it.

P.S. You can find Mary Emma Bunn’s recipe for clam chowder on page 58 of David Bunn Martine’s book “Time and Memories: Histories and Stories of a Shinnecock-Apache-Hungarian Family.”

Cynthia Van Allen Schaffner is a decorative-arts historian. She lives in East Hampton.

Mashashimuet Park's History and Future
A Conference for Young People to Create Solutions
Get Outside, Get Moving
END_OF_DOCUMENT_TOKEN_TO_BE_REPLACED