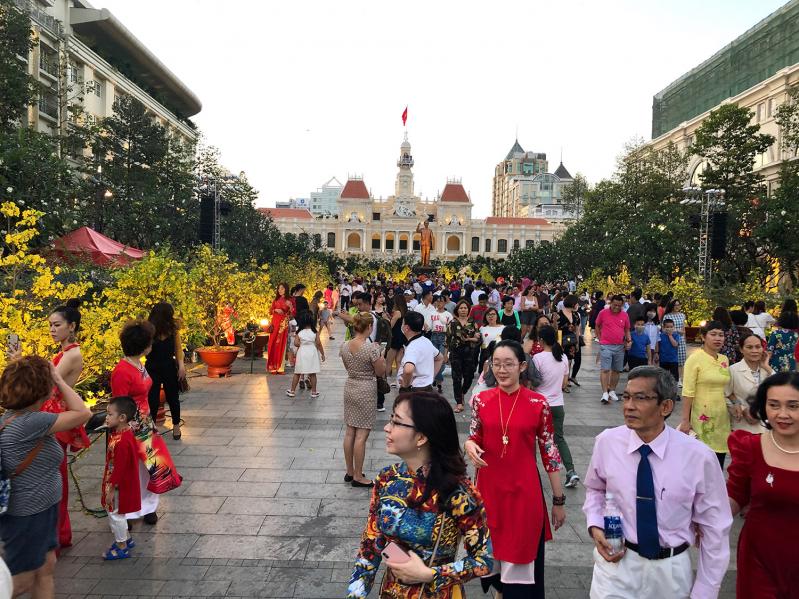 The old City Hall overlooking Ho Chi Minh Square and its holiday crowds on the eve of Tet on Jan. 24, 2020.
Peter Boody Photos
By Peter Boody

Vietnam was my war, even though I never served there. It framed my youth. For years, after I reached a certain age and the past began to take on a glow, I longed to see the country. I finally got there at age 69, in early 2020, just before Covid hit.

Now I keep a roll of Vietnamese bills in a see-through knickknack box on my desk, all with Ho Chi Minh’s kindly face smiling at me. They were in my pocket when I landed back at J.F.K., one extra-long day after I had stood with my travel group on a high hotel terrace on a hot January night in Saigon, overlooking the cheering throngs in Ho Chi Minh Square, all of us watching a spectacular fireworks show celebrating the eve of Tet.

Earlier that day, I had first gone out on my own, as shadows lengthened late in the afternoon. I had wanted to be alone in Saigon for at least a little while; I also had gotten it in my head that I had to stop at the famous old Hotel Continental and sit outside with a gin and tonic as dusk fell.

I wasn’t sure where I was headed. I couldn’t keep the complex Vietnamese street names straight in my head long enough to correlate them to the map on my iPhone. Using its compass, I headed in the general direction of what I guessed was the heart of the city until I sensed late evening light spilling across the street ahead.

There was an open space on the right with sawhorse barricades to keep out vehicles and, on the left, a large, well-set-back building that came fully into view as I walked: an ochre, Beaux-Arts gem with wings and towers, like some crazy Frenchman’s fin-de-siecle vision of a Russian wedding-cake palace. It was the old City Hall, which the Communists had continued to use as a municipal building instead of blowing up. I’d never known such a charming icon of French imperialism existed. It felt like my own discovery.

I turned toward the open park on my right and walked through the barricades into Ho Chi Minh Square. A wide pedestrian mall that extends about half a mile to the Saigon River, it was jammed with people, many dressed in spring colors for Tet, couples on dates, families on a holiday. They paid no attention to me or to the centerpiece of the mall at its north end as they happily strolled by: a gold statue of Ho standing tall, holding up a hand in a sign of peace and reassurance.

Almost all the people around me were too young to have known the Tet I remembered. By that final night of my trip, I had well learned that asking tour guides and hosts about the war was always a dead end. “That was a long time ago,” they’d say with a shrug. They had no interest in some old American’s aching war wonder, or his remorse for all the death and destruction, or his guilt for having let other young men deal with the war while he marched on Washington and drifted through those days in a haze of cigarette smoke.

I left the mall heading northeast to find the Opera House and, just across a palm-lined side street, the Continental. During the war, American correspondents, some just a few years older than I was, had gathered here and at the nearby Caravelle Hotel rooftop bar to unwind. Now I was on my break from the combat of writing zoning stories for The Sag Harbor Express and it was my turn.

I had my gin and tonic at a table on the sidewalk. A young Vietnamese couple on a date sat nearby. Vietnamese families arrived at the curb in limousines for their Tet dinners, the lissome women in glittery evening dresses, the men in dark jackets and ties, the kids in what I would have called their Sunday best. A violinist and accordionist on the other side of the entry played a sweet, melancholy riff on the Percy Faith hit “Where Is Your Heart,” as if it were 1961 when I was 11 and the great American adventure in Southeast Asia was coming to a simmer.

All around me, the Politburo’s new age of Vietnamese capitalism flourished, as if we had won the war. Dusk fell. Hidden floodlights clicked on to bathe the two floors above the hotel marquee in soft light. A bat arced across the gloaming.

“Tet”: Vietnam’s national holiday, the equivalent of our Christmas, New Year’s, and July 4th rolled into one. The first time I’d ever heard the term, I was 17, a student in a snowbound New Hampshire boarding school, smoking cigarettes in the butt room of my dorm, watching “Laugh-In” and “The Smothers Brothers” on the old black-and-white TV and Walter Cronkite on the “CBS Evening News.”

Beginning on Jan. 31, 1968, his broadcasts began to include ominous reports of mayhem breaking out all across South Vietnam: It was the Tet Offensive, a severe blow to the U.S. lie that the Communists were on the run.

The following year, my birthdate came up number five out of 366 in the first national draft lottery. I was certain to be drafted if student deferments were phased out, as rumored.

The feeling of that bleak time in my life, when I spent my days smoking and listening to James Taylor and Laura Nyro records in impotent angst, came roaring back to mind right after my return from Vietnam two years ago. Covid had begun its sweep, killing people and sparing others with no rhyme or reason. Dreading Covid when I was 69 felt eerily like dreading the draft when I was 19.

I dodged the Vietnam bullet. Nixon himself was my savior. Facing exploding resistance to the war, he gave up ground operations in favor of massive bombing attacks on the North to force Hanoi to negotiate. All that murderous thunder was the only reason the draft faded away and I never was called.

My beloved country in those days had the ability to deal with a corrupt leader, unlike my broken country today. But before he was driven from office, Nixon and his secretary of state, Henry Kissinger, declared “peace with honor” in Vietnam and left the war to the South Vietnamese to handle.

I remember sitting at my desk at The Southampton Press in 1975, one year into my life as a reporter, with a copy of The New York Times in my hands, staring at that soon-to-be-famous photo of an American helicopter atop the elevator shed of a nondescript building in downtown Saigon, a line of crouching people snaking up a ladder to reach it. I knew I was looking at a spectacular defeat, the first in the nation’s history, and I wondered how it could be that nobody seemed to care.

On my second-to-last day in Saigon, after our guide had led us off our small bus and gathered us like schoolchildren in the brilliant sunlight in the square outside the Cathedral of Notre Dame and the old French post office, I saw that same elevator shed.

“Look this way,” she said, pointing across the rooftops and low-rise clutter. The only difference from the 1975 photo was a modern office building that had risen behind the shed with a V-shape cantilevered roof, visible from all over downtown.

“Remember the famous photo of the helicopter?” our guide asked. “They always say in the caption that was the roof of the U.S. Embassy. It was not. That is an apartment building that the C.I.A. rented for offices during the war, and there it is.”

Most of the people in my group were not Americans. They came from Morocco, Switzerland, Britain, and Australia. Most were much younger than I. I don’t think it hit them the way it hit me, seeing a piece of the past come whirling up into the present like an asteroid.

Skeptics may see a silly grandiosity in some old baby boomer who never served in Vietnam feeling he had to see it with his own eyes — bedazzled eyes that never saw the corruption and authoritarianism that spoil the country’s willowy beauty.

“We don’t think about our government,” one of the hosts we met told me. It’s such a troubling notion. Why does it sound so refreshing?

When Tet comes next January, I won’t think of the war I missed. I’ll see and hear the holiday crowd in Ho Chi Minh Square cheering below me as the fireworks boomed and sparkled over the Saigon River.

I went humbly, with no pretense of connection. Even as Covid spread, Trump rampaged, and my own country turned more and more alien to me, Vietnam felt like a homecoming. Ho’s face on my desk somehow tells me there can be hope even in the most wretched of lands.

Peter Boody of North Haven has been a local reporter and editor since the 1970s. He is the author of the novel “Thomas Jefferson, Rachel & Me.”

A Holiday Gift for Surfers and Beach Lovers
Holiday Lights Go On at the Lighthouse Saturday
Covid Vaccine Clinic at St. Luke's
END_OF_DOCUMENT_TOKEN_TO_BE_REPLACED