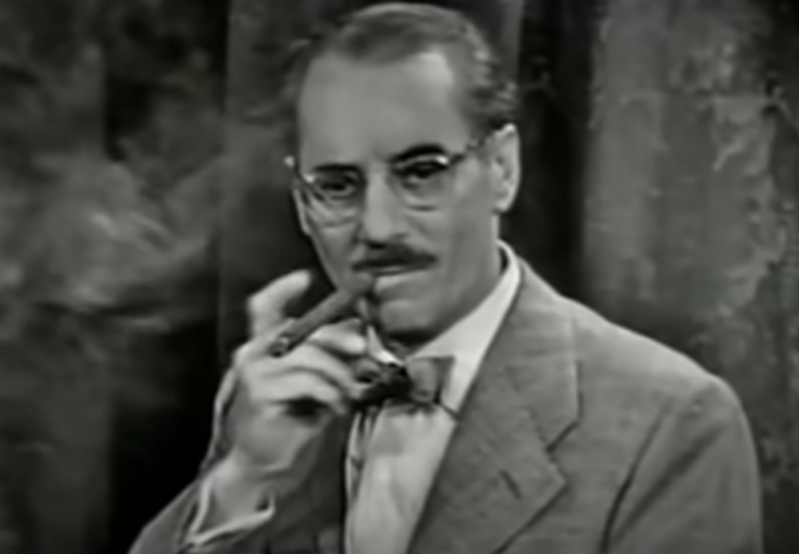 Groucho Marx on a 1955 episode of “The Jack Benny Program.”
CBS via YouTube
By Susan Israelson

The premiere of “Groucho & Cavett” this week on PBS’s “American Masters” documentary series brings back memories of the time I spent with one of them, and then both.

Boy, was I feeling sorry for myself alone and lonesome on Main Beach in East Hampton, the first glorious day of summer 1967. I’d made a monster mistake. Burnt out at Fire Island, I’d signed up for a share in my first group house, first time in the Hamptons, sight unseen.

The location was Lilla Lane in Springs. Tiny third-floor room, cramped house on the corner of nowhere, boiling hot, no air. A dump. This was the fabled Hamptons?

I got directions to the nearest ocean beach and had to drive for 20 minutes. Blue, I pouted on a blue-and-white-striped towel.

“Hello there!” boomed a big-time basso profundo. I looked up, shocked to see a smallish, handsome blond, bright blue eyes, engaging smile. A V.C.G. (very cute guy). A quick pick-me-up if ever there was one.

“Hi!” I smiled, thrilled. For the next three hours we talked nonstop. Yalie, hailed from Nebraska — that’s all I could pry out of him.

“No one comes from Nebraska,” I said, a New Yorker at my snobby worst.

“I do! So does Johnny Carson. The Midwest yields the best talking accent in the United States — the broad A.” Case closed and won.

We had an instant spark of connection. He had me in stitches. I laughed till I cried. Offbeat sense of humor, drop-dead deadpan delivery, and that voice — a mensch albeit a WASP. He withheld his name in spite of my bulldog questioning.

Later in that afternoon laugh-a-thon, “Would you like to go to a party?”

Was it Christmas? “Yes, is this coverup okay?” A blue-and-white pareu from Hawaii. I was clueless, nervous about what to wear to a Hamptons party.

“You look good in anything,” he answered. “The less covered up, the better.”

I followed him, a nervous Manhattan driver in my first rental car. We got somewhere, parked. Midway to the house, he stopped suddenly, assumed the classic Jack Benny pose, right hand at his cheek, left hand on right elbow, and stood there, frozen. Finally, “My name is Dick Cavett. I’m a writer on a TV talk show.” He didn’t mention it was the “Tonight” show.

As I was on the lam from my horrible house, Dick invited me to his on the bluffs in Montauk. He gave me instructions. Two pages. I sweated it, back roads to a highway, looked for a sign, took a right turn, fastened my seat belt. A killer long and bumpy dirt road on a horrific hill. I breathed a big sigh of relief when I finally got to a straightaway.

“Cavett Canem,” I saw. A clever telltale, playing off the Latin “cave canem,” beware of the dog. Woof.

Dick came out to greet me. “Welcome to the end of the world,” he teased. We could see the sea, the stark cliffs carved out over the millenniums — at the edge of time. Montauk had an eerie feeling.

What a house, a Stanford White masterpiece, Tick Hall, Shingle Style, built in 1882 by McKim, Mead, and White, sited by Frederick Law Olmsted. Dick gave me a Cook’s tour, especially proud of the player piano with huge silver discs: “Used to be Boss Tweed’s.” There was a framed headshot of a pretty girl. “That’s my wife, Carrie Nye. She’s away doing summer stock.”

We bantered and bonded through our love of words — puns, phrases, twists — and spent hours playing games, Anagrams and Scrabble. We both loved crosswords — he could do the Saturday New York Times puzzle in ink, genius level. He turned me on to the biweekly Double-Crostic. Of course, I got addicted.

Fast friends, free of romantic entanglements — I was recovering from a breakup. Platonic. Perfect.

His idol was Groucho Marx. They’d met in 1961. “It happened at the funeral for the great George S. Kaufman, incomparable playwright, director, and television wit,” he said. “He was Groucho’s god.” With damn good reason — he’d written all of the Marx Brothers’ greatest hits, “A Night at the Opera,” “Animal Crackers,” “The Cocoanuts,” and musicals of stage and screen. He’d given Groucho his best lines and persona.

“By chance I lived across from the legendary Frank E. Campbell funeral parlor, on Manhattan’s Upper East Side, which served as the next-to-last stop for so many celebrities. . . . I brazenly trailed Groucho as he left the event. It was a beautiful, warm spring day, and as Groucho stopped at the corner of Fifth Avenue and East 81st Street, I struck. Not very original, I know, but I said, ‘Hello, Mr. Marx. I’m a big fan of yours.’ ”

Groucho responded, “Well, if it gets any hotter, I could use a big fan.”

Dick and I stayed in touch.

Cut to Christmas 1970, time to take my clients out for Xmas lunch, the chairman of the board, president, and fashion director of Crompton Corduroy, its velvet and velveteen cotton mills in North Carolina, its New York showroom at 1407 Broadway. My bosses were there. A big deal.

At the Algonquin, we threaded our way past Cavett and Groucho sitting at a table in the bar to the right. My heart, already beating fast from the pressure of the bigwigs, stopped. Adrenaline rush.

“Hey, Susan, look who’s here.” Dick pointed at Groucho. How could this be happening? Flabbergasted. Yes but no. Conflict of interests. I pulled it together — my bosses and clients were my bread and butter — smiled, and continued to the Pink Room, table for six.

The three-martini-lunch fashion director asked, “Was that Groucho Marx we just passed?”

She had her usual, plus the champagne that the chairman had popped, smashing the crystal ceiling light.

The meal was marvelous. Drunken, upbeat, successful, many toasts, it had been a good year — I was doing a great job. But what should have been music to my ears was downed, drowned, bedeviled by obsession — how was I going to get to Cavett and Groucho? Would they still be there?

I had an idea. I’d let my lunch partners leave first, say I needed to go to the powder room: “Don’t wait, I’ll be late.” They filed out, I straggled, the plan worked.

Cavett introduced me, a glint in his eye. “Susan, I’d like you to meet Groucho Marx.”

“Sit down, young lady,” he said, “I’m too old to stand up.” I did, and pinched myself, yes, I was in the company of the GOAT, and Cavett, not chopped liver. Decades apart in age, but not really. Minds over matters.

I listened to their one-liners, uppers, zingers, winners as they played Can You Top This, saying magic words. A fond, erudite rivalry.

“Young lady, would you mind getting me some mints?” asked Groucho. I sprang up, walked to the bar, plucked a handful of white mints, didn’t like black, opened my hand, bowed in a grand gesture to give them to Groucho. “What’s the matter, are you prejudiced?” Rat-a-tat-tat. That fabled quick wit. A never-to-be-forgotten line. I still ponder it.

Groucho died in 1977 at age 86, Cavett’s present age, leaving a legacy of laughter.

I’d see Dick over the years, visit his Daphne Productions, knew that Tick Hall burned to the ground in 1997, that he and the late Carrie rebuilt it exactly as it was over three years, sold it for $23.6 million in 2021.

He loved my novel “Water Baby,” gave me a great cover quote.

A few years ago, at East Hampton’s Authors Night, Dick declared, “You had the best of me.”

My pleasure, I assure you.

Susan Israelson divides her time between East Hampton and Palm Beach, Fla. “Groucho & Cavett” next airs on Channel 13 on Saturday at 12:30 p.m.