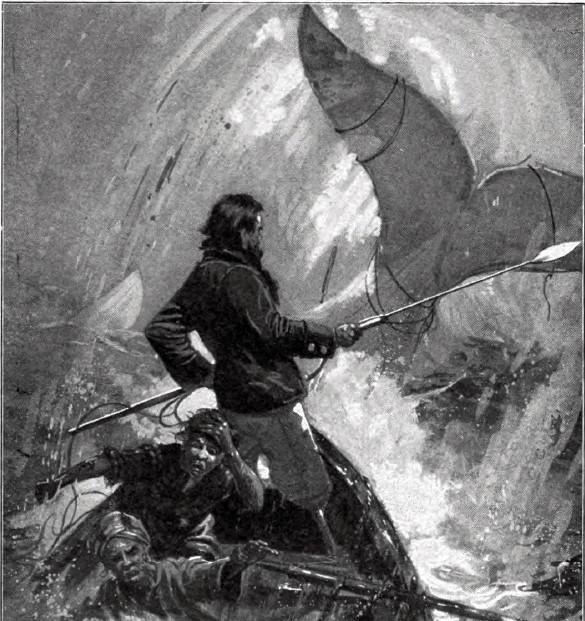 The recent true story of lobsterman Mike, who was swallowed and spit out by a humpback whale off the coast of Cape Cod’s Provincetown, was extraordinary indeed. In the past I was thrilled by accounts of such occurrences, but only in fiction.

I remember as a 5-year-old being taken by my father to the Roxy theater to see Disney’s “Pinocchio,” in which the boy marionette and his father, Geppetto, in the belly of Monstro the whale, scheme their way out by building a fire.

I remember a college course, The Bible as Literature, and reading for the first time the adventure of Jonah inside a whale.

I remember years later being bedridden for days with a cracked ankle and spending those days reading “Moby-Dick,” a book waiting on a high shelf for a long time whose time had finally come. The ankle pain dissipated as I sailed with Ishmael, Queequeg, and Captain Ahab to hunt the white whale.

I remember most vividly, however, the first Moby-Dick Marathon reading at my bookshop in Sag Harbor. Some 38 years ago — June 16, 1983, to be exact — Tom Clavin, a budding young writer then, an esteemed author of some dozen books now, came bursting in, having just listened to the annual reading of James Joyce’s “Ulysses” on WBAI. He suggested enthusiastically that we do it here.

Hmm, a marathon reading. Yes, let’s do it, but with a book that echoes Sag Harbor rather than Ireland, like “Moby-Dick,” I immediately thought. After all, whaling vessels did depart from our harbor in the 19th century, whaling captains are buried in our cemetery, we boast a whaling museum, a whalers church.

By midsummer our regulars as well as new faces were signing up for their 15-minute slots at our Labor Day weekend around-the-clock marathon reading. That Saturday at noon, Marilyn Goldstein, then the Hamptons thrift shop queen, clanged a found nautical bell, and Joe Pintauro began, “Call me Ishmael,” followed by his friend Kurt Vonnegut Jr.

The early encounter of Ishmael and Queequeg was fluently read by Peter Goodman, a Newsday music critic, and his father, who had driven in together from Montauk. Patsy Powers, an actress, delighted the audience with her comedic reading of the “clam or cod” passage, and the Rev. Rob Stuart of the Amagansett Presbyterian Church later intoned the great sermon in his pastoral attire.

The audience thinned out at dinnertime, but the reading voyaged on, and soon the small shop was packed again to hear the passionate, sweaty reading of the “First Lowering” chapter by an organic farmer, Hugh Williams, and the poet Max Blagg. Stephen Sanfilippo sailed across from the North Shore to sing a few shanties, and close to midnight Lee Foster, the mother force of Sagaponack’s Foster Farm, and her friend Gabrielle appeared in sailor apparel with a live parrot to witness their reading of “The Whiteness of the Whale.”

Enough of an audience was still around at 1 a.m. to hear Ed Butscher give an impromptu Jungian analysis of Melville. At 2 a.m., Hilary Knight, famed illustrator of the Eloise series, popped in with Phoebe Legere. She had just finished her racy singing gig at Bobby Van’s and was opting for a bit more literary act, which she performed with great class. By 4 a.m. we were a mere four die-hards who kept the marathon alive by reading aloud among us until the early birds began arriving just after 6 a.m. with platters of fruit and cheese.

Sloane Shelton appeared in her elegant Sunday best to read of the harem, the female whales caring for their young. Her dramatic projection betrayed her Broadway experience.

Soon Carol Williams, our expert garden writer, moved us to tears reading the lyrical “Symphony” chapter with her elegant British diction. Previous readers were returning for the dramatic finale of the whale’s disastrous victory over Ahab and the entire crew, except for . . . but I won’t be a spoiler for you readers who haven’t yet been on that voyage.

The Moby-Dick Marathon was repeated for another seven years, attracting actors (Kelly Patton, Viveca Lindfors, Ben Gazzara), prominent writers and scholars (J. Anthony Lukas), a crew of Newsday journalists, as well as local townspeople: students, teachers, artists, fisherfolk, farmers. By 1990 the marathon had run its course, and Moby Dick retreated to the bottom of the sea.

In 2015, however, after much hounding by the shop’s regulars, Maryann and Kathryn decided to revive the event to celebrate Canio’s 35th anniversary. They gave it their own spin by making it a moveable feast. The readings began at the shop, then moved to the Whaling Museum, to the Whalers Church, to the John Jermain Library, to the Eastville community house.

The marathon became a community involvement, and Canio’s Books is considered by many to be the caretaker of the Sag Harbor literary tradition started and sustained by the likes of John Steinbeck, E.L. Doctorow, Alan Furst, et al. Into that literary tradition has been woven the story of a white whale, a force of nature mighty enough to overcome its self-serving predators, but genteel enough to spit out a lobsterman who accidentally floated into its jaws.

Canio Pavone founded Canio’s Books in Sag Harbor in 1980, and turned it over to Kathryn Szoka and Maryann Calendrille in 1999 in order to have an extended residency with his wife, Nohra, in a small hilltop town in southern Italy.

Hoedown on the Farm, Cocktails in the Garden
Main Beach Free Concerts in Final Weeks
Services and Counseling After Death of Popular Teacher Assistant
END_OF_DOCUMENT_TOKEN_TO_BE_REPLACED