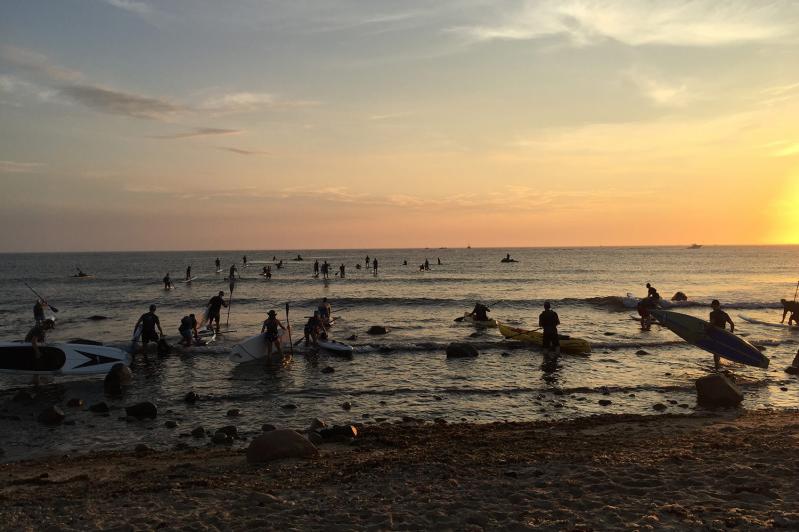 Paddlers readying for a past Montauk to Block Island voyage with Paddlers for Humanity.
Courtesy of Fred Doss
By Fred Doss

Growing up in rural Arkansas I was not confident in my athletic abilities. Certainly not when I was playing team sports. I know I would have been in higher spirits if I had believed in myself, self-identified as a better athlete, one admired by my peers. Instead, my lack of assurance in my abilities caused me to have knots in my stomach every time I played a team sport.

In gym class, I knew what was coming as the two star players would choose their teams. There I was with a couple other gawky guys, waiting to see who would be chosen last. Be it baseball, football, or whatever sport, I was always selected at the end. Standing there waiting for the torment to be over, I was nervous and embarrassed, and attempted to conceal my emotions for fear that someone would pity me or laugh at me. That would be intolerable.

Playing the actual game was as bad. Standing in the outfield — always in the outfield, where I would do the least damage — praying for the ball not to come to me was what I did every time. When it inevitably would, I hustled, occasionally catching or fielding it successfully, but it was the misses that haunted me. How could I have let the ball fall out of my glove? Humiliating.

It was hard to feel good about myself when, at least in my mind, I’m thinking the other players and the coaches would prefer that I wasn’t there. But was I really that bad, or did I just not believe in myself?

One of the few times I received praise for my play was in the fourth grade, when Mr. Stone, our principal and coach, came into my classroom and gave highlights of the football game the afternoon before. Standing in front of the class, he singled out a few of the guys for their good play, and mentioned me as having given it my all. I was shocked. Me, getting recognition for my play, no way. I was certain he was just trying to make me feel better, but maybe not. I had given it my all.

It’s not that I wasn’t an active kid. I loved to move and be outdoors. But in team sports I never found my groove. Fortunately, as I matured and became more assured, I did find satisfaction in sports, primarily individual sport.

I’m now a secure gay man living in Springs and married to my wonderful husband, John. June is L.G.B.T.Q. Pride Month, presenting an opportunity to celebrate and reflect, causing me to ponder if my awkwardness playing team sports was intensified because I was a gay kid.

Of course, there are adults of all kinds who can relate to what I am writing about — straight, gay, whatever — but it is noteworthy that most of my accomplished adult gay male friends tell me they had similar unpleasant experiences of playing team sports when younger. Like me, they tended to gravitate toward individual sport.

Why this was such a common experience is open for discussion. Perhaps it’s that being gay is being different, and not fitting into the heteronormative culture of male team sports. There’s a group mentality when playing on a team, and to feel that you’re not part of it, even if by perception, is extremely uncomfortable. It’s easier to stay in the shadows. Is this still the case for many gay kids playing sports today? I sincerely hope not.

I’m competitive and, if running in a foot race or skiing down a mountain, I want to win. Of course, I don’t always, but I will give it what I’ve got, sometimes to my detriment. That is why a few years ago while aggressively racing my friend Dennis down Aspen Mountain I fell, rolled a few times, and broke my clavicle. C’est la vie.

Contrary to my early years with group sports, my life here has been enriched in many ways by it. When my super-athletic friend Ed approached me about 16 years ago with his idea of organizing an 18-mile open-water paddle from the Montauk Lighthouse to Block Island as a nonprofit event, I wondered whether anyone would actually paddle that distance. He assured me people would do it. Little did I know then that over the years hundreds of people would participate in the Block Challenge, and we would be able to give away almost $2 million to causes related to bettering the lives of kids through the East Hampton nonprofit organization we founded, Paddlers for Humanity.

I’ve now done the paddle, either in a kayak or on a stand-up board, most of those years, with the encouragement of Ed and a remarkable group of people. I’ve had good years and I’ve had bad years. When the conditions are relatively smooth, good. When rougher and windier, bad. I prefer the good, but the bad has helped give me confidence to know what I am capable of.

Entering the water at 6 a.m. just north of the Lighthouse, and headed toward the glorious, florid orange rising sun, surrounded by others who enjoy their sport and whose hearts are in a good place, makes for a special experience. That community of athletes that eluded me as a child keeps me going on the paddle, no matter the conditions. I finally personally experienced the pleasures of a group of athletes coming together for a common purpose. Never will I be the elite athlete that many are, but I now realize that doesn’t matter. Enjoy the moment and do my best is now my motto.

I’ve made lasting and deep connections because of Paddlers for Humanity, with the participants, volunteers, and donors, but also with the outstanding staff at the organizations we’ve supported.

One of the most satisfying relationships began in 2017 when someone I didn’t know signed up for the paddle. I quickly surmised, both on the phone before the big day and while on the paddle, that Antony was a kind and intelligent person whom I wanted to know better. Spending time with him reinforced my initial positive instincts. Soon after, in conversation with my dear friend Joan, it occurred to me that Antony and her delightful daughter Hannah might enjoy getting to know each other. It pleases me that Antony and Hannah married at John’s and my house in Springs last year and are expecting their first child in September.

After a year when we could not organize the paddle because of Covid-19 restrictions, we will paddle again this year, on Sept. 18. I’m excited to be part of the group again.

Still, those uncomfortable childhood sports memories have stayed with me. I’m sure they have made me more resilient, but they don’t go away. The other night while sleeping, having started this piece earlier in the day, I had a vivid dream of walking onto a baseball field with the expectation of playing in a game. I was an adult, and was acutely aware of my anxiety. Would I drop the ball? Would I strike out? Would I embarrass myself?

I’m now strong enough that I could handle the embarrassment and go on my merry way. But if I’m chosen last, maybe not.

Fred Doss is taking part in a memoir-writing class at the East Hampton Library.