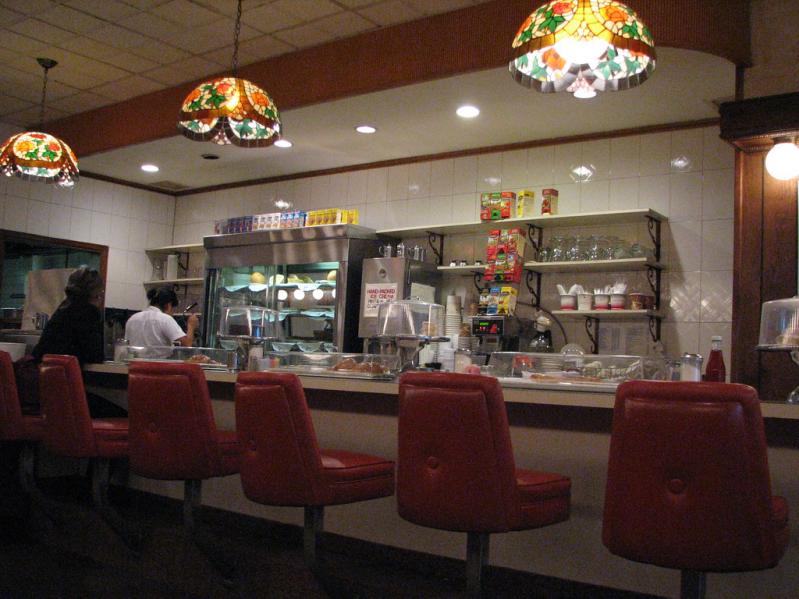 The counter at a Jahn’s Ice Cream Parlor in Queens in 2009.
SweetfixNYC / Creative Commons
By Frank Vespe

Coco was the most beautiful woman in the world, Halle Berry and Janet Jackson morphed into one — perfect hair, perfect skin, perfect lips, perfect figure — and as she washed my hair over the sink in the hair salon on 59th and Fifth, in the lower level of the G.M. Building, without hesitation, I blurted out, on that beautiful, early April day, the most eloquent pickup line I could think of.

“Wanna go out sometime, ya know, like on a date? Have a few drinks, dinner, maybe a little dancin’, ya know, stuff like that?”

“Sure,” she happily replied, her perfectly aligned, sparkling white teeth awakening me from my stare.

“At least now,” she continued, “I know how it feels to run my fingers through your hair,” and then continued to slowly and deliberately and rhythmically to the background music run her long red nails through my hair, smiling all the while, revealing another great trait: perfect personality.

“She’s the one,” I thought as I shoved into the Lexington Avenue #6 train.

We agreed to have dinner the coming Saturday, meeting in front of her high-rise in Rockaway Beach, not far from Rockaways’ Playland.

And when she exited her apartment’s lobby, as if in slow motion, that beautiful April evening, a white halo engulfed her, heavenly.

A special date demanded a special place: Salerno’s Italian restaurant of Richmond Hill, made famous a few years later in “Goodfellas,” and it did not disappoint — the veal marsala was tender, mimosas had the right O.J. and champagne mix, the escargots, swimming in butter sauce, really impressed her, and her nibbling on them was mesmerizing to watch. Everything was perfect, just like her, and no better place for dessert than next door, Jahn’s Ice Cream Parlor.

As we settled into our booth, far away from the crowd, the server came over to take our order, but unlike all the very predictable dates I took to Jahn’s, ordering vanilla ice cream with hot fudge, or chocolate with tons of rainbow sprinkles, or the few who savored coffee ice cream with chopped peanuts, Coco did something very out of the ordinary, very unpredictable, very exciting.

“I found the one,” I thought while she leaned over our booth’s white Formica table, slid her 14-inch, silver-plated spoon, filled with pistachio ice cream and a dab of whipped cream, slowly between my lips, and asked, “What do you think?”

Over the next three weekends, an awesome connection developed, with each date coincidentally finding its way to another Jahn’s — Jackson Heights, Forest Hills, Flushing — and her love of pistachio ice cream grew. And mine, too.

It was soon to end at the end of April.

Apparently, I wasn’t the only person to find Coco beautiful. An Upper East Side talent agent had his hair washed in the same hair salon, quickly offering her a 12-month modeling contract crisscrossing Europe, an offer too lucrative, too life-changing; she couldn’t refuse.

The following Saturday, we returned to the site of our first date, Jahn’s of Richmond Hill, for my last supper with Coco, promising to meet in Paris, Zurich, Roma, but it never happened, she traveled too much to settle down in any town for more than a few days, and so, c’est la vie.

I never returned to Jahn’s.

Ever since I moved to East Hampton in 2008, it was a tradition, with my four kids or with visiting friends during the summer months and in the off-season, to stop into Scoop du Jour on Newtown Lane and embrace their Jahn’s-like atmosphere, savor their Jahn’s-like fare, served fresh from behind the counter by ice cream servers with smiling faces reminiscent of Jahn’s in Richmond Hill, or Flushing, or Forest Hills, or Jackson Heights, but unlike the customers near me staring at the chalk-written wall menu, my thoughts raced back to another place, another time, when the most important thing in my life was a private booth, a vintage, flickering Tiffany light above me, in an ol’ ice cream parlor, sharing a wonderful moment in a wonderful place, with a wonderful woman who ordered a very different flavored ice cream, which has sadly melted away at the bottom of my chipped white ceramic bowl into nothingness, like the artificial Friendly’s pistachio ice cream I just bought at Stop & Shop on Newtown Lane, a few feet from the now-shuttered Scoop du Jour, and a million miles from . . . perfect.