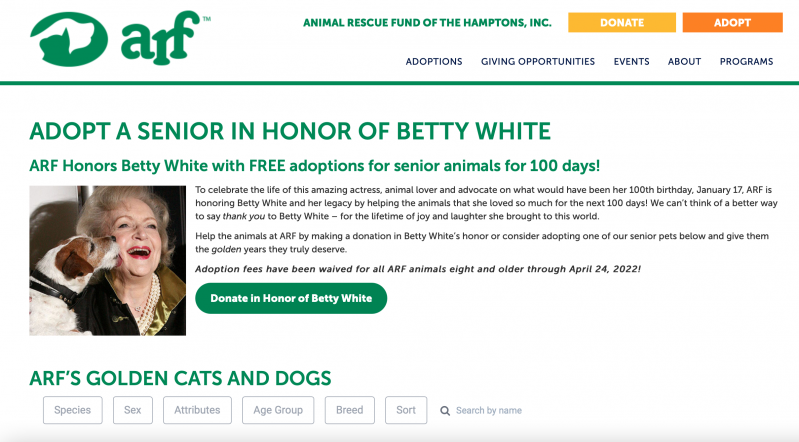 A screenshot of ARF's #BettyWhiteChallenge page
By Christine Sampson

Betty White, one of America's most beloved actors, would have turned 100 years old today. Also a lover of animals, Ms. White died on Dec. 31, and in her honor, a social media campaign called the #BettyWhiteChallenge is encouraging donations to animal shelters and rescue organizations.

Locally, the Animal Rescue Fund of the Hamptons and the Southampton Animal Shelter Foundation said in social media posts that they would welcome donations in her honor.

"We would be overjoyed if you would choose to support Southampton Animal Shelter Foundation and make her 100th birthday the movement she deserves!" said that organization, which established a fund-raising page for the campaign. It can be found here.

ARF said on Instagram that both donating and adopting a pet are ways to celebrate and thank Ms. White, who was known for her role on "The Golden Girls," for "the lifetime of joy and laughter she brought to this world." ARF's donation page, as well as photos of its "golden cats and dogs," can be found at this link. Adoption fees on senior pets are being waived for the next three months, ARF also said.

Free Car Seat Checks in Southampton
Battle of the Books, and More Fun for Teens
This Week's Happenings in Montauk
END_OF_DOCUMENT_TOKEN_TO_BE_REPLACED