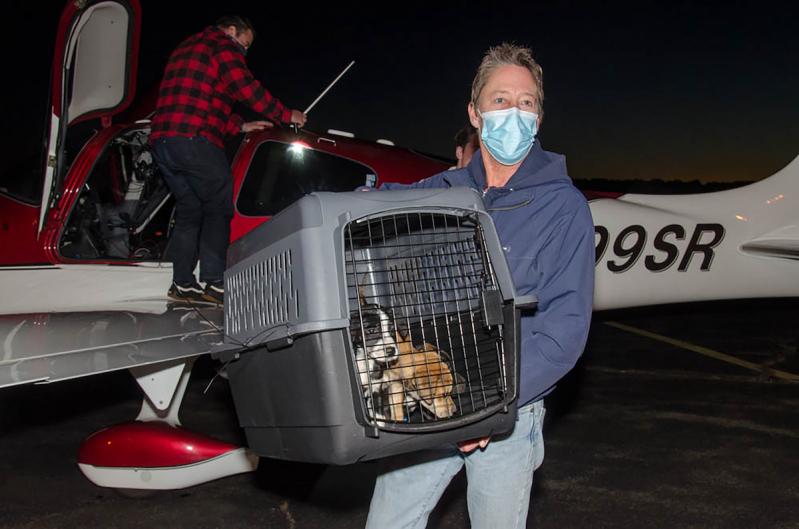 ARF was able to rescue 15 puppies with the help of Charles Canavan, a local pilot.
Durell Godfrey
By Gabrielle Topping

Fifteen lucky puppies were flown from Camden, S.C., to East Hampton on Dec. 18 in a collaboration between the Animal Rescue Fund of the Hamptons and a local pilot, Charles Canavan.

In organizing the  transport, Mr. Canavan, a flight instructor at the airport, killed two birds with one stone. His students, and some licensed pilots, require a certain amount of monitored flying time in order to be certified or to renew their licenses, he explained, and bringing the abandoned animals here for adoption would give the flight a meaningful purpose.

Brian LaBelle, an East Hampton Town police officer and pilot who needed recertification, offered his plane to be used for the rescue and to cover all expenses for the flight. Mr. Canavan and Mr. LaBelle flew to Camden to meet ARF's rescue partner and pick up the puppies.

Upon arrival here, the animals were taken to ARF, on Daniel's Hole Road in Wainscott, where they were medically cleared by veterinarians before being put up for adoption.

Scott Howe, ARF's executive director, reported this week that many of the puppies have already been adopted, with a waiting list for those that are still being cleared. Questions can be addressed to 631.537.0400 or online at arfhamptons.org/adoptions/view-our-pets/.