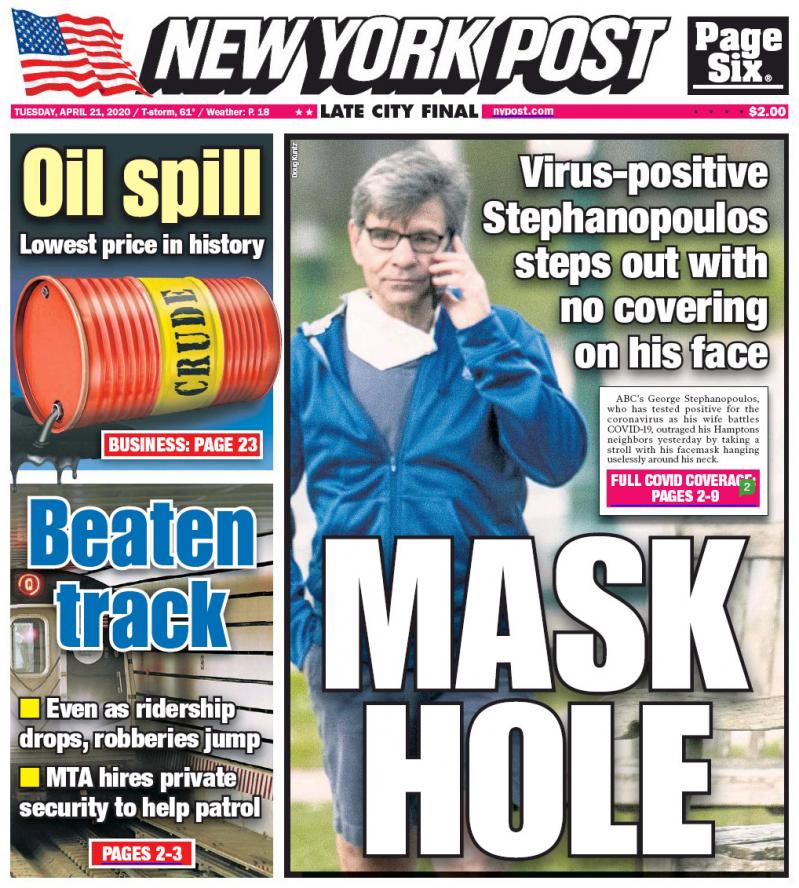 Apparently in reaction to his appearance on the cover of the New York Post Tuesday morning, the "Good Morning America" host George Stephanopoulos turned to Twitter to explain himself.

Tuesday's Post cover featured a photograph of Mr. Stephanopoulos walking near Guild Hall in East Hampton Village the day before, Monday, speaking into a cell phone but with a protective mask pushed down around his neck. The headline? "Mask Hole."

Before dawn on Tuesday, Mr. Stephanopoulos took to Twitter to state that, yes, he had tested positive for Covid-19 antibodies but had not experienced any symptoms, and that he had been admitted into a research study on plasma and its potential use in treating patients.

His wife, the actress Ali Wentworth, had reportedly been quite ill with the coronavirus around the end of March. The couple's health situation had become fodder for public discussion in early April, when Ms. Wentworth was interviewed on "Good Morning America" about her experience self-isolating in a single room while she recovered.

This was not the first time Mr. Stephanopoulos had caught flack for being out and about after his wife's public discussion of her diagnosis.

Good news for me and my family. Last week I tested positive for Covid antibodies, confirming I cleared the virus after weeks without symptoms. I’ve also signed up for a clinical trial to donate my blood plasma and expect to make the donation in the coming weeks

On April 10, Carrie Doyle, a murder-mystery writer with a house in East Hampton Village, called him out on Facebook after seeing him in White's Apothecary on Main Street wearing a mask and gloves.

“If you know someone’s wife has corona and the wife has been very very sick with it, do you think that the husband should be out at pharmacies picking up prescriptions when the pharmacy delivers and does curbside pickup?” Ms. Doyle asked her Facebook friends in a post that was subsequently deleted.