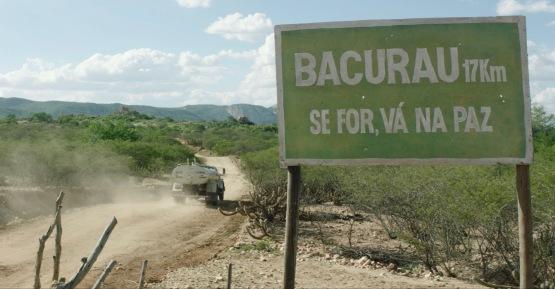 "Bacurau," a selection of HamptonsFilm's Now Showing series, is available for viewing with a five-day pass.
Kino Lorber
By Jennifer Landes

HamptonsFilm will continue its Now Showing series virtually by making available a movie selection weekly that can be viewed with a five-day pass that costs $12. The money will support HamptonsFilm, Guild Hall, and the distributor of the film.

This week's film is "Bacurau," about a small Brazilian village that has to confront some unusual invaders to save itself after its matriarch dies. The film was directed by Kleber Mendonça Filho and Juliano Dornelles. Upcoming films are Alex Thompson's "Saint Frances," Daniel Roher's "Once Were Brothers: Robbie Robertson and the Band," and Ken Loach's "Sorry We Missed You."

In addition, the Friday Flashback series will offer film recommendations from Alec Baldwin, co-chairman of HamptonsFilm, that can easily be found on streaming platforms. Viewers can then access a conversation via HamptonsFilm's website and on its YouTube channel that the festival presented following a past screening of the film. Titles included are "Icarus" and "Victor & Victoria." This week's film is 2015's "Listen to Me Marlon" with a conversation between the film's director Steven Riley and Alec Baldwin and David Nugent. The program is free.