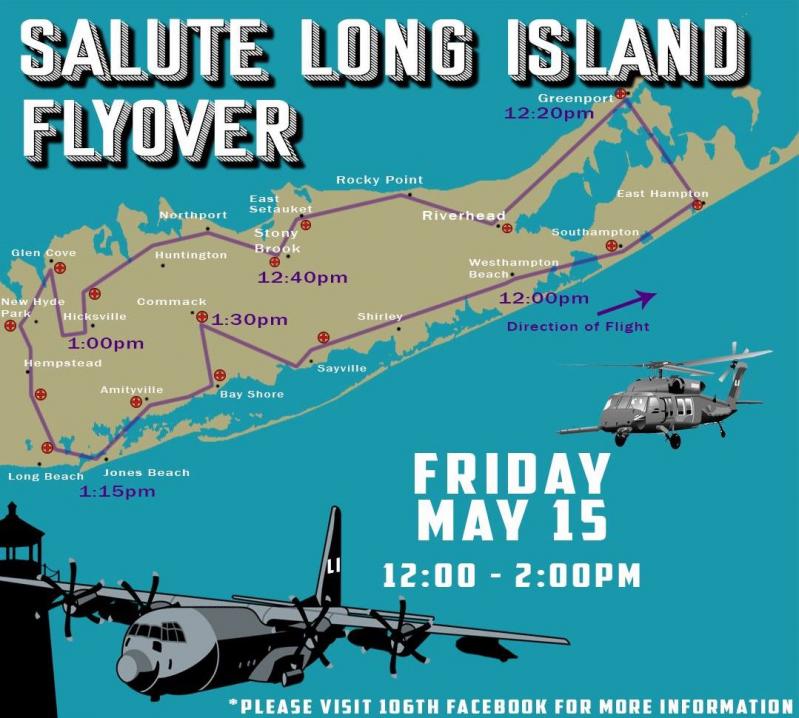 The New York Air National Guard 106th Rescue Wing saluted Long Islanders for their hard work to "fight against Covid-19" with a flyover on Friday afternoon covering the North and South Shores from Long Beach to East Hampton and Greenport.

"Wherever you are out there doing your part, this is for you!" the rescue wing, based at Gabreski airport in Westhampton Beach, wrote on its Facebook page.

Weather permitting, the wing's Combat King II and Pave Hawk aircraft were scheduled to depart from Gabreski at noon and to fly over more than two dozen hospitals and health care centers. They first headed east to Stony Brook Southampton Hospital and then the East Hampton Health Care Foundation, then passed over Shelter Island on their way to Stony Brook Eastern Long Island Hospital in Greenport. From there they flew to Peconic Bay Medical Center and west to St. Charles Hospital, the Northport Veterans Affairs Medical Center, and Nassau University Hospital, among others.

A rough map of the route, expected to take about two hours, could be found on the Rescue Wing's Facebook page.

East Hampton Samples Are a Crucial Contributor to Lyme Test
Ready to Adopt a Pet? ARF Is Ready, Too
Guild Hall's Curator Visiting Studios Virtually Through June
Seeking Stories and Images From the Time of Covid
END_OF_DOCUMENT_TOKEN_TO_BE_REPLACED