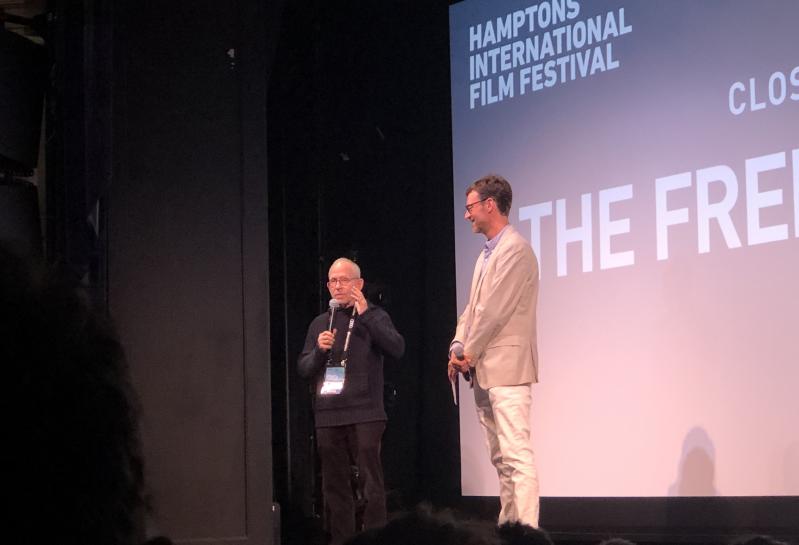 Bob Balaban, a HamptonsFilm board member, discussed his role in Wes Anderson's "The French Dispatch" with David Nugent during last year's festival.
By Jennifer Landes

In celebration of its 30th anniversary, HamptonsFilm announced on Wednesday an extended festival that will run Oct. 7 through Oct. 16 with screenings and programs across the South Fork.

Even before the Hamptons International Film Festival, the staff and affiliates of HamptonsFilm are looking back at what was screened at the festival to examine and reassess the films' impact during that time. For Black History Month, for example, the organization recommended titles such as "Strong Island," "The Untold Story of Emmett Till," and "I Am Not Your Negro."

Those participating in this program are staffers such as Anne Chaisson, the executive director, and David Nugent, the artistic director. Rajendra Roy, an advisory board member and the Museum of Modern Art's chief film curator, and Cynthia Lopez, the New York Women in Film & Television executive director, are also contributing.

"It felt appropriate to recognize this milestone," Mr. Nugent said, "by opening back up some of the most timely and necessary dialogues that these films have helped encourage."

More information on the program and where to stream selected titles can be found on the HamptonsFilm website. HamptonsFilm will bring its SummerDocs program this year and its Screenwriters Lab, which will take place this spring, meeting in person for the first time since 2019.

The festival is now accepting submissions through FilmFreeway. Passes and tickets will be available later in the year.