Z.B.A. to Prada chief: ‘When you start from scratch, comply with codes’ 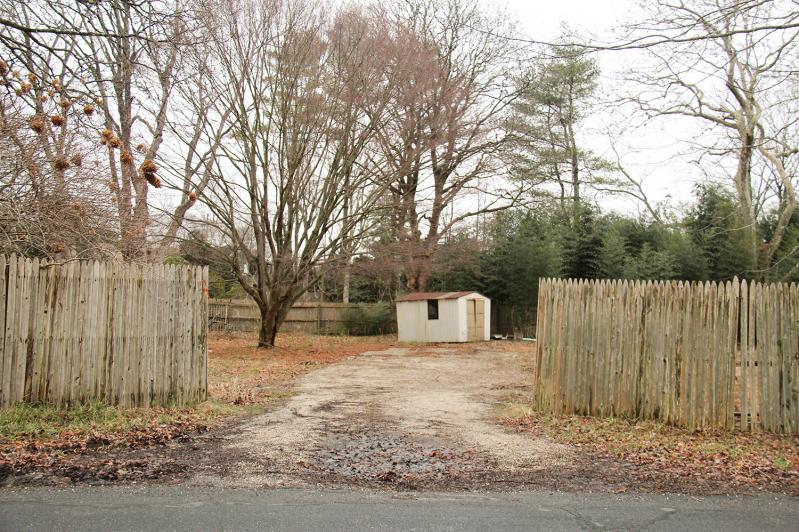 The lot at 16 Gould would be regraded to raise the house a couple of feet. Neighbors worry that could affect stormwater runoff paths.
Durell Godfrey
By Christopher Gangemi

“It’s a long list of a substantial set of variances requested for a cleared site,” said Joe Rose, a member of the East Hampton Village Zoning Board of Appeals, which shot down a proposal on Friday for a house at 16 Gould Street. Two board members, John McGuirk, the chairman, and James McMullan, vice chairman, recused themselves from the debate.

“It’s been the longstanding policy of the village, when you’re starting out from scratch, and you have a cleared lot, to comply with all codes,” Philip O’Connell, a board member, told Esteban Lopez of Arqui-Con, a construction company.

The proposed house seems simple enough by East Hampton standards. It would feature a detached garage, swimming pool, and a 2,887-square-foot house on the .35-acre lot. However, as designed, it would need no fewer than 11 variances.

“We understand that the list of variances is many, but we believe for each there is minor relief sought,” said Mr. Lopez, speaking for the property owners, Gianfranco D’Attis and his wife, Surbhi. Mr. D’Attis was recently named the C.E.O. of Prada.

Indeed, many of the variances were small. For example, only a .7-foot variance was requested from the house to the side lot line.

Mr. O’Connell said, however, that that was missing the point. “It seems you have the alternative to build a functional home and meet all the setbacks,” he said. “The other thing I noticed is, there’s a lot of mass, and that will change the character of the neighborhood. The aggregate of all those variances raises it to a substantial request.”

When the couple purchased the property, about two years ago, it contained a 2,250-square-foot house, which they tore down. A building permit was denied last June due to the number of variances required.

If the Z.B.A. receives an application to make changes to an existing house with constraints because of the lot configuration or other limitations, they consider it. For example, perhaps an existing septic system cannot be moved, which might mean a pool has to be located closer to a property line. Because the lot in question is fully cleared, however, no such constraints exist.

Two village residents wrote to the zoning board expressing concern with the application. Mary Busch wrote, “ ‘Building out’ or planning construction and then requesting variances to exceed the village code has become common. The code was written for the purpose of protecting the character of the neighborhoods and the privacy of adjoining homeowners and properties. It was not written to deprive a property owner of his/her rights.”

Elizabeth Reid, who lives directly across from the D’Attis property, worried about storm water drainage. She said heavy rains create “a small river” that runs through the yard of 16 Gould and flows to Newtown Lane. A drainage area adjacent to 16 Gould was supposed to absorb the water, she said, but if the D’Attises’ plan changes the grade of their property, it could cause the stormwater to be “inadvertently directed towards houses along Gould.” Those houses, she noted, are older, and “raised very little from the ground level.”

A larger variance was sought to place pool equipment in a back corner of the property, only five feet from the rear and side property lines, where 20-foot setbacks are required.

Mr. Lopez explained that because of the front lot-line setbacks, locating the house made for a very small rear yard. Positioning the pool equipment 20 feet from each lot line would mean it would be in the center of the backyard, “where the kids’ play area is designated to be.”

“We originally had the design to meet the codes, and we’re going back and forth with the owner, and they just kept growing it and growing it,” he added, suggesting that the couple might still make changes if necessary.

“I do want to go down the list and see which ones I really have to go back and change,” Mr. Lopez said. “Can I get some feedback?”

“In my opinion, you tore down a house, you need to comply. That’s my opinion on it,” said Mr. O’Connell.

“It’s one thing if there’s a house that’s striving to comply with the regulations as they’re drafted and then working to identify maybe one or two tweaks, related to say, the elevator, or to a marginal adjustment. But this is a wholesale, across-the-board, disregard for the code,” said Mr. Rose.

“It’s too big an application on a cleared lot, and you want us to do the work and figure out what’s going to be acceptable. Frankly, I find it a little insulting,” said Andrew Baris, another board member.

“My advice to you is to start over.”