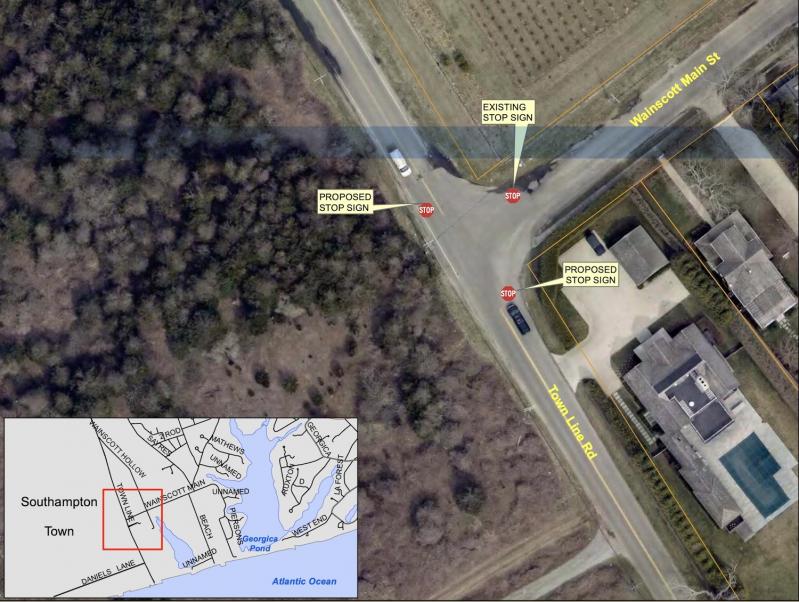 This map of the Town Line Road and Wainscott Main Street intersection shows the locations of two newly proposed stop signs; others are also in the works.
East Hampton Town
By Christine Sampson

The double-yellow stripes running up and down Town Line Road make up the official dividing line between the hamlet of Wainscott and the Village of Sagaponack, in East Hampton and Southampton Towns respectively.

But where it divides, it will also now unite — albeit in the wake of a tragedy. On June 30, an 11-year-old boy riding his bicycle on Town Line Road was struck and killed by a pickup truck backing out of a job site south of Montauk Highway.

Sagaponack Mayor Bill Tillotson and East Hampton Town Supervisor Peter Van Scoyoc agree that it's time something is done about dangerous traffic conditions in the area -- not just on Town Line, but on connecting roads, too, before another disaster occurs. Local lanes were simply not meant to handle the enormous volume of vehicles using them right now, the two officials said this week in separate interviews.

During Tuesday's East Hampton Town Board work session, Mr. Van Scoyoc suggested adding additional stop signs where Town Line Road meets such side streets as Wainscott Main, Daniel's Lane, Hedges Lane, and Parsonage Lane. Town code requires a public hearing each time a stop sign is considered, though the board stopped just short of scheduling such hearings. Councilwoman Kathee Burke-Gonzalez said she wanted to hear first from the Wainscott Citizens Advisory Committee, which is to meet on Saturday.

In Sagaponack, "our ordinances are written in such a fashion that stop signs can be put up immediately," Mr. Tillotson said, but he said the village will wait for East Hampton to hold its public hearings first.

Sagaponack is taking safety improvements a few steps further. A sidewalk is being proposed for the village's side of Town Line Road, as is a turnaround at the beach road end, so that emergency vehicles can navigate more easily. Sagaponack will also direct property owners to get rid of anti-parking devices such as sticks and stones that extend into the public right of way, and landscaping that infringes on village-owned strips as well.

"In the next week or so, letters will go out to homeowners requesting that they remove obstructions, which, generally, people will not do," Mr. Tillotson said. "At some point, we need to have a bid document drawn up by an engineering firm and at that point we can go out to bid on a project where the construction company would remove the obstructions and install the sidewalk."

Sagaponack is also instituting a new policy for construction sites: Commercial vehicles cannot be backed out from driveways. If it cannot be avoided, then a spotter must be stationed in the road to help the driver back out safely.

"I'm very aware of the danger that mirrors don't always provide a clear view," said Mr. Tillotson, who has a commercial driver's license himself. "If you have a vehicle or child on a bicycle, it's quite possible for them to get behind you without you noticing them. It's a real worry. Anyone driving a truck knows the perils of backing up."

Sagaponack has also asked East Hampton to consider restricting parallel parking along its side of Town Line Road. Currently, holders of town beach passes can park there almost all the way to Wainscott Main Street.

In the June 30 accident -- which was one of two fatal bicycle accidents on the South Fork within the span of a week -- no criminal charges were filed. Neither drugs nor alcohol was involved, detectives concluded after subjecting the truck driver to several hours of questioning and testing at Southampton Town police headquarters in Hampton Bays. It was deemed an accident -- a terrible one.

"With our major roadways becoming clogged with traffic, partially due to Waze and Google Maps and other such services, people are being routed on to what were relatively quiet residential streets, to work around traffic," Mr. Van Scoyoc observed. "You have increased volumes of traffic, and you also have people who are driving in excess of the posted speed limits, and that's changing the character of neighborhoods and causing safety concerns."

Just last week, Mr. Tillotson said, Southampton Town police "caught two different people on Hedges Lane going 80 miles per hour. People use it as a bypass and don't stop for stop signs. They are generally disrespectful of people trying to cross the road at the post office. They don't stop for the crosswalk. It's a real problem."

A July 29 memo to the East Hampton Town Board from Jeremy Samuelson, the Planning Department director, shows that there is support within the town for the new stop signs and turnaround proposal. They are part of Mr. Samuelson's formal recommendations to the board.

"Considering recent awareness surrounding the potential for hazardous conditions for both drivers and pedestrians in the area, the Planning Department concurs with additional stop signs for uniformity in these intersections," Mr. Samuelson wrote. "Additionally, the department feels that it's simply in the interest of safety and good traffic conditions for every entrance into that intersection to have its own stop sign. The department believes that this will have a general calming effect on local traffic."