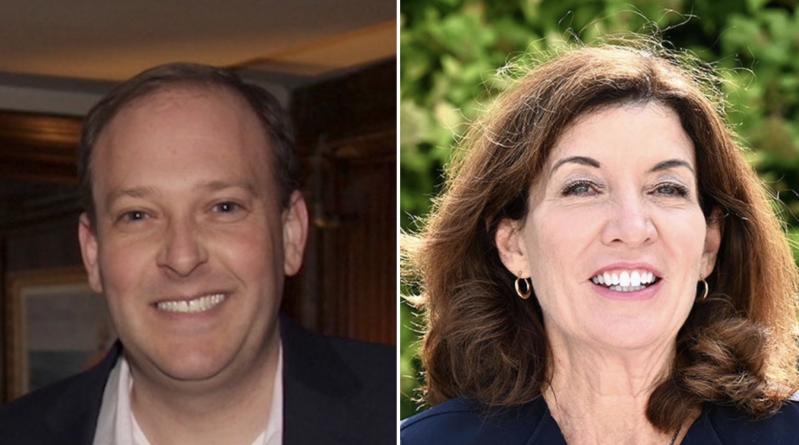 The Nov. 8 midterm elections may be a tough one for Democrats, but three months before Election Day, Gov. Kathy Hochul, the Democratic incumbent, is comfortably ahead of her challenger, Representative Lee Zeldin, in the race for governor of New York State.

Emerson College and Siena College released polls this week, each showing the governor, the former lieutenant governor who assumed the top job a year ago following the resignation of Gov. Andrew Cuomo, with a double-digit lead over Mr. Zeldin, who has represented New York's First Congressional District since 2015.

The Emerson College poll surveyed "very likely and almost certain general election voters" between July 26 and last Thursday. It found that the governor leads by 51 percent to Mr. Zeldin's 35 percent, a 16-point margin. Seven percent plan to vote for someone else (Larry Sharpe is the Libertarian Party candidate), and another 7 percent are undecided.

The governor leads among women by 55 percent to Mr. Zeldin's 26 percent, according to Spencer Kimball, executive director of Emerson College Polling. She leads among men by just three percentage points, 46 to 43 percent. Mr. Zeldin leads the governor by six percentage points in the New York City suburbs, but Ms. Hochul is far ahead in the city, 63 percent to 17 percent. Upstate, the race is neck and neck, Emerson College found.

Mr. Zeldin still suffers, or perhaps benefits, from a lack of name recognition. The Emerson College poll concluded that, while 30 percent rate him favorably versus 29 percent viewing him unfavorably, 41 percent are neutral or have no opinion. The governor, the poll found, has a 44-percent favorable rating versus 39-percent unfavorable. Seventeen percent of those polled are neutral or have no opinion of her.

Democrats holding other statewide offices are also faring well in the campaign, the polls found. State Comptroller Thomas DiNapoli is leading his Republican challenger, Paul Rodriguez, by 51 percent to 30 percent, according to the Siena College poll. State Attorney General Letitia James leads Michael Henry, her Republican challenger, by 50 percent to 36 percent in the same poll. The Emerson College poll has Ms. James up by 50 percent to 32 percent.