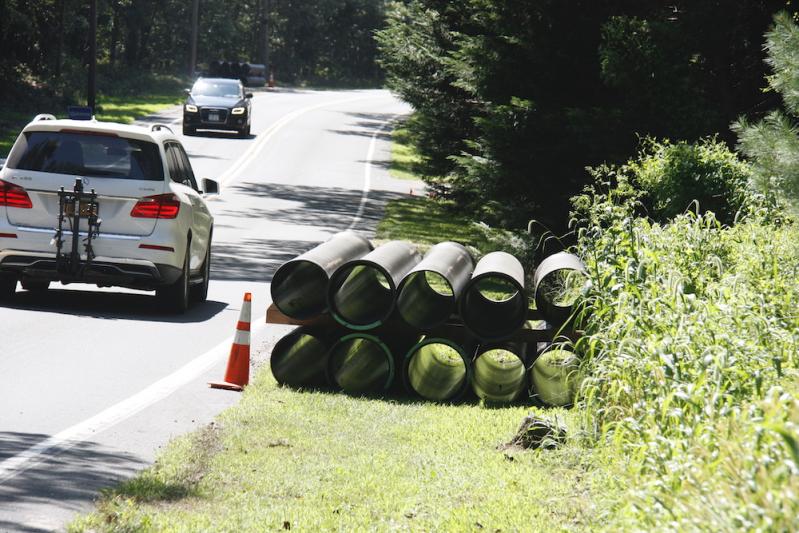 In 2018, public water mains were extended to parts of Wainscott after private wells were found to be contaminated. Residents, however, had to pay to hook up to the mains.
Durell Godfrey
By Christine Sampson

A March 2018 lawsuit filed against East Hampton Town on behalf of Wainscott residents whose wells were discovered to be contaminated with perfluorooctanoic acid (PFOA) and perfluorooctane sulfonic acid (PFOS) is treading water as hundreds of similar lawsuits make their way through the court system.

Justice Richard M. Gergel of South Carolina District Court is scheduled to hear a case tomorrow that could impact quite a few involving municipalities and manufacturers of these pollutants, which are commonly found in firefighting foam, military applications, and consumer goods like nonstick cookware and heat and stain-resistant products. PFOS and PFOA have been linked to health issues such as compromised immune systems, delayed growth in children and fetuses, and cancer. The defendants, many of them working for the military, are citing the “government contractor defense,” saying they were just following orders when they manufactured products containing PFOA and PFOS, which have been found leaching into drinking water supplies across the U.S.

Daniel Osborn, the Southampton attorney who filed the lawsuit on behalf of the Wainscott residents, reported to the Wainscott Citizens Advisory Committee on Aug. 6 that his case is tied up with Justice Gergel’s multidistrict litigation, which Mr. Osborn explained is a “collection of lawsuits where the claims are similar.”

Should Justice Gergel side with the defendants, it would “whittle the case load into a small number of cases,” Mr. Osborn said. “You can’t participate in your own lawsuit — everybody kind of sits back and waits to see what happens in these bellwether trials.”

“The amount of money being sought by the plaintiffs in these cases is astronomical,” he later added. “No insurance company is going to be able to pay what is likely to be substantial eight or nine-figure judgements. My case here looks at the contamination of the airport. . . . To remediate that, to dig it up, and get rid of it or filter it out is going to cost a lot of money.”

Mr. Osborn targeted East Hampton Town in the suit, saying it “negligently and carelessly allowed commercial businesses to operate” on leased land at the East Hampton Airport and on Industrial Road, therefore allowing pollution to “reach the water supply.” In that region, 118 groundwater monitoring wells turned up contaminated water samples.

Mr. Osborn has also taken issue with the town not having reimbursed residents for the cost of getting their houses hooked up to the Suffolk County Water Authority’s municipal water system after the chemicals were discovered. The price tag, Mr. Osborn said, ranged from $500 to “many, many thousands.”

“That is significant because that is the gist of my lawsuit,” he said. Separately, the water authority filed an Eastern District federal court case against the makers of these chemicals, which is also still pending.

In an email, John Jilnicki, the East Hampton Town attorney, said the town “has acted, and continues to act, with New York State Department of Environmental Conservation oversight, approval, and direction at each step of the way. [The] town is currently investigating the source(s) and extent of the contamination at the airport,” he wrote. He declined to comment on active litigation involving the town’s seeking “cost recovery from other parties for these matters.”

Related to these lawsuits is the Environmental Protection Agency’s recent decision to reduce the allowable levels of those chemicals in water, indicating “the level of drinking water contamination below which adverse health effects are not expected to occur,” it said in a press release. In June, the federal entity reduced its 2016 PFOA and PFOS limits from 70 parts per trillion to .004 and .02 parts per trillion, respectively, in acknowledgement that these substances, sometimes called “forever chemicals,” are hard to purge from the environment.