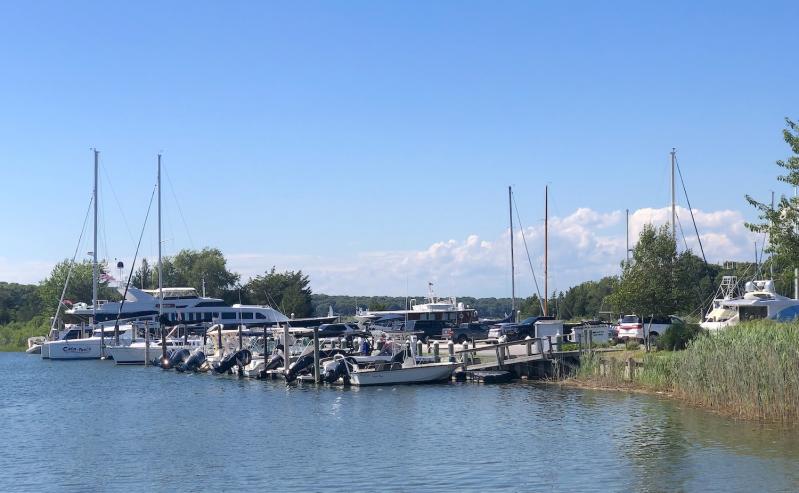 The size of the basin at Gardiner's Marina makes it difficult for some largeer boats to navigate, its owners say.
Carissa Katz
By Christopher Gangemi

Gardiner’s Marina, on Three Mile Harbor in Springs, wants to grow. According to Eric Schantz, assistant director of the East Hampton Planning Department, the marina hasn’t changed much since 1962, and now its owners are before the planning board seeking approval to expand.

The marina, now consisting of a 600-square-foot office building used as a clubhouse, a bulkhead, and 60 boat slips, is controlled by the brothers Mark and Peter Mendelman under the corporate name Harborlands L.L.C. They are not requesting additional slips, they told planning board members on Aug. 19, but they would like to enlarge the boat basin and renovate the existing bulkhead. They also plan to demolish the small office building and build a larger one in its place, along with a small storage building for equipment.

The basin expansion “represents the most significant physical alteration of the proposed project” Mr. Schantz told the board in a memo. “The intention of this expansion is to increase the depth of roughly 10 boat slips to accommodate larger vessels.”

The land just north of the marina is town-owned, purchased with community preservation funding to protect wetlands. “Any project which would adversely impact these protected natural features would be contrary to the Town’s intent in its expenditure to preserve them,” Mr. Schantz wrote.

“We have a very old bulkhead in the eastern and northern portion of the basin,” Mark Mendelman told the board. “It’s deteriorating. We need to do something soon.” The old bulkhead, he said, is made of wood and creosote. “Everything that we’re putting in is all untreated wood, vinyl bulkheading, plastic flotation on any docks. So, zero contaminants in contact with the water.”

“We absolutely love the wetlands,” he added. “We consider ourselves stewards of those wetlands.”

The dredge used in expanding the basin would be kept on site and buried under the asphalt parking lot, he said. The rotting creosote bulkhead would be trucked away.

“All the work that we’re proposing for the ‘bump-out’ of the basin is in a disturbed area,” Mr. Mendelman said. “We’re not going into the wetlands. All the adjacent wetlands will remain as is, and will not be impacted by this project, short term or long term.”

Peter Mendelman displayed pictures of the basin showing the difficulty some larger boats encounter in navigating. “Safety and accessibility is the impetus” behind the basin expansion, he said. Toggling between the existing slip layout and the proposal, he said that “if you blink, you might miss the change. We’re not asking for a major expansion of the basin.”

The brothers would also raise the height of the bulkhead by 18 inches, with an eye on sea-level rise. During Hurricane Sandy, Peter Mendelman recalled, the northern parking lot was under a foot of water. “We think 18 inches will make it good for the next 30 to 40 years. We all know that sea level rise is happening. We all believe it. The hard data is there,” he said.

Randy Parsons, a board member, wondered if the enlarged clubhouse would seek permits for special gatherings or if the owners would apply for a liquor license.

“Absolutely not,” said Mark Mendelman. “No food and beverage and no liquor license. None of that.”

“That clears up a lot,” said Mr. Parsons. “For me, the Natural Resources Special Permit process is going to do a lot of the heavy lifting here.”

According to town code, applicants need such a permit if they’re dredging or building within 150 feet of a wetland boundary. These permits are granted by the zoning board of appeals, not the planning board.

Peter Mendelman said the clubhouse expansion was largely based on the need for the four bathrooms to be A.D.A.-compliant. The second story would be for the dockmaster.

“We don’t really have a good place for our dockmaster to see Gardiner’s Marina and our adjacent marina across the way, which is Three Mile Harbor Marina,” he said.

“Our current dockmaster is well in his 80s,” he added, “and is on an un-air-conditioned bench at Halsey’s Marina and has to go back and forth. We’d like to have a nice spot for him where there’s a bit of an office.”