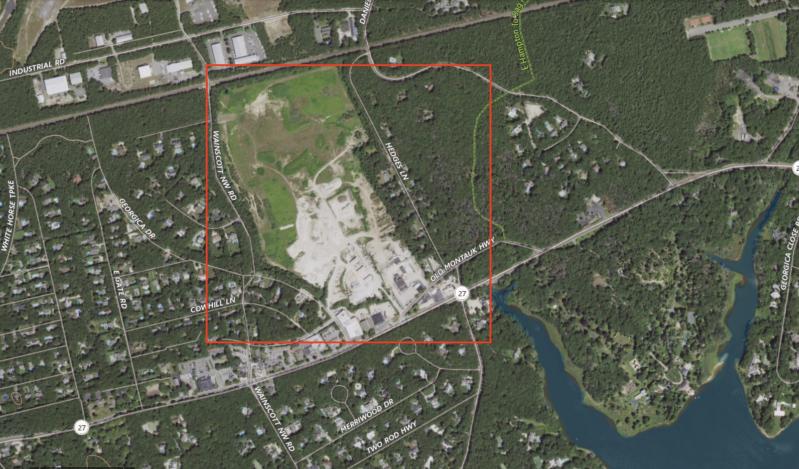 David Eagan, an attorney representing the property's owner, the Tintle family, said in statement yesterday that the family issued "strongly agrees with the coalition's call for the East Hampton Town Board's purchase of a substantial portion of the 70-acre site in furtherance of the Wainscott hamlet plan."
U.S.G.S.
By Christopher Walsh

A coalition has formed to stop the proposed redevelopment of the former Wainscott sand and gravel pit into a 50-lot commercial and industrial subdivision and to advocate instead for East Hampton Town to purchase the property for open space and municipal purposes.

The proposed Wainscott Commercial Center "would be the largest commercial/industrial subdivision in the history of East Hampton" according to a draft statement by the Coalition to Stop the Wainscott Commercial Center, which was obtained by The Star earlier this month. "The looming threat of such an unprecedented industrial/commercial subdivision," more than twice the size of Bridgehampton Commons, "and its related impacts to groundwater and traffic has alarmed members of the East Hampton community," according to the statement, "not only concerned with obvious environmental impacts but with the tremendous hardship to local drivers and business owners already frustrated with traffic in Wainscott."

Former Supervisor Larry Cantwell is quoted in the group's statement as saying, "Imagine the traffic from 50 new commercial businesses entering and exiting Montauk Highway in Wainscott, an area of the highway already so far over capacity, it is rated near failure" by the New York State Department of Transportation.

"At full build-out, an additional 600 trips/hour would be generated during peak weekday and peak weekend hours," the coalition's statement says. "Increased tractor-trailer and truck traffic during construction and afterwards will have serious impacts on both Montauk Highway and nearby quiet residential roads."

Groundwater under the proposed subdivision flows directly into Georgica Pond, the statement continues, "a wetland and water body of 'locally significant coastal fish and wildlife habitat,' " according to the town's Local Waterfront Revitalization Program, and part of a New York State Scenic Area of Statewide Significance.

The proposed subdivision is within the 10-year groundwater travel time to Georgica Pond, the statement adds. "This zone is ranked by the Town of East Hampton as the most important area to upgrade existing septic systems thereby reducing nitrogen concentrations in wastewater." Excessive levels of nitrogen traveling from the watershed to the pond are blamed for promoting the toxic cyanobacteria, or blue-green algae, that have beset the pond during the summer for the last decade, causing low oxygen conditions and killing marine life.

The 70.5-acre site, and how it might be used in the future, was scrutinized by the working group that met several times earlier this year to plot implementation of the Wainscott hamlet study's recommendations. Redevelopment of the site was deemed a nonstarter by the group, which felt that it would clash with the town's environmental goals. Instead, according to results of a poll among the group, the property should be acquired for parkland and moderate income housing. But comments also included a wish for no residential development of any kind.

Jeremy Samuelson, the town planning director, told the working group in May that the developer wants to create a new subdivision of 50 lots ranging in size from around one acre to around six acres. An existing cement plant and mason supply yard would remain, he said. Total coverage, including all built components such as buildings, roads, and sidewalks, was estimated at 45 percent. The allowance in a commercial-industrial zone is 75 percent. The parking calculation for the total number of spaces required to accommodate the proposed uses is 874.

The coalition's statement lists members including the Group for the East End, Defend H2O, the Friends of Georgica Pond Foundation, Build In Kind, the Surfrider Foundation's Eastern Long Island Chapter, the Perfect Earth Project, the Wainscott Heritage Project, and Wainscott United. Also listed are almost 70 residents, many of them members of the Wainscott Citizens Advisory Committee as well as former supervisors Mr. Cantwell and Judith Hope.

The coalition was discussed earlier this month during a video conference in which participating groups included the Friends of Georgica Pond Foundation; Changehampton, which promotes biodiverse and sustainable landscaping and an expansion of "pollinator pathways" on eastern Long Island, and Build In Kind, which according to its website aims to "restore rational restraint and inspire desire for more modulated proportions in order to mitigate the negative impact of development activity" on the town.

Supervisor Peter Van Scoyoc said last week that he was not aware of the coalition. "We recognize that this property has the potential to greatly impact the future of Wainscott and the town at large in either a negative or positive way," he told The Star. "Our goal is to reach the best possible outcome for all involved."

David Eagan, an attorney representing the property's owner, the Tintle family, said in statement yesterday that the family issued "strongly agrees with the coalition's call for the East Hampton Town Board's purchase of a substantial portion of the 70-acre site in furtherance of the Wainscott hamlet plan. In fact, the hamlet plan's conceptual vision for the property cannot be legally implemented without the town’s purchase of lots for use as public park, housing, a future train station, and other municipal purposes."

The owner "has been crystal clear in all its statements and documents (including the draft environmental impact statement supporting its preliminary subdivision application currently under review) of its willingness to work with the town board toward those purchases."
--
Correction: The original version of this article in print and online contained an error. The Coalition to Stop the Wainscott Commercial Center stated that at full build-out, an additional 600 trips per hour would be generated during peak hours by the proposed center, not 600 trips per minute.