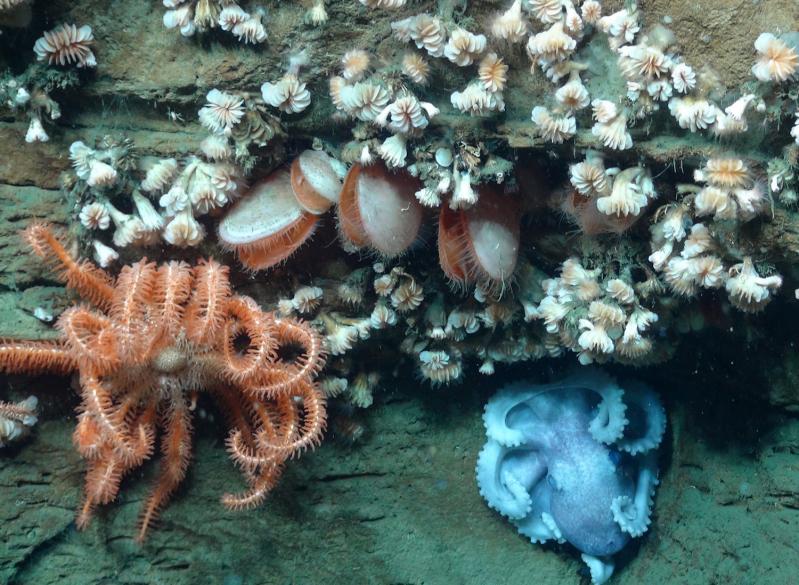 An octopus, sea star, bivalves, and dozens of cup coral all share the same overhang.
NOAA
By Christopher Walsh

The Biden-Harris administration has announced that the National Oceanic and Atmospheric Administration is initiating a process to designate Hudson Canyon as a new national marine sanctuary.

Hudson Canyon is America’s deepest canyon in the Atlantic Ocean. Beginning approximately 100 miles southeast of New York City, it extends about 350 miles seaward, reaching depths of 2 to 2.5 miles, and is up to 7.5 miles wide. It is partially located in the New York Bight, a triangular area between Montauk Point and Cape May, N.J.

The announcement was one of several aimed at conserving and restoring the health and productivity of the oceans made on June 8, which is World Ocean Day. President Biden had previously proclaimed June as National Ocean Month.

The canyon is “an ecological hotspot,” according to a White House fact sheet, “providing habitat for endangered, protected, and sensitive species” including sperm whales and sea turtles. The canyon also features deep sea, cold-water coral communities, and contains various shipwrecks, including freighters and United States military radar platforms, dating to the mid-19th century.

NOAA will seek public comment on the potential boundaries for the sanctuary and other factors related to its future management through Aug. 8. While a sanctuary designation would close the area permanently to oil, gas, and mineral exploration and extraction, the agency makes no explicit mention of restrictions or prohibitions on fishing. “The area’s rich biodiversity is integral to the regional economy, underpinning commercial and recreational fisheries, recreational diving, whale watching, and birding,” according to the sanctuaries page on NOAA’s website.

The designation’s primary goals are to “support conservation of the area’s marine wildlife, habitats, and maritime cultural resources,” work with Indigenous tribes and nations to identify Indigenous connections to the area, “highlight and promote sustainable uses of the area,” expand ocean science and monitoring in the area, and provide a platform for partnerships that support long-term management of the area.

Among other things, NOAA is seeking input on boundaries for the pro posed sanctuary; the location, nature, and value of natural and cultural resources in the area; specific threats to those resources, and regulations most appropriate for management.

Senator Kirsten Gillibrand of New York called for the sanctuary designation in an April letter to Richard Spinrad, NOAA’s administrator. “The robust biodiversity of the canyon directly supports our regional marine-based economy by providing productive waters and habitats for the fish and invertebrates that our commercial and recreational fisheries depend on,” she wrote. She suggested that fisheries within the canyon “continue to be managed through existing regional and federal structures and not through any management plan associated with the sanctuary designation process as long as their effective management maintains fish populations in healthy conditions.”

But commercial fishermen harbor an inherent suspicion of government-imposed management, one said this week. “Hudson Canyon is probably the most important recreational and commercial fishing area in the mid-Atlantic,” Dan Farnham Sr., who has caught tilefish in the area for more than 40 years, said on Monday. “I would say 60 to 70 percent of our catch comes from the canyon area.”

Mr. Farnham said that he worries that the ultimate goal is to ban commercial fishing in the proposed sanctuary, which “would be financially devastating to us.” It would have other consequences as well, he said. “If you take an area like that and rope it off, we’re still going to fish. It’s going to create localized depletion.” The tilefish fishery, he said, is “extremely well managed, there’s very little bycatch. It’s probably one of the cleanest fisheries on the east coast.”

“Both the recreational and commercial sector have been down this road,” Mr. Farnham said. “We bear regulations that sometimes are not needed.”

Last Thursday, American Sword and Tuna Harvesters, which represents fishers, fish buyers, vessel owners, and support businesses, issued a statement in opposition to the canyon’s sanctuary designation. A commercial fishing ban “has the potential to cause the collapse of the East Coast commercial fishery,” its statement read.

But Gaelin Rosenwaks, a marine scientist and explorer who lives in Montauk, sees only positives in the proposed sanctuary designation, calling it “very exciting and a positive step toward protecting our precious offshore habitat and the animals that use it. The sanctuary would prevent any future oil, gas, and mineral development, a vital step in ensuring that the tremendous biodiversity found in the canyon is not destroyed. Creating a sanctuary is the best and most effective way to prevent this type of exploitation while still allowing for fishing, both recreational and commercial. It’s a win-win, the habitat is protected so that all of the creatures using it can thrive for years and generations to come and fisheries are still managed by their existing regulatory authorities. It is an important step to preserving this ecological treasure right off of our coast.”

NOAA will hold virtual public meetings next Thursday from 3 to 5 p.m. and on Aug. 3 from 5 to 7 p.m. In-person public meetings will happen on July 19 and 21, both from 6:30 to 8 p.m. The July 19 meeting will be at the Alexander Hamilton U.S. Customs House in Manhattan, and the July 21 meeting will be at Monmouth University in West Long Branch, N.J.

Also announced by the White House on June 8 was a phaseout of single-use plastics in national parks, wildlife refuges, and other public lands. More than 14 million tons of plastic enter the ocean every year, according to the fact sheet. Additional announcements included the launch of efforts to create the nation’s first-ever Ocean Climate Action Plan, and an initiative to center environmental justice in ocean science and technology activities and investments.

Further announcements showcasing the administration’s ocean agenda including investments in coastal resilience and restoration, the rapid deployment and construction of offshore wind farms, engagement with the international Ocean Panel to spur sustainable ocean economic development, and the use of science to guide ocean planning and management are to be made throughout this month.