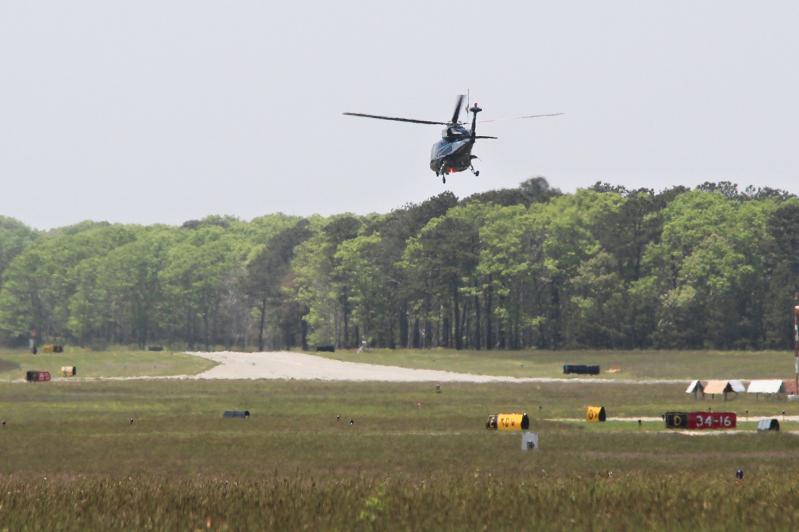 With East Hampton Town barred from enforcing new restrictions at its airport, Memorial Day weekend was as busy as ever there.
Durell Godfrey
By Christopher Walsh

Air traffic to and from East Hampton Airport was typically brisk over the Memorial Day weekend, the temporary restraining order granted by a New York State Supreme Court Justice having halted the town board’s plan to briefly close the airport last month and reopen it as a private facility with advance permission required for takeoffs and landings.

On the ground, the standoff between the town and groups who have sued to obtain a preliminary injunction remained in a holding pattern this week. Despite Justice Paul Baisley’s May 16 order granting the order and directing the town to show cause last Thursday as to why a preliminary injunction should not be granted to the plaintiffs, no hearing took place. Rather, that date was the deadline for submission of additional briefings, after which Justice Baisley is to issue a decision.

“The T.R.O. remains in full force and effect,” Randy Mastro, an attorney representing Blade Air Mobility, which allows users of its app to book seats on scheduled helicopter and airplane flights, said on Tuesday. “That T.R.O. has very specific terms about not being able to close” the airport “or impose use restrictions. Full public access remains available at the airport.”

Blade Air Mobility, along with East End Hangars and the Coalition to Keep East Hampton Airport Open, as well as several individuals who live near airports that could see increased traffic should the airport in East Hampton be off limits, sued the town in February to stop its plan to address growing complaints about noise and pollution. The plan called for limiting aircraft operators to one takeoff and one landing per day and would have included restrictions based on the size and noise of aircraft. Aircraft operations would have been limited to 8 a.m. to 8 p.m. Monday through Thursday and 9 a.m. to 7 p.m. Friday through Sunday and on federal holidays.

Blade’s officials previously said that at least 60 percent of flights booked through its platform that would have landed at East Hampton Airport will be diverted to “other landing areas” including Montauk Airport, “seaplane landing zones” in Gardiner’s Bay and Peconic Bay, and sites in Southampton, Mattituck, and Westhampton Beach.

“I’m a little concerned,” Supervisor Peter Van Scoyoc said on Tuesday, referring to Justice Baisley. “I’m concerned that if he doesn’t act, it’s status quo for yet another season. People are becoming extremely frustrated. It seems to be undemocratic when you have a majority saying they want change at the airport and the governing body in charge has worked extremely hard to make that come to pass. We’ve coordinated with the federal agency involved” — the Federal Aviation Administration — “to come up with a plan and implement a solution, and a few individuals and for-profit corporate entities work to subvert the will of the people.” He said that he remains hopeful for a ruling “that will be favorable to us, so we can move forward with implementing our plans.”

Mr. Van Scoyoc has repeatedly said that the town reserves the right to close the airport, should it be prevented from imposing restrictions on aircraft operations. During the May 16 hearing, William O’Connor, an outside counsel for the town, implied to Justice Baisley that issuance of a T.R.O. might hasten that outcome.

It was perhaps with that in mind that one pilot, who is the president of Hampton Hangars Inc., a plaintiff in the East End Hangars lawsuit, told The Star last week that his constituents who own hangars and fly single-engine aircraft “would not be unhappy” with a prior-permission-required framework as enumerated by the town, “subject to there being some modification of restrictions.”

On Tuesday, Kathryn Slye of the East Hampton Aviation Association, which represents mostly local pilots and owners and operators of aircraft based at East Hampton Airport, acknowledged “legitimate noise complaints” from people “truly affected by jets and helicopters flying directly over their homes at a frequency that is too much for them,” and argued for direct negotiation with the town to reach a compromise that is not “unnecessarily punitive against local aviation.”

“I don’t know why it’s become as difficult as it has,” Ms. Slye, who has been one of the town board’s most caustic critics with respect to its plans for the airport, “because I think it’s absolutely achievable and we’re all for it.” But the town’s planned restrictions, she said, are disproportionate and would prove ineffective in achieving its stated goals. She cited the recently raised landing fees, which she said are exorbitant for small, locally-based aircraft, and the limitation of one takeoff and one landing per day, which she said amounts to “a total ban on flight training.”

The town, she suggested, might make exceptions to its planned curfew, applying it to transient aircraft and not small planes based at the airport, for example. Had the curfew been in place on Monday, she said, such pilots would not have been able to participate in a Memorial Day flyover at Calverton National Cemetery.

“We are still very hopeful,” she said, “that maybe, instead of litigating, the town will take a pause and sit down and work with aviation, especially the local community, so that we could come up with something that works.”

A Conference for Young People to Create Solutions
Get Outside, Get Moving
Two Traditions, One Fair in Springs
END_OF_DOCUMENT_TOKEN_TO_BE_REPLACED