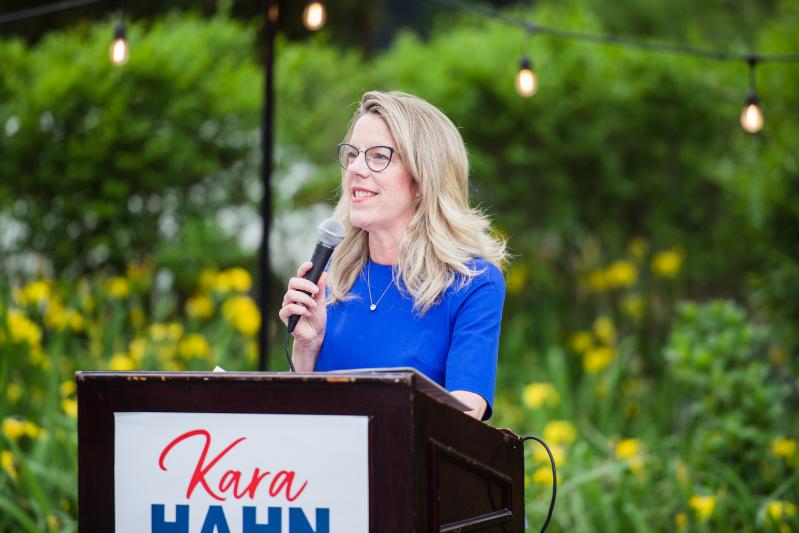 Kara Hahn’s departure from the primary race in the First Congressional District essentially clears the way for Bridget Fleming, her Democratic colleague.
Courtesy of the Hahn campaign
By Christopher Walsh

Suffolk County Legislator Kara Hahn has announced the suspension of her campaign for the Democratic Party nomination to represent New York’s First Congressional District, and has endorsed the candidacy of Bridget Fleming, her colleague in the Legislature.

The departure of Ms. Hahn, a native of Stony Brook, and Jackie Gordon’s announcement last week that as a result of the recently redrawn congressional map she will seek the Democrats’ nomination in the Second District, essentially clears the field for Ms. Fleming, a former Southampton Town councilwoman who lives in Noyac. Ms. Fleming is making her second bid for the seat held by Representative Lee Zeldin, who is seeking the Republican Party’s nomination for governor of New York.

In a statement issued on Sunday, Ms. Hahn stressed the importance of flipping the First District, which has historically been held by both major parties but has been in Mr. Zeldin’s hands since his election in 2014. “Democratic unity is the most important thing we can bring to the fight to flip NY-01 this year,” she said. “I’m convinced that drawing out a contested primary through late August will prove fatal to the Democratic candidate. Thus, to ensure Democrats have the best chance to flip this seat, I am suspending my campaign and will support my colleague Bridget Fleming.”

The First District’s boundaries were little changed by the neutral expert charged with drawing new district boundaries after the congressional and State Legislature district maps drawn by the Democratic-dominated Legislature were declared unconstitutional on March 31. The primary election was consequently postponed from June 28 to Aug. 23.

Ms. Hahn, who won the endorsement of the last three Democratic nominees for the First District, pledged to remain active in the midterm election campaign. “While I’m stepping aside today as a candidate, I will not stay on the sidelines in this election,” she said. “With the future of our democracy, fundamental rights, and the environment at stake, we have a critical mission. I hope all my supporters will join me on the campaign trail helping to elect our fellow Democrats up and down the ballot.”

“I’m incredibly proud of the grassroots, issues-based campaign we ran, and I can’t thank my supporters and volunteers enough for believing in me and investing in our people-powered campaign. Service has been a constant in my life, and I will continue to find ways to make a positive impact for Long Islanders in the Suffolk County Legislature and beyond.”