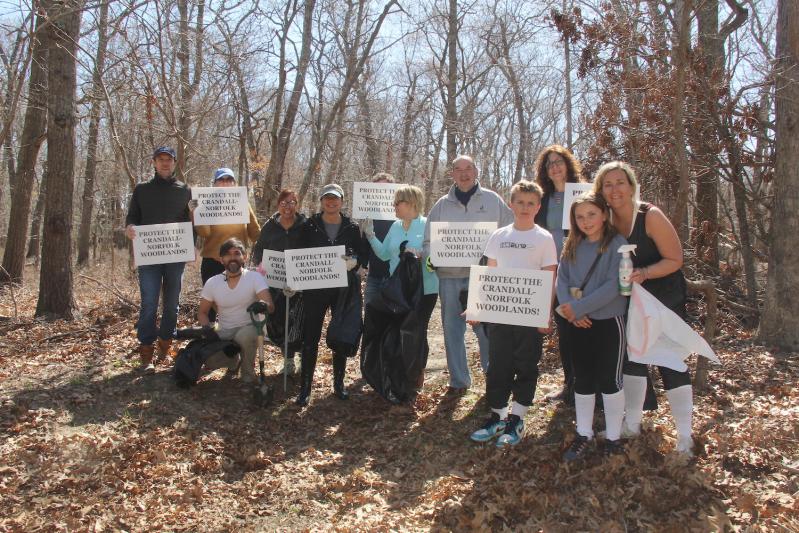 Having beaten back a plan to site a 180-foot tower to house emergency and personal wireless communications equipment in the woodlands of their neighborhood, a group of Springs residents is now asking East Hampton Town to make the approximately seven wooded acres a nature preserve.

Residents of the woodlands surrounded by Crandall Street, Norfolk Street, Lincoln Avenue, and Fort Pond Boulevard became alarmed last summer when they learned that the area had been identified to site the monopole that is a key component of the town's overhaul of its emergency communications upgrade. Concerned about the woodlands, which generations of adults and children have used informally as a park, and about the safety and value of their properties should such an installation be sited in the middle of their neighborhood, they loudly complained to the town board.

Ultimately, a portion of Camp Blue Bay on Flaggy Hole Road, owned by the Girl Scouts of Nassau County, was determined as a site for the tower, though it has yet to be installed.

The site comprises seven lots. Two of them are collectively around 4.3 acres and several decades ago were used for excavation.

"It was most certainly active in the '50s," said Richard Whalen, chairman of East Hampton Town's Nature Preserve Committee. By 1978, he said, much of the area had revegetated naturally. Three additional parcels totaling a half-acre were acquired by the town from Suffolk County in 2013, and two others totaling 1.15 acres were acquired the following year. The parcels also include "paper" roads that were laid out but never constructed, bringing the parcels' total to 7.1 acres.

Written nominations for inclusion in the town's nature preserve must be referred for evaluation to the Natural Resources Department, the Planning Department, or both. The Nature Preserve Committee is an advisory board tasked with making recommendations to the town board.

Their immediate concern alleviated, the residents have since turned their attention to seeking a designation that would permanently protect the woodlands from any type of development. Some of them attended the Nature Preserve Committee meeting last Thursday, where they made a case for the woodlands' inclusion.

The site's characteristics more than satisfy the criteria for inclusion in the nature preserve, they said, including habitat for box turtles, a species of special concern in New York State, and for much other wildlife; vulnerable geological features such as deep slopes; outstanding examples of natural communities well suited for environmental education programs, and its provision of an essential buffer to existing protected land and open space.

But beyond those features, the residents argued, the woodlands have been used as a park for at least four decades, with activities like dog walking and birdwatching. Several testified about children riding bicycles, sledding, and building "forts" there, and pushed back on suggestions that motorized dirt bikes were ever used there.

"It's one of the last open spaces and slice of wilderness in our community and is cherished by local residents," Joseph Segilia told the committee. Last year, he noted, more than 600 people signed a petition to the town board seeking the woodlands' protection.

"One option just short of nature preserve," Mr. Whalen said, "would be designating it formally as parkland." That would allow construction of playgrounds or tennis courts on the site, he said. "I'm curious what the community thinks about that."

That, said Margaret Garcetti, a resident of the neighborhood, "would be the antithesis of what this area is about." Others agreed.

Mr. Whalen said on Tuesday that the suggestion was made in the event that the town board might want to create a site for recreation in Springs. "There aren't many places to put it" in the hamlet, he said of recreational space. "If you designate land as parkland, you can still use it for active recreation." Designating the land as a nature preserve would prohibit clearing or, for example, construction of playing fields.

Just five of the committee's 11 members were present at the meeting. Mr. Whalen said he hopes the committee will vote on the woodlands' future at its next meeting, on June 9.

Mashashimuet Park's History and Future
A Conference for Young People to Create Solutions
Get Outside, Get Moving
END_OF_DOCUMENT_TOKEN_TO_BE_REPLACED