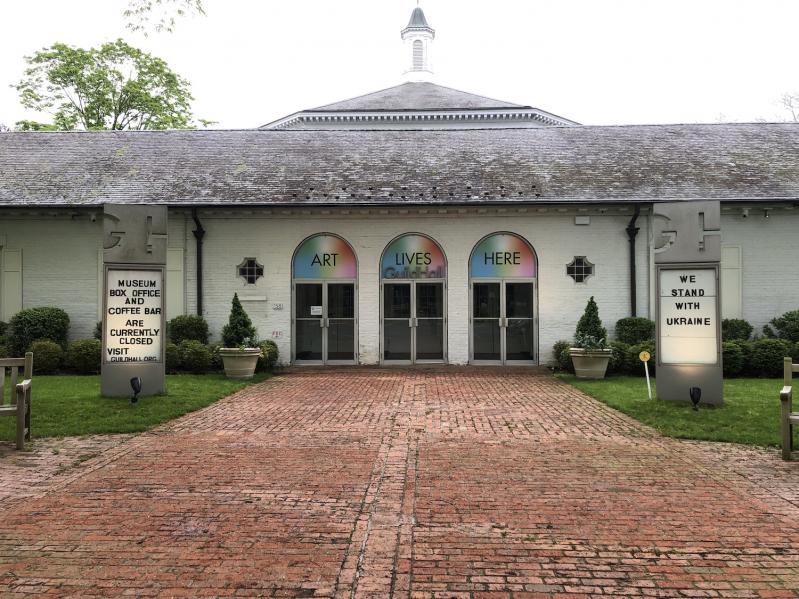 Guild Hall is listed on the National and State Registers of Historic Places and is a locally designated landmark, but its interior spaces are not regulated under the village's preservation laws.
Carissa Katz
By Christopher Gangemi

Both the East Hampton Village Zoning Board of Appeals and Design Review Board, at times appearing frustrated by questions of overlapping or insufficient jurisdiction, signed off unanimously last week on improvements sought by Guild Hall to its exterior.

Both boards made it clear that they had no control over the more controversial future of the John Drew Theater and its iconic "circus tent" roof, leaving all the drama inside the building.

In fact, as it turns out, no village agency has that legal authority. For while Guild Hall is listed on the National and State Registers of Historic Places (as a contributing resource of the East Hampton Village Historic District), and is a locally designated landmark, interior spaces are not regulated under the village's preservation laws.

"It's entirely up to the board of Guild Hall. Nobody else has control over their interior but their board of trustees," said Robert Hefner, former director of historic services for the village, in a phone interview.

The Z.B.A. determined that the exterior changes to the building posed no significant environmental impacts, and then had a very brief discussion, having already heard the application on April 8, on input from the public. Several residents spoke in support of the application. Of the negative comments received, Philip O'Connell observed that most were related to the theater, over which, he reiterated, the zoning board has no control.

Most of the negative comments concerned Guild Hall's request to have tables and chairs in the front of the building, on the grounds that outdoor seating would ease the lobby crunch during intermissions.

Mr. O'Connell, who was chairing the meeting in the absence of John McGuirk, noted that the Z.B.A. had already taken steps to mitigate the critics' concerns. There would be no live music, it decreed, no umbrellas, and no wait service at the tables, which would be removed at the end of each business day. Only 18 chairs will be allowed at six tables, subject to annual review.

"The village preservation committee should be called for comment and input prior to the certificate of appropriateness being granted" by the Design Review Board, said Joe Rose, a member of the zoning board.

"Just to be clear, that's within the purview of the D.R.B., and they'll make that determination if they see fit," said Vincent Messina, the village attorney.

When the D.R.B. met on Tuesday, however, it added no new restrictions to Guild Hall's application, despite a May 5 letter from Sarah Kautz, director of preservation at Preservation Long Island, in which she encouraged the cultural center to follow the Secretary of the Interior's "Standards for the Treatment of Historic Properties."  Ms. Kautz, who called in to the meeting, sounded frustrated in her failure to get a response from the board. "No one answered my question as to whether or not the Guild Hall application meets the Standards," she told The Star in an email.

Peter Pennoyer, principal architect for the renovation, said its intent was to "bring this back to the original [1931] architecture of Aymar Embury. Restoring each facade while improving accessibility."

Robert Caruso, chairman of the D.R.B., said the exterior changes, specifically the removal of aluminum doors installed in the '50s, "makes Guild Hall look like it was from the very beginning."

But Sherrill Dayton, a member of the design review board, said the circus tent ceiling was "one of the main things that makes Guild Hall, Guild Hall. My neighbor and his father did all the striping of the circus on the ceiling. It would be terrible if they did away with that."

His criticism, as Mr. Hefner said, was moot: Design Review input is limited to the outside renovations only.

Despite the Z.B.A.'s restrictions on the tables and chairs, there was still some discussion about them. "I think they're not really needed and destroy the historic integrity of the building," Mr. Dayton said.

Mr. Messina pointed out that "the tables were in the jurisdiction of the Z.B.A." The D.R.B., he said, couldn't comment on them one way or another, as they are already approved.

Andy Goldstein, a lawyer, speaking for Guild Hall, commented that "the population of the Village of East Hampton is an aging population. Every census supports this."

Mr. Caruso said the point was well taken. "When you age," he said, "you like to sit down." He dismissed some of the criticism raised by Ms. Kautz in her letter. "You have to use something called logic. If you're going to restore something to 1640, are we supposed to use candles? Or can we use light, so elderly people don't trip and fall into a manhole?"

"The design of the tables and chairs -- is that something that's under our purview?" asked Ann Duffey, a D.R.B. member, indicating that she hoped it was.

Mr. Goldstein didn't want to see the application held up over chairs. "There's a timeframe in which they have to get a building permit, based on the Z.B.A.," he said.

Before 1973, when Guild Hall was accredited by the American Association of Museums, there were seating areas in the galleries for use during intermissions, said Andrea Grover, executive director of Guild Hall. All those seats were removed "as the museum professionalized," meaning that people had to find somewhere else to go during intermission.

"You'll see 360 people coming out of the theater, with walkers and canes, trying to cram into the lobby before they spill out onto the sidewalk," where, she said, they end up standing for 30 minutes. Outdoor seating, she said, is a matter of safety, comfort, and enjoyment, noting that a third of Guild Hall's members are older people.

"People who criticize the tables, which will be and can be removed, are people who probably do not frequent Guild Hall," said Mr. Caruso. The board then voted unanimously to grant Guild Hall a certificate of appropriateness for its exterior renovations.

Guild Hall can now obtain a building permit and begin work, doing whatever its board and administration decide, to the interior.